Which company slings the better pie for investors?

With all of the technological, political, and sociological disruption going on in the markets, there is one constant in American life that will always thrive: pizza. Whether in bull markets or bear markets, recessions or boom times, on special occasions or for everyday meals, people love a hot, fresh pizza -- especially one that's delivered to them quickly and affordably.

So now seems like a great time to dissect two of the pure plays in the pizza delivery space: Domino's (DPZ 3.08%) and Papa John's (PZZA 1.39%). Which national pie-slinger is the better buy today? Which pizza chain is the better fit for your portfolio? Image source: Getty Images.

Of course, a franchise model doesn't mean much if you can't grow sales. In restaurants, there are several aspects to growth, including adding more stores and boosting sales at existing locations. Same-store sales are usually looked at as a barometer of retailer health. Here are growth metrics for these two companies.

On almost every count, it's no contest: Domino's seems to have the secret pizza sauce. It wins on unit growth, domestic same-store sales, and overall revenue growth, while barely trailing Papa John's in international same-store sales.

How do each of these companies stack up valuation-wise? Let's take a look at two different measures of performance. The first is the forward price-to-earnings ratio, which uses earnings estimates and the stock's per-share price to value a stock. The second is the enterprise value-to-EBITDA ratio, which counts both the company's equity and debt, divided by its earnings before interest, taxes, depreciation and amortization. 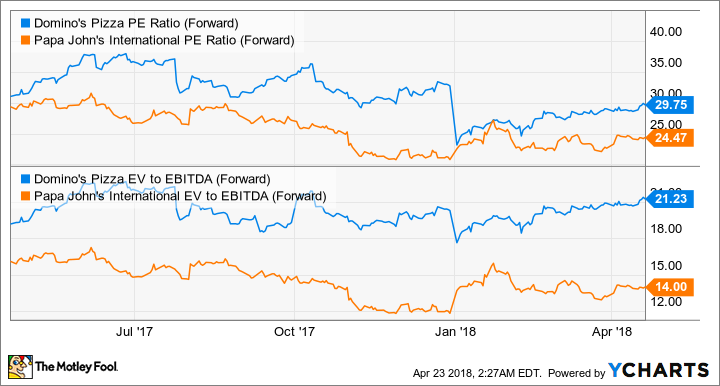 That's because Domino's has less depreciation than it otherwise would, due to not owning as many stores, equipment, and fixtures -- an effect of having a more franchise-based business model. Also, due to its less risky profile and strong operating performance, Domino's has taken on much more debt to fund shareholder returns, as you can see from the debt-to-EBITDA ratios in the chart below. 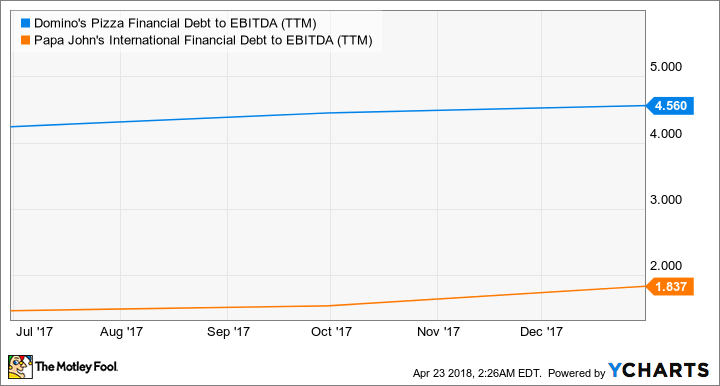 Papa John's has less debt and is also less expensive, so it gets the nod here.

Despite Papa John's having less debt and a lower valuation, I'm going with Domino's as the better buy. The company's emphasis on value, speed, technological innovation, and franchising seems to have given it a more dynamic business model, resulting in faster growth and higher returns. To me, that offsets the lower valuation of Papa John's. With forward price-to-earnings ratios in the 20s, neither is especially a value stock, and Domino's is clearly growing faster. Therefore, I'm going to go with the growth -- and that's clearly Domino's.