There was never any doubt that Disney's (NYSE:DIS) Avengers: Infinity War would become a Hollywood event and produce some of the highest ticket sales of all time. With a decade of Marvel superhero blockbusters as a backdrop, bringing together Earth's mightiest heroes to battle an intergalactic foe almost assured the film a place in box office history.

But the recent and unprecedented success of Black Panther, the latest entry in the Marvel canon, has given a boost to already high expectations. With excitement building in advance of the culmination film's release this weekend, there is speculation that it could not only top Black Panther's success, but also break the all-time record for opening weekend box office. 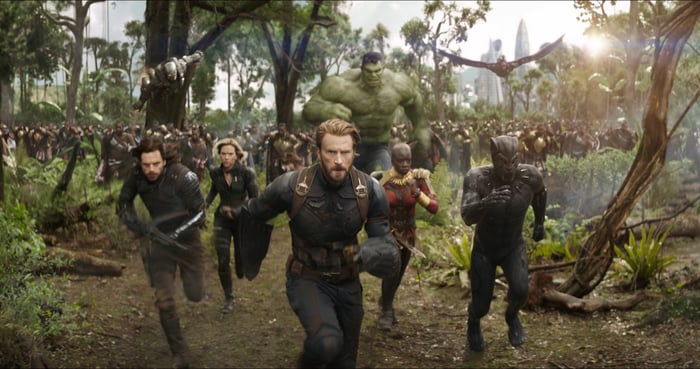 A decade in the making

Avengers: Infinity War has already broken a number of presale records in the weeks leading up to the film's release. Ticket sales outlet Fandango reported that the movie only took six hours to break the record for advance ticket sales for superhero movies, wresting the crown from recent titleholder Black Panther. Earlier this month, the tentpole was outselling the presales of the last seven Marvel movies combined, and had sold twice as many tickets as Black Panther at the same time in the presale cycle.

Expectations have been through the roof in recent days, and reports indicate that more than 1,000 screenings have already sold out. Theaters are also reacting to the record-setting demand by adding additional screens and show times.

Only five films in history have ever exceeded $200 million in box office on their opening weekend -- including Black Panther -- and Avengers: Infinity War seems destined to join that list.

Marvel entries account for half of the top 10 all-time opening weekends in terms of box office. But until now, none was able to duplicate the success of the original Avengers movie, which debuted in 2012. Black Panther was a few million dollars shy of achieving that feat, but it might now be bested when the heroes team up to save the planet, yet again.

Box office tracking currently shows the film headed for a monstrous opening, but just how big remains to be seen. While the movie was originally expected to launch at between $175 million and $200 million, projections have been increasing, and are currently in a range of $190 million to $235 million.

By achieving any more than the low end of current expectations, Infinity Wars will likely take down Black Panther. At the higher end of projections, the Avengers could be within striking distance of $248 million -- the record set by Star Wars: The Force Awakens in December 2015.

Black Panther achieved that highest-ever superhero movie rating on aggregation site Rotten Tomatoes, and the film went on to achieve $1.32 billion in worldwide box office. Whether or not Avengers: Infinity War takes down its feline competitor, one thing's for sure: Marvel has another blockbuster on its hands.