Please ensure Javascript is enabled for purposes of website accessibility
Log In Help Join The Motley Fool
Free Article Join Over 1 Million Premium Members And Get More In-Depth Stock Guidance and Research
By Daniel B. Kline – Apr 25, 2018 at 6:18AM

Before "Earth's mightiest heroes," showed up, the entertainment powerhouse had been hit and miss with its live-action film efforts.

When Walt Disney (DIS -1.39%) bought Marvel for $4 billion in 2009, the entertainment giant's future as a producer of non-animated box office hits looked shaky. Disney already owned Pixar and its self-titled animation division, but its record with live-action films had been mixed, to say the least.

The Marvel purchase gave Disney a hit factory that has proved capable of delivering multiple blockbusters every year -- certainly not something anyone could have predicted when it made the deal. Yes, superhero movies had generally done well at the box office, but pre-Disney, the Marvel Cinematic Universe movies ranged from mild to middling successes.

The Incredible Hulk took in $263 million globally for Comcast's Universal, while Viacom had more success with Captain America: The First Avenger ($370 million). In reality, only Paramount's Iron Man ($585 million) and Iron Man 2 ($623 million) suggested just how big the Avengers -- and the MCU -- could become. 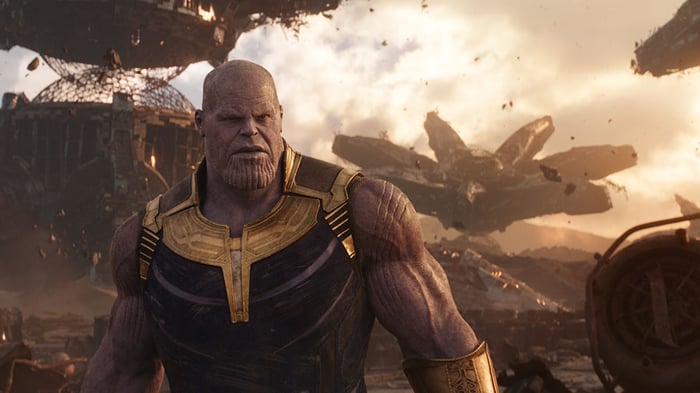 Thanos (pictured) is the villain in the new Avengers movie. Image source: Marvel.

In many ways, Iron Man 2 was really just the start of The Avengers' transformation into box office gold. That first Avengers movie set a new standard for Marvel releases and it, along with Iron Man 3, built Disney a lot of goodwill among moviegoers and comic book fans.

That allowed it to bet heavily on films featuring lesser-known Avengers like Ant-Man, and Avengers-adjacent characters with Dr. Strange and the Guardians of the Galaxy, a blockbuster that defied initial box office projections.

A foundation for Disney

The Avengers and the expanded Marvel Cinematic Universe have provided a non-animated bedrock for Disney to build on. The Mouse House topped all studios at the box office in 2017 and 2016, while it came in second in 2015, 2014, and 2013, according to data from Box Office Mojo. Prior to that, you'd have to go all the way back to 2006 to find a year where Disney came in higher than third.

Notably, Disney also acquired LucasFilm in 2012. That certainly helped solidify its live-action capabilities, but it didn't pay off until the company released Star Wars: The Force Awakens in 2015. And of course, that franchise is on a one-release-a-year schedule.

So far in 2018, Disney has released Black Panther, and has Avengers: Infinity War next up, followed by Ant-Man and The Wasp in July. Essentially, the Marvel/Avengers universe has given Disney a blueprint it can follow with its expanded Star Wars universe, and as close as you get to a guarantee of hits in the movie business.

Viewers trust that these movies will deliver, and when they exceed  expectations -- like Black Panther did -- the ceiling is very high. Avengers: Infinity War should continue the company's box office dominance, giving it another billion-dollar-plus hit.