Our team of investing experts thinks these growth stocks are just getting warmed up.

"Buy low, sell high" is an investing idiom that we Fools don't take all that seriously. In fact, we generally believe that winners tend to keep on winning, which is why we will happily buy a stock that has already enjoyed a terrific run if we believe that the business can continue to execute. 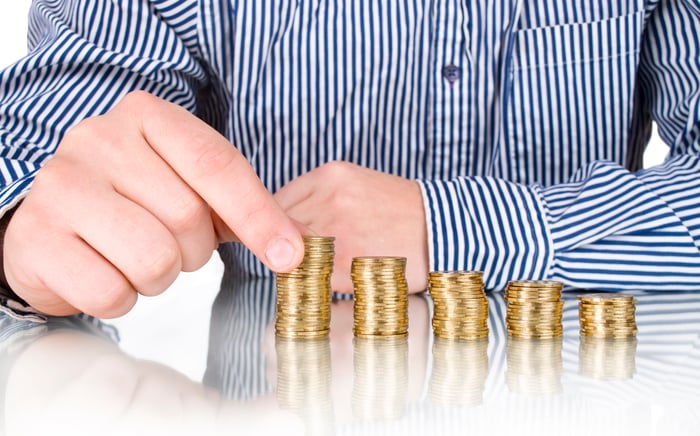 Sean Williams (Facebook): Last year -- and for practically every year following 2013 -- social media giant Facebook was virtually unstoppable. In 2017, Facebook's stock tacked on another 55%, pushing its market cap north of $500 billion at one point.

But things have been markedly different in 2018. The surfacing of the Cambridge Analytica data scandal has pushed Facebook's share price lower by nearly 9%, year-to-date, through April 23. And it probably has a lot of investors wondering whether it can regain the luster it showed in 2017. My suspicion is that it can.

Though the data scandal has been a PR nightmare for Facebook and its CEO Mark Zuckerberg, has had to testify before Congress on his company's data usage, history suggests it'll be put into the rearview mirror and forgotten in due time. As my colleague Jeremy Bowman pointed out in late March, an Aegis Capital survey of Facebook users found that few of them have paid much attention to the data privacy concerns raised by Cambridge Analytica. Further, by referencing the #DeleteUber campaign, Jeremy found little impact on the company's top-line growth.

More important, Facebook is still only touching the tip of the iceberg in terms of its potential. It's hardly begun to monetize Messenger and has done almost nothing with regard to monetizing WhatsApp. But don't mistake this lack of monetization as weakness. If Zuckerberg and team have demonstrated anything, it's that they understand how to keep users relatively happy, while also generating mad amounts of revenue from advertisers.

There's simply nowhere else advertisers can go to get instant access to more than 2 billion monthly users other than Facebook. In fact, Facebook owns four of the seven most popular social media sites in the world -- Facebook, Messenger, WhatsApp, and Instagram. This is why Wall Street is currently calling for a compound growth rate of 25% over the next four years. That's an almost unheard of growth rate for a company its size.

Now sporting a reasonably low forward P/E of 19, and a PEG ratio of nearly 0.8 -- anything below 1 is considered to be cheap -- I'd consider Facebook to be the perfect blend of value and growth for long-term investors.

Maxx Chatsko (MGP Ingredients): One of the best stocks of the last decade has delivered eye-popping total returns of 1,311% with a relatively simple business model -- and one that has mostly remained out of sight. MGP Ingredients operates as a contract distiller for premium brands large (Diageo) and small (various regional labels). In other words, it's in the business of making whiskeys, gins, and vodkas.

After shares rose 54% in 2017, there's still plenty to like about the company. I actually encouraged investors to sell the stock in late October, but it has gained 47% since then. Oops. After reading through the full-year 2017 earnings report, it's clear that the business has earned its premium valuation. Can I change my wager, Mr. Dealer?

Last year MGP Ingredients grew year-over-year revenue 9.2%, boosted its gross margin to 21.9% from 20.5%, and converted a record 12% of sales into net income. Importantly, premium beverage alcohol sales -- the highest margin product -- jumped over 18% in the year-over-year comparison. While primarily a distiller, the company has worked to diversify its business over the years by vertically integrating operations, which means it sells agricultural byproducts leftover from the upstream distilling process for both animal feed and human food ingredients.

Those provide important sources of value, but they'll be taking a backseat to premium alcohols in 2018 and 2019 when more valuable aged whiskey products will be leaving the warehouse. The expected result: MGP Ingredients thinks operating income will grow 10% to 15% in 2018, and another 15% to 20% in 2019.

Throw in projects that add value without showing up on financial statements, such as sourcing 100% renewable energy and ditching single-use plastic consumables at its operating assets, and investors can find a lot to like about this whiskey stock. It remains a buy for the foreseeable future.

The move to the cloud is paying off -- big time

Brian Feroldi (Adobe Systems): Adobe has been selling software used to create digital content for nearly four decades, so you'd be forgiven for assuming that this company has morphed into a slow-moving giant. Amazingly, that's not the case at all. Adobe posted revenue and adjusted EPS growth of 24% and 65%, respectively, last quarter. Those spectacular results weren't a one-off fluke, either; the company has been a growing like a weed ever since CEO Shantanu Narayen made the bold decision a few years back to transition to a cloud-based business model.

While the transition was met with harsh criticism when it was announced it has paid off brilliantly for long-term investors. Adobe's stock has steadily marched higher since 2013, including a 70% jump in 2017 alone. All told, shareholders have enjoyed a 417% jump in the last five years.

But can the good times continue? I believe that the answer is yes. Adobe's software lineup is led by design necessities like Photoshop, Illustrator, and InDesign, and their continued popularity drove the company's Digital Media segment to 28% growth in the first quarter. Even better, these products are typically sold through the cloud on a subscription basis, which means consistent and steady income. Adobe makes 86% of its revenue through subscriptions (a figure that's still growing), and subscription-based revenue increased 30% in the first quarter. Selling products this way also gives Adobe a better look into how its customers are using the software, which means a better experience over time. Meanwhile, the company is also plowing its R&D dollars to build out its presence in fast-growing areas such as virtual reality and digital advertising. When combined, market watchers believe that sustained double-digit revenue and profit growth is achievable. I happily concur with that assessment.

The only downside here is that the tremendous run has pushed the company's valuation up so high that shares currently trade for more than 30 times next year's earnings estimates. While that might seem like too high of a price to pay I don't think its outrageous given the company's projected profit growth rate of 26% over the next five years. Mix in a cash-heavy balance sheet and a dominant competitive position and I think that Adobe is a fantastic business that is currently trading at a fair price. If you haven't bought shares yet, consider it today.