Shareholders were pleased with better-than-anticipated growth in debit and credit payments volume.

Shares of Visa (V 0.74%) are trading higher by about 5% as of 3:50 p.m. EDT Thursday after the company reported better-than-expected earnings in the second quarter. Visa's net operating revenue grew to $5.1 billion, up 13% year over year, driven by increased payments volume across its business.

Visa is a pure-play payments network, meaning that it makes its money by taking a small slice of every transaction as a fee rather than earning revenue from lending. Thus, the number of transactions and the average fee Visa can carve out as a percentage of payments volume are its main earnings drivers. 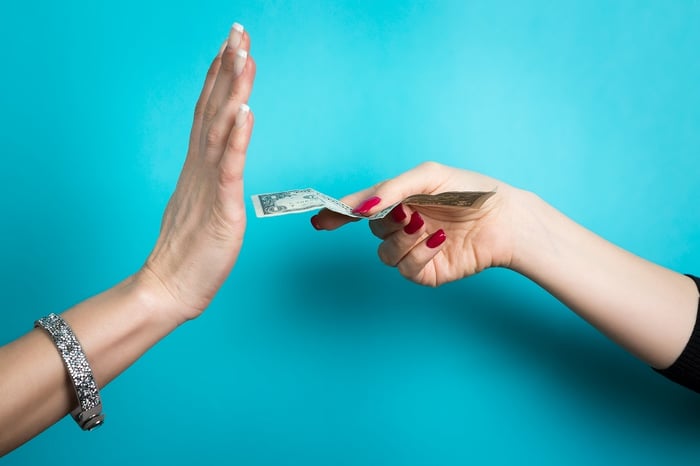 In its second quarter, the company reported that gains in both payments volume and higher-margin transactions drove an increase in revenue and profit. Total payments volume increased 10%, while higher-margin cross-border volume grew 11% after adjustments for foreign-currency fluctuations.

Debit was particularly strong for Visa, as volume grew 13% year over year (9% after currency adjustments), while credit volume grew 12% (10% after currency impacts). On the earnings conference call, Visa executives characterized debit growth as "clearly very strong," adding that it was "real apples-to-apples growth" that wasn't the result of cardholders shifting payments from credit to debit.

Visa's success is built on two tailwinds that are driving payments volume higher. In developing markets, the shift from cash to card is just getting started. In India, where the government is pushing toward a cashless economy to stamp out tax evasion, corruption, and crime, Visa's market share in debit and credit spending is more than 50%, according to conference call comments by CEO Alfred Kelly. Over time, Visa should be a natural beneficiary from government policies that favor plastic over cash.

Meanwhile, in developed market economies, where the shift to cards is in its later stages, online retail has become a real driver of payments growth. Visa previously estimated at its 2017 investor day that approximately 23% of U.S. in-person spending on personal consumption expenditures (PCE) flowed over its network. In contrast, the company believed that its share online was twice as high, or 47% of all online PCE spending.

A general shift from cash to card and from offline to online spending could power years of double-digit earnings growth for Visa and other payment networks that are happy to serve as the intermediary in trillions of dollars of global payments volume each year.