Please ensure Javascript is enabled for purposes of website accessibility
Log In Help Join The Motley Fool
Free Article Join Over 1 Million Premium Members And Get More In-Depth Stock Guidance and Research
By Jordan Wathen - Dec 28, 2017 at 7:45AM

The United States may be one of the most developed markets for plastic payments, but Visa and Mastercard benefit from trends in consumer behavior even in markets where cash transactions are dying out.

Shares of Visa (V -0.30%) and Mastercard (MA -0.79%) have soared since their IPOs, thanks to a general shift in payments from cash to cards, as well as a dominant position in the U.S. payments ecosystem. But while investors look to emerging markets as drivers of growth going forward, data from a Federal Reserve study show that these two payments businesses have massive growth potential even in their most developed markets.

Here's why Visa and Mastercard can continue to drive profit growth from U.S. consumer spending.

The changing retail landscape is a boon for payments companies like Visa and Mastercard since online shoppers are much more likely than in-store spenders to pay by card. In 2016, so-called remote transactions in which a card is not present in physical form grew faster than in-person debit and credit payments.

It's difficult to handicap who will win and lose as more goods and services are sold online, but it's clear that the payment networks are obvious winners of online retail, since cash and checks take a much smaller share of total online spending compared to spending in brick-and-mortar stores.

At its 2017 investor day, Visa pointed out that it had roughly a 23% share of in-person spending on personal consumption expenditures (PCE) in the United States. It estimated that it had 47% of U.S. PCE spending online. As retail moves online, the payment networks simply win. 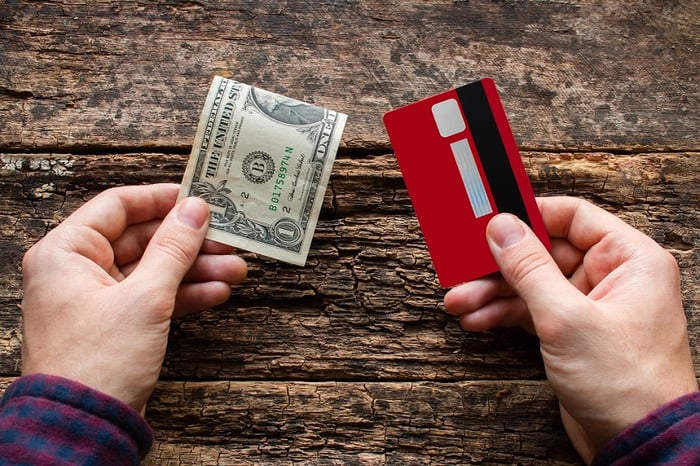 When it comes to debit or credit, Visa and Mastercard prefer that you use credit. That's because credit card fees are typically more lucrative than fees on debit cards for the payment networks and the banks that issue the cards.

Visa and Mastercard make money by providing the toll roads on which payments and data travel, so credit conditions only have an indirect impact on their top and bottom lines. That said, loosening credit conditions and a competitive credit card market are giving lift to Visa and Mastercard, given that a purchase charged is better for the networks than a purchase debited from a checking account. 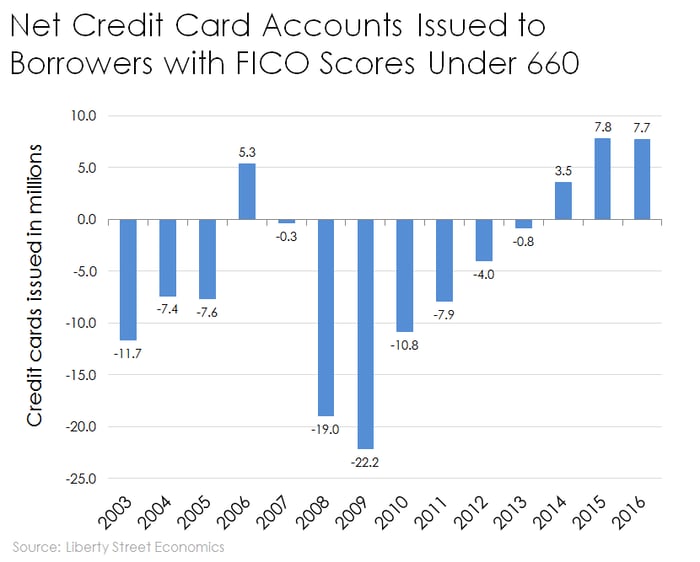 Nearly a decade after the financial crisis, banks are once again opening credit card accounts for people who have less than stellar credit. Consumers with FICO scores of 659 or lower opened roughly 7.7 million credit card accounts more than they closed in 2016, the third straight year in which new account openings topped account closures.

Private-label card companies like Synchrony Financial and Alliance Data Systems have grown by helping retailers issue their own store cards that skip Visa's and Mastercard's networks. Retailers push these private-label cards to consumers because they can avoid costly processing fees, collect more data about their customers, and share in the profits earned when their card-carrying customers carry a balance.

Despite their advantages for retailers, the number of payments conducted on private-label cards grew by 7.5% in 2016, but the total value of the payments actually declined by 1.6%. In other words, store cards are winning small transactions but losing share of larger transactions.

Visa and Mastercard have been winning over stores that might otherwise create their own private-label cards. So-called co-brand cards, which are cards that carry a brand name but can be used anywhere, are becoming more popular. Visa won big with several retail card programs, including Costco's Anywhere Visa and Amazon's Prime Rewards Visa card, which is a compelling alternative to Amazon's store card issued by Synchrony Financial.

Cards accounted for roughly $6 trillion of total payment volume in the United States in 2016, putting the U.S. far ahead of most of the world when it comes to the shift from cash to plastic. But there's more to these growth stories than the shift to plastic. Visa and Mastercard can still find profit growth even at home, thanks to a shift toward e-commerce, growing credit card share, and wins in co-brand cards.