Please ensure Javascript is enabled for purposes of website accessibility
Log In Help Join The Motley Fool
Free Article Join Over 1 Million Premium Members And Get More In-Depth Stock Guidance and Research
By Lee Samaha – Updated Apr 27, 2018 at 9:18AM

Engineering-design software company Dassault Systemes (DASTY 3.07%) reported a solid set of first-quarter results and good progress on its strategic objectives. The company's core customers are in areas like industrial equipment, transportation, and aerospace -- Boeing is a notable client -- and these end markets are all doing well right now. It's a favorable environment, so let's take a closer look at how Dassault Systemes performed in the quarter and what investors can expect for the rest of the year. 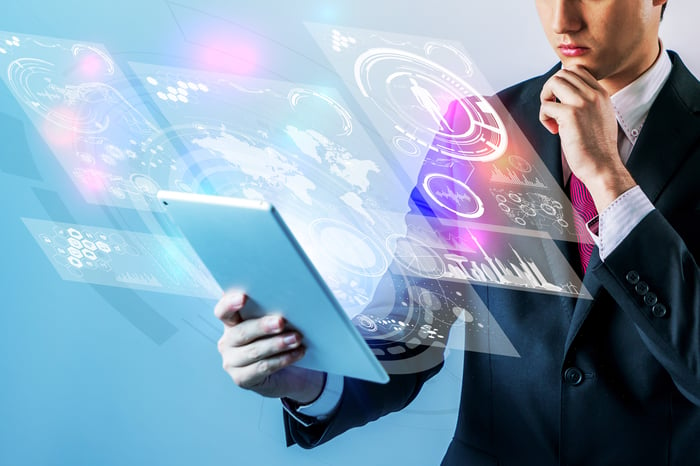 For the sake of clarity, I'm using the non-IFRS, IAS 18 numbers throughout, because this is what management is currently giving guidance to. (You can think of the non-IFRS numbers in the same way that U.S. companies report non-GAAP earnings.) Also, note that Dassault generates around 60% of its revenue from outside Europe, so currency movements can bounce its earnings around a lot.

In a nutshell, revenue and margin came in at the high end of the underlying guidance range, and earnings were ahead of management's guidance -- a good result.

It's somewhat surprising that full-year guidance wasn't raised, given the strong first-quarter earnings. Moreover, the guidance for the second quarter actually implies a revenue growth rate that is higher than the full-year guidance. Second-quarter revenue is expected to increase 8% to 10% on a constant currency basis, compared to the 8% to 9% full-year forecast. EPS in the second quarter is expected to be 0.65 euros to 0.68 euros, an increase of 16% to 22% in constant currency.

However you look at it, Dassault is growing at a good clip, and management's full-year guidance may prove to be conservative.

As ever with Dassault, the key to its growth prospects lies in its license sales. Although license sales made up only 26.3% of 2017 revenue, they tend to lead to growth in subscription and support revenue (62.5%). As such, license software growth of 14% in the quarter was a good result, and management maintained its full-year guidance for license revenue to grow 8% to 10% on a constant currency basis. 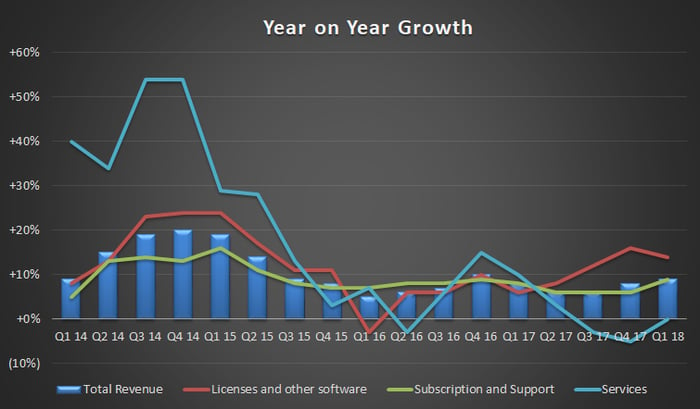 Growth was good across Dassault's industry verticals in the quarter. For example, management cited double-digit constant currency growth in software revenue in core industries such as transportation and mobility, industrial equipment, and aerospace and defense. Meanwhile, non-core industries -- such as natural resources, and architecture, engineering and construction -- also reported double-digit software growth. In addition, software revenue grew strongly across all three major regions, with Europe up 6%, the Americas up 11%, and Asia up 16%.

Dassault sees its 3DExperience platform as a driver of long-term growth, and management lauded the 53% constant currency increase in 3DExperience license revenue in the quarter.  (This platform allows users of Dassault's design software to collaborate with other company functions (marketing, sales, research and development, support, etc.) in order to create and support products.)

Where next for Dassault Systemes?

All told, it was a positive report, and the company is executing on its strategic aims. Dassault has benefited from an improvement in its industrial end markets, and its customers are spending accordingly. Looking ahead, investors will be watching to see if software license sales grow as expected, driven by 3DExperience adoption.