Please ensure Javascript is enabled for purposes of website accessibility
Log In Help Join The Motley Fool
Free Article Join Over 1 Million Premium Members And Get More In-Depth Stock Guidance and Research
By Ashraf Eassa – Apr 27, 2018 at 11:00AM

A look at the financial results.

Intel's nonvolatile memory business is relatively small today, making up roughly 6% of the company's overall revenue in 2017. However, this business is one that Intel expects to be a key growth engine for years to come. 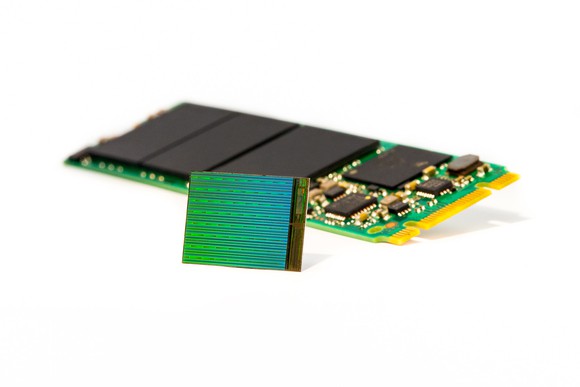 To better understand this business, let's dive into how it performed last year.

The revenue growth during 2017, Intel says, was fueled by strong growth in shipments of data center-oriented solid state drives, partially offset by lower average selling prices as a result of "market conditions and the ramp of [Intel's] new TLC 3D NAND product line, which has a lower cost, and [average selling price] compared to [Intel's] primary multi-level cell 3D NAND."

Data centers are increasingly moving toward NAND flash-based solid state drives for their storage needs thanks to the lower power consumption and much higher performance of such drives compared to traditional hard disk drives.

Another loss, but profits coming soon

Intel reported that its nonvolatile memory solutions group suffered an operating loss of $284 million. Though this wasn't a great result (losing money is generally a bad thing), it was narrower than the $544 million loss that the business unit saw in the prior year.

Intel attributes the improvement in the operating loss to "unit cost reductions" stemming from "cost improvements" related to its 3D NAND factory in Dalian, China as well as "lower costs from the ramp of the Intel 3D NAND product line compared to prior generation NAND products."

Partially offsetting the good news to the tune of $380 million was lower gross profit margins on the revenue that this business generated.

Although this business lost money in 2017, Intel says that it expects that its nonvolatile memory solutions group will be profitable for the full year of 2018 (don't be surprised to see losses in some quarters and profit in others, though).

Ultimately, the market for NAND flash-based solid state drives is governed by both secular industry trends (e.g. shift from hard disk drives to solid state storage as well as demand growth for storage products) as well as by the supply of NAND flash available from the industry players as a whole.

I think the secular trends look strong now and should remain strong for the foreseeable future -- NAND flash-based storage is faster and more efficient than traditional hard disk drives, so I expect the shift toward NAND to continue.

Intel's execution here seems to be good and improving, so I'm not too worried about Intel not having compelling products to offer in its target markets.

The key thing to watch will be what overall industry NAND flash supply growth looks like. If the industry, as a whole, goes nuts in trying to build out capacity to support the expected demand growth and significantly overshoots demand, this could put substantial pressure on pricing and ultimately tank profits industrywide -- including at Intel.

But, for now, it looks like Intel's nonvolatile memory business is on the right track.