Please ensure Javascript is enabled for purposes of website accessibility
Log In Help Join The Motley Fool
Free Article Join Over 1 Million Premium Members And Get More In-Depth Stock Guidance and Research
By Dan Caplinger – Apr 27, 2018 at 8:23AM

Find out which key asset sales will transform the conglomerate's business.

Conglomerates are often under pressure to do something with various components of their businesses, and Leucadia National (JEF 1.38%) has felt pressure to do something with its widely varied assortment of business units. With key pieces of Leucadia including meat specialist National Beef and financial services giant Jefferies Group, the overall company can be hard to evaluate. That's a big reason why Leucadia said earlier this month that it would make big strategic moves to refocus its efforts more squarely on financial services.

Coming into Thursday's first-quarter financial report, Leucadia investors already had a good idea of what the company would say about its backward-looking results, because it pre-announced earnings and other key metrics in early April. More interesting was the quick timeline that the company sees in completing its strategic shift, along with how it sees the business going forward from there once it renames itself after its Jefferies unit. 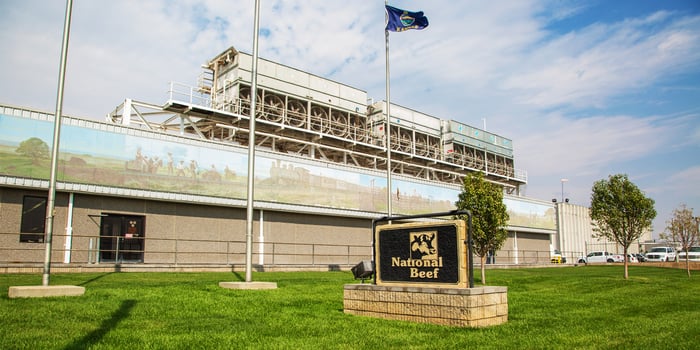 One last report for Leucadia

Leucadia's first-quarter report was consistent with what the company had told everyone in early April to expect. Revenue was down by 7% to $2.68 billion, while net income attributable to Leucadia shareholders came in at $125 million. That worked out to $0.34 per share, which was substantially lower than year-ago earnings of $0.75 per share.

The rest of Leucadia's operations, however, held the overall company back. The other financial services area saw net losses once again, although they were smaller than they'd been in the year-earlier period. Mark-to-market losses in the HRG Group business hurt Leucadia's other merchant banking segment, where sales plunged almost 80% and the unit swung to a net loss compared to impressive profits in the first quarter of 2017.

Looking more closely at Jefferies, Leucadia cited a number of encouraging developments. Strong performance in investment banking, equities, and fixed income all helped to boost revenue, with investment banking in particular showing that the division is getting its share of newly issued debt and equity offerings as well as benefiting from merger and acquisition activity. Strong loan originations and asset-sale gains helped boost contributions from the company's Berkadia and HomeFed positions.

With National Beef, Leucadia was pleased to see considerable income despite what's usually an off-season for beef processing. Most of the rest of its merchant banking businesses also fared well, with the exception of HRG's weakness.

What's next for Leucadia?

Leucadia CEO Rich Handler and President Brian Friedman focused largely on the future: "Our recently announced strategic transactions, including the agreed-upon sale of 48% of National Beef, the agreed-upon sale of 100% of our equity interest in Garcadia, and the acquisition by Vitesse Energy Finance of $190 million of additional Bakken oil and gas assets, will complete an ongoing transformation of Leucadia to a diversified financial services company." The executives said that they expect the transactions all to close within the next four months.

After the sale, Leucadia will change its name to Jefferies Financial Group, pending shareholder approval. The company will still have a 31% equity interest in National Beef, which it will retain within its merchant banking portfolio, and rising demand and positive supply levels for cattle should help the unit continue to generate impressive returns on equity. The new structure should be better received by investors, with Handler and Friedman noting that the move will eliminate what had been a "highly diversified but relatively random group of assets" and organize them into a well-coordinated operation.

Shareholders didn't have a particularly strong immediate reaction to the news, and the stock was unchanged in pre-market trading Friday following the Thursday night announcement. As the Leucadia name disappears, investors should keep their eyes on the new Jefferies to see whether its transformation yields the results that the company hopes to achieve.