After improving for six straight quarters, National Oilwell Varco's (NYSE:NOV) results took a step back to start 2018 as revenue declined 9% from the fourth quarter to $1.8 billion, though it was 3% higher than the year-ago period. The company's net loss of $68 million ($0.18 per share), on the other hand, improved sequentially while declining year over year. However, it still came in well below expectations due to several headwinds during the quarter, which the company believes will start abating soon.

Drilling down into the first quarter

On the one hand, National Oilwell Varco benefited from the continued improvement in the oil market thanks to higher prices. Drilling activities in North American shale fields remain strong thanks to excellent economics at current oil prices, which drove demand for the company's products and services. "Unfortunately, however, the protracted budgeting cycle we saw early in the year led to a slower-than-anticipated start in our capital equipment businesses, and softness in our Eastern Hemisphere operations," according to CEO Clay Williams. He further noted that "this more than offset improvements in North America, snapping our six-quarter streak of steadily improving results."

That tepid start to the year didn't spare any of the company's three operating segments: 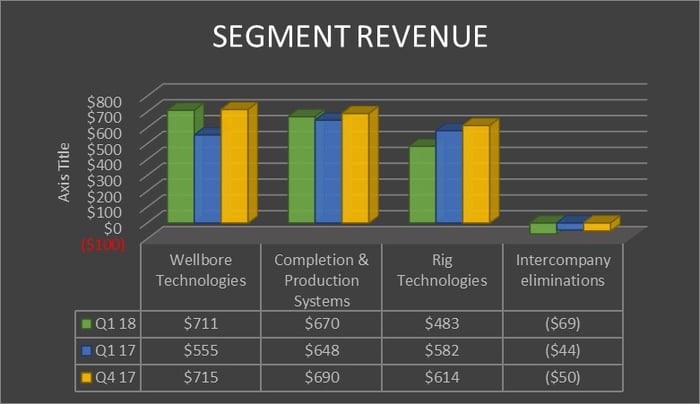 Data source: National Oilwell Varco. Chart by the author. In millions of dollars.

Hardest hit was rig technologies, where revenue plunged 21% versus the fourth quarter and was 17% lower year over year. The main issue continues to be the sluggishness in the offshore drilling sector, resulting in reduced progress on new rig construction. The company did book $211 million of new orders during the quarter, versus $153 million shipped out from the backlog, though these were for two land rigs destined for the Middle East and several land rig equipment upgrades, not for the more lucrative offshore drilling rigs.

Sales in the completion and production systems business slipped 3% sequentially, though they were up 3% versus last year's first quarter. Driving the decline from last quarter was deferred deliveries and order commitments due to the slow budget cycle.

Finally, revenue from wellbore technologies only dipped 1% from the fourth quarter and was up 28% year over year. Driving the sequential decline was the slow start to the year in the Eastern Hemisphere and a fall-off in drill pipe sales. 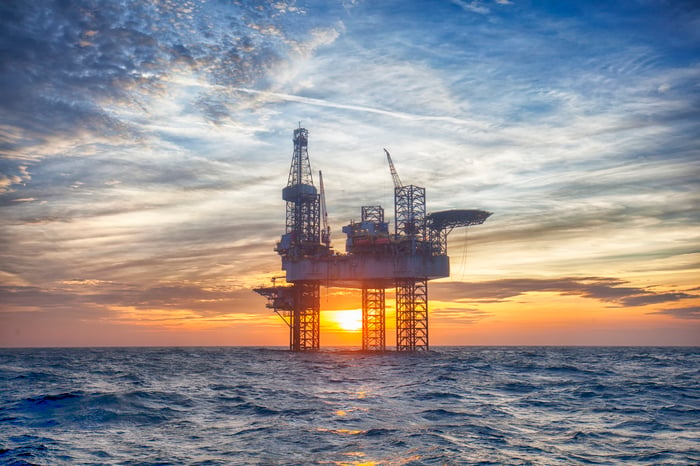 While the first quarter came in weaker than the company anticipated, Williams stated that "we expect to be back on track soon." He pointed out that "most of the capital equipment deliveries that were deferred by customers at the end of the quarter were accepted early in the second quarter," which gives "us confidence that the general upward trajectory of business will resume in the second quarter."

The CEO also stated three things that bode well for the company's future beyond the current quarter. First, he reported that "scarcity is returning to many corners of the oilfield," suggesting that customers will be willing to pay more for its products to ensure they can get what they need, which would boost margins. Second, he noted that "we've seen good uptake on technologies we've been introducing through the downturn," which means the company developed the right products to serve the growing needs of its customers. Finally, he said that those two demand drivers are happening "all while the oil supply and demand picture continues to tighten," which points to higher oil prices and more cash flowing to its customers that they can spend on upgrading their equipment. This combination of factors indicates that National Oilwell Varco could see a significant acceleration in its business over the next year.

Just a bump in the road to recovery

While National Oilwell Varco's results took a step back during the first quarter, that was due more to some timing issues than renewed trouble in the oil sector. Instead, the outlook for the oil patch seems to be growing brighter by the day as crude continues rising, which should incentivize producers to spend more money on equipment. As the largest provider of oilfield equipment, National Oilwell Varco stands to benefit from this trend, which is the catalyst that could finally get the company's stock out of its current doldrums.