Exchange-traded funds (ETFs) have been around long enough that many investors simply take for granted that they've always been there. Yet it wasn't that long ago that ETFs didn't even exist.

Twenty-five years ago, the SPDR S&P 500 ETF (NYSEMKT:SPY) came onto the market, and few investors could have realized that the fund would eventually grow into the $250-billion colossus that it is today. Now, millions of investors rely on the SPDR S&P 500 ETF to get simple exposure to one of the most closely followed stock market indexes in the world.

Before the SPDR was created, investors who were interested in index investing had choices, but they were restricted to the traditional mutual fund arena. Giants like the Vanguard 500 Index Fund (NASDAQMUTFUND:VFINX) had attracted huge amounts of assets simply by promising to track the returns of the S&P 500 index, less the minimal costs of running the fund.

Yet mutual funds had one drawback that many frequent traders didn't like: You could only buy and sell shares once per day, at the market close. That wasn't a comfortable limitation for those who wanted to be able to get into or out of positions at times during the day if news events suddenly moved markets. Moreover, some mutual fund companies put restrictions on investors' ability to do frequent trades, further limiting their utility for those who like to play short-term movements in the market. 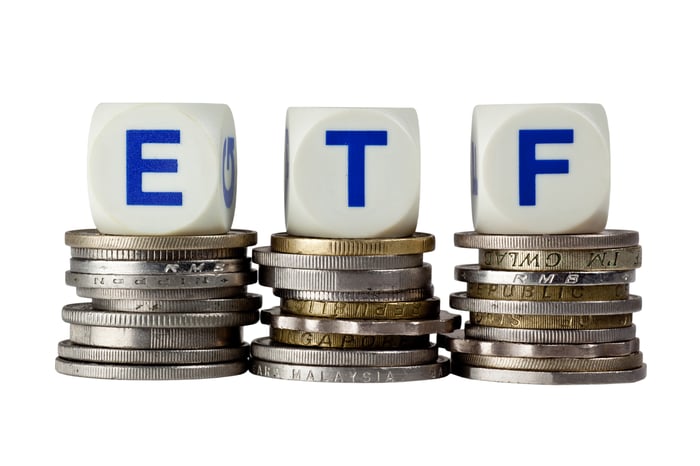 Exchange-traded funds promised to change that. ETFs were set up to look a lot like index mutual funds, tracking a certain benchmark by simply buying all of the constituent stocks in the index. They had many of the same favorable characteristics of mutual funds, including the ability to get diversified exposure with only minimal amounts of investment capital.

Where they differed, though, was in how investors could trade them. Because ETFs were listed directly on stock exchanges rather than through mutual fund companies, investors could buy or sell ETF shares whenever the market was open. This appealed to institutional investors and others who needed quick liquidity in the event of market volatility.

The S&P 500 index was a natural choice for the first major ETF to track. Just as Vanguard's index fund experience had shown, investors were interested in tracking the returns of the S&P 500, as many actively managed mutual funds already used that index as a measure of their relative success. By the late 1990s, the fund had attracted more than $10 billion in assets. It took another market cycle for the SPDR to hit $100 billion toward the end of 2007, but over the past decade, investors have flocked to the ETF, which hit $200 billion in late 2014 and briefly hit $300 billion earlier this year before the latest market volatility hit. 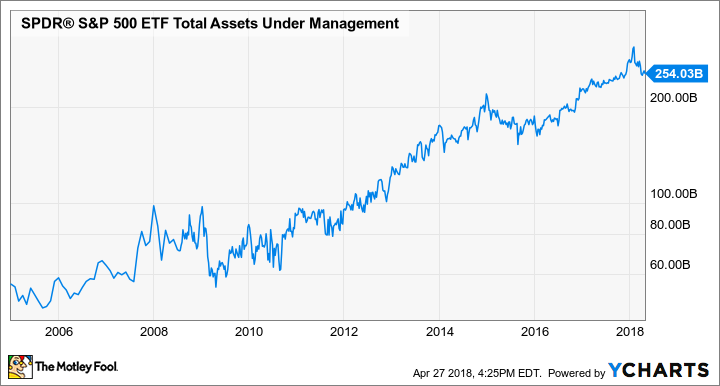 There's no end in sight to the success of the SPDR ETF. The fund remains not only the most frequently traded ETF in the market on a daily basis but also ranks among the most active issues across the entire universe of stocks and funds. The SPDR dominates the rest of the ETF market, with volume that dwarfs even its most popular peers. You'd have to add together nearly 20 of the next most popular funds to equal the dollar trading volume that SPDR S&P 500 produces on a typical day.

As you can see above, when stock markets weaken, so, too, do assets under management for the SPDR S&P 500 ETF, and that could pose momentary difficulties for the fund in the next bear market. Yet on the whole, investors have embraced the ETF concept, and the SPDR S&P 500 looks poised to keep its stranglehold on the rest of the industry as the leading fund for years to come.

Regardless of whether you trade frequently or hold for the long run, the SPDR S&P 500 ETF can make a solid choice for the stock exposure in a wide range of investment portfolios.