Biogen's stock has had an awful 2018 so far. Is this top biotech now an incredible bargain?

Biotech heavyweight Biogen (BIIB 1.03%) has now lost over 13% of its value so far this year. To be fair, this year hasn't been kind to biotechs in general, thanks to President Trump's aggressive trade policies with China. But Biogen's value has been declining at a far faster rate than the industry as a whole due to stiffer competition in the all-important multiple sclerosis (MS) space.

For instance, the company saw its total MS sales fall from $2.3 billion to $2.1 billion in the first quarter of 2018 compared to the fourth quarter of 2017. That's a worrying sign that things are indeed moving in the wrong direction. 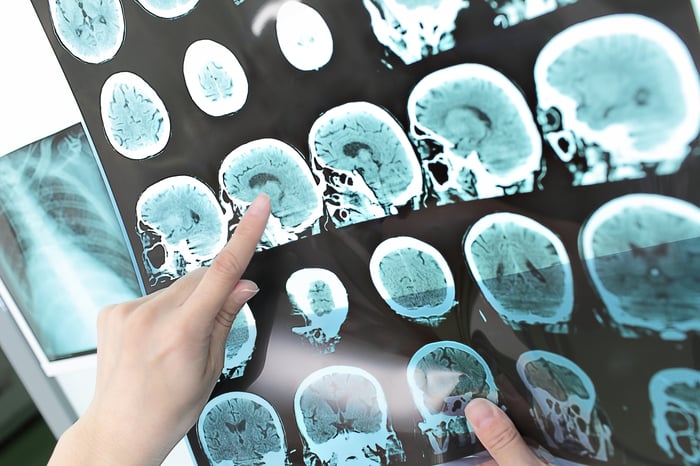 Management, however, thinks that better days are close at hand. Should investors take advantage of this double-digit dip and put their faith in management to right the ship? Let's dig deeper to find out.

Evaporating growth and a risky pipeline

And if this sideways trajectory for Spinraza doesn't change immediately, Biogen's top-line will sink into negative territory, perhaps starting as early as the second quarter of this year. The biotech's MS franchise, after all, is sputtering, and its biosimilar franchise simply doesn't have enough momentum to drive growth in the near term.

Compounding matters, Biogen's clinical pipeline has been a glaring problem for quite awhile now. In short, the company is largely banking on an unprecedented readout for its Alzheimer's disease (AD) drug candidate, aducanumab, to usher in its next era of growth.

That's a rather bold position, as the failure rates among experimental AD medications have been so high that Pfizer (PFE -0.91%) exited the space completely, and other, smaller companies are currently having problems finding capital to even fund their clinical activities.

To address this issue, Biogen did in-license Pfizer's schizophrenia drug candidate BIIB104 (formerly known as PF-04958242) last month, and the biotech also inked a $1 billion development deal with Ionis for a host neuro drug candidates. But these deals may not be enough to move the needle anytime soon.

If a falling top line weren't enough, Biogen is also facing the possibility of Spinraza becoming obsolete within a few short years into its commercialization. Novartis (NVS -0.73%), after all, plopped down a whopping $8.7 billion for the gene therapy company AveXis, which developing a curative treatment for SMA right now.

The twist to this story is that many industry insiders expected Biogen to court and eventually acquire AveXis to negate this clear and present danger to its most important growth product. However, Biogen, as always, decided to forgo a large acquisition in favor of these smaller licensing deals. This blatant aversion to big acquisitions is now set to weigh heavily on the biotech's share price moving forward.

As things stand now, for instance, Biogen doesn't have a high-value drug candidate capable of offsetting its declining MS revenue and blunting the impact of Novartis' potentially game-changing gene therapy for SMA. This recent $1 billion deal with Ionis is certainly noteworthy, but this collaboration won't produce a commercial product fast enough to solve these near-term headwinds.

So, unless Biogen finally decides to buy a revenue-generating peer soon -- or at least one with a compelling late-stage asset -- this large-cap biotech is arguably best avoided by investors.