Strength in its existing CNC metal-machining business and an acquisition drove first-quarter revenue growth of 34%.

Management attributed the growth to generally robust business performance combined with a boost from the recent changes in the U.S. tax law and the contribution from RAPID Manufacturing, the New Hampshire-based metalworking company Proto Labs acquired on Dec. 1.

The market liked the results, sending shares of Proto Labs to a closing gain of 4.3% on Thursday.

Excluding the $2.7 million favorable impact of foreign currency and the contribution from RAPID, revenue grew somewhat less than 17% year over year. Management said RAPID generated revenue of about $11 million in the first quarter of 2017, but wasn't able to break out its sales in the reported quarter because there's been an intermingling of RAPID's CNC (computer numerical control) metal-machining operation with Proto Labs' existing CNC business.

Proto Labs had forecast adjusted earnings per share (EPS) in the range of $0.64 to $0.70 on revenue of $101 million to $106 million, so it beat the upper end of both of its guidance ranges. For additional context -- though long-term investors shouldn't give too much importance to Wall Street's near-term estimates -- analysts were looking for adjusted EPS of $0.68 on revenue of $103.9 million. So the company breezed by both expectations. 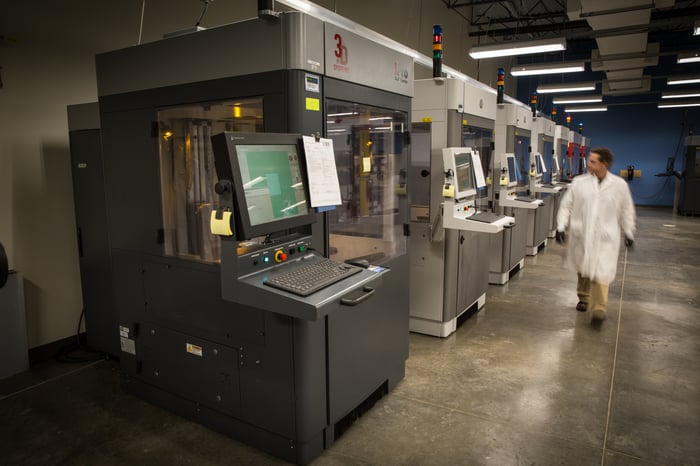 Proto Labs's CNC business continues to drive growth, as it did in all four quarters last year. While this business benefited from the acquisition of RAPID in the previous quarter, the company's existing CNC business also performed well. Injection molding is performing better than suggested by the metric above. This business had a particularly tough year-ago comparable due to a couple large orders in Europe and the shipping of the final products from its now discontinued magnesium injection molding operation.

3D printing's growth was led by the U.S., but Europe's revenue also increased in the double digits -- a quite positive development because the European 3D printing business has struggled to grow revenue since Proto Labs entered this market in late 2015 via an acquisition. The European 3D printing business, however, continues to be less profitable than its U.S. counterpart, presenting a tailwind to the overall gross margin. This business had a gross margin of just 10% in the quarter, CFO John Way said on the earnings call. In an effort to increase the market's profitability, Proto Labs sold its Finland 3D printing facility in early April. The company will still service the Nordic market, but will do so out of its Germany facility.

Sheet metal is a new category as of the previous quarter, thanks to the RAPID acquisition.

We are excited to start 2018 with the largest quarter in Proto Labs' history, with quarterly revenue topping the $100 million mark for the first time at $107.7 million. This quarter is the first full quarter including the results of the Rapid Manufacturing acquisition, which added sheet metal to our product portfolio and expanded our CNC machining capabilities. The continued expansion of our services increases our value to our customers and allows us to serve more product developers and engineers each quarter.

Way outlined the company's second-quarter 2018 outlook on the conference call. He also said that given the strong first quarter and start to the second quarter, the company now expects full-year 2018 results to come in at the high end of the guidance ranges it issued last quarter.