Please ensure Javascript is enabled for purposes of website accessibility
Log In Help Join The Motley Fool
Free Article Join Over 1 Million Premium Members And Get More In-Depth Stock Guidance and Research
By Jason Hall – Apr 28, 2018 at 7:17AM

The past few years have seen fortunes created -- and lost -- with cryptocurrencies. Here's why I'm avoiding the space -- at least for the moment.

Cryptocurrencies have been all the rage for the past year or so, creating substantial wealth for investors who bought these virtual coins anytime before the beginning of 2017. Some of the most popular, like Litecoin, Bitcoin, Ethereum, Stellar, and Ripple, have generated enormous returns for anyone who bought, mined, or otherwise acquired these digital currencies soon after they came into existence. We are talking about gains of between 4,000% and 17,000,000% -- potentially life-changing wealth.

Yet as of this writing, almost all of the most well-known cryptocurrencies have lost more than half of their value from their peaks in late 2017 and early 2018. So while some people see now as an excellent time to invest in cryptocurrencies while they're down, I think today could be one of the riskiest times to buy, and most people should avoid cryptocurrencies as an asset class. 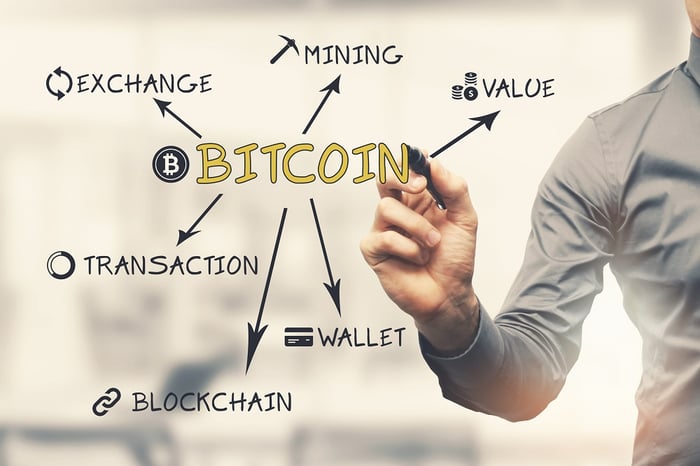 I'm not saying I'll never own cryptocurrencies. To the contrary -- I expect I will, and maybe sooner rather than later. But for the moment, there are things holding me back.

The biggest problems with cryptocurrencies

Before any cryptocurrency has a shot at being a "real" currency, it needs to meet three important criteria:

As things stand today, no cryptocurrency can really claim any of these things. They are not easy to spend for mundane, everyday items. And when it comes to security, there have been multiple instances of hackers stealing hundreds of millions of dollars in cryptocurrencies. And there's no FDIC insurance to protect you from cryptocurrency stolen from a digital wallet or exchange like there is on the money in your bank account.

Finally, money should have steady, predictable value. Here's how much value the major cryptocurrencies have lost in the past six months: 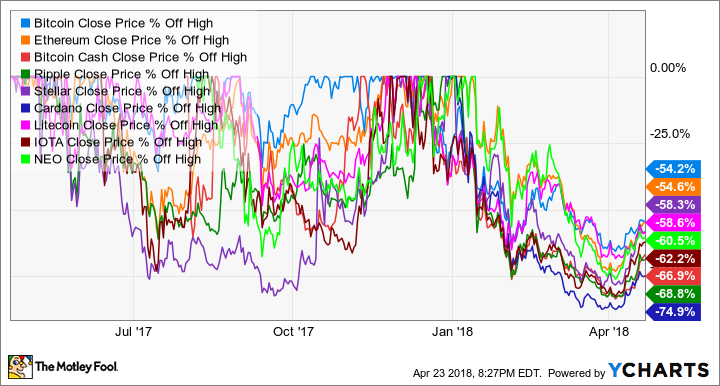 For a currency, that's hyper-inflation. You'd be paying at least twice as much or more to buy anything with your cryptocurrencies today than a few months ago.

Add these three things up, and cryptocurrencies are actually terrible currencies. People want to be able to easily spend money, know what that money is worth from day to day, and have assurances that it is secure and safe. Few cryptocurrencies can check any of those boxes for the average person.

This is a substantial weakness in their long-term value.

Why that makes them poor investments

The problems I raise above aren't unique to other so-called stores of value, such as precious metals like gold and silver. And it certainly hasn't kept investors from pouring billions of dollars into cryptocurrencies in recent years. However, silver and gold have built-in demand because of their commercial and industrial uses, and this creates underlying value that helps support market prices. Similarly, shares in a public company are underpinned by the financial value of the assets the company owns.

Cryptocurrencies -- at least at this stage -- are almost entirely valued based on market speculation of what they could be worth, with little utility value underpinning their worth. This is easily the biggest reason why their prices are so volatile. For instance, despite having lost half or more of their value since late 2017, many cryptocurrencies have surged again over the past month: 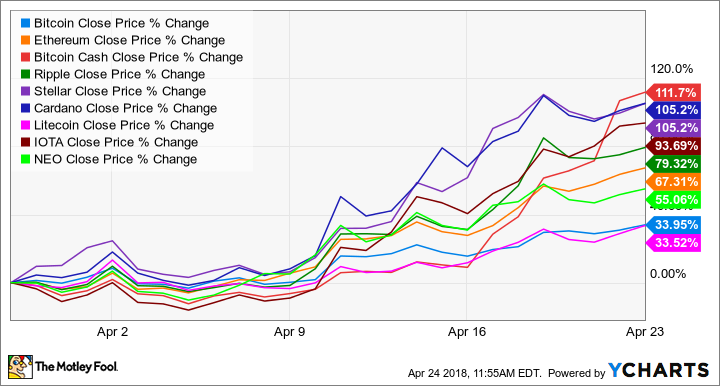 But these gains aren't based on increased value or becoming more usable; it's mainly a product of more speculators jumping into the cryptocurrency pool.

Here's why I'm open to changing my mind

While I may not be ready to invest in cryptocurrencies today, there is remarkable potential in the underlying technology with which they work: Blockchain. Without getting too deep in the weeds of the technology, blockchain has far more capability than just being used as a digital currency. As cryptocurrency expert and co-founder of crypto start-up TenX Dr. Julian Hosp told The Motley Fool's Rex Moore, cryptocurrencies themselves are:

[T]he least exciting topic of all of them. Yes it's financials, and yes there is money to be made, but just from an executional standpoint...it's not that we don't have digital currencies. I mean, PayPal is digital, right? Yes, one is decentralized and one is centralized, but it's not the most exciting kind of thing.

Hosp went on to speak about the numerous potential applications for blockchain in insurance, medical records, and other huge industries. But we are still in the infancy of learning how blockchain and cryptocurrencies can be leveraged to add value, improve, and even disrupt these industries. But as this potential starts to become more realized, and the path forward for different coins and companies behind them will become more apparent, I'll reconsider my stance.

Huge possibilities, but it will be hard to pick the winners

Maybe the biggest reason why I haven't invested in cryptocurrencies -- and why I'm staying on the sidelines for now -- is the sheer number of coins out there, which makes it very hard to know which will emerge as the big winners and which will lose relevance and value. With dozens of coins out there and more popping up all the time, it's easy to fall into a trap of trying to find the "next" bitcoin, without really knowing what you're buying.

In the speech Dr. Hosp gave before being interviewed by Rex, he said cryptocurrencies and blockchain are "the equivalent of the internet in 1994, before the internet exploded in 1996." Very few of the internet stocks from 1994 (and even 1996) were successful, and a lot of investors suffered huge losses by making the wrong bets on the wrong companies.

And I expect the exact same thing will happen to cryptocurrency investors. A few people will make vast fortunes, and some others will profit. However, a substantial number of people will lose money by chasing the "next great thing" in crypto. Eventually I will buy cryptocurrencies. But until it becomes more clear which ones will create sustained value above and beyond what speculators think they are worth, I'm in no rush to buy.