These three stocks offer a better risk-reward than your average penny stock.

It's easy to see why novice investors get wrapped up in penny stocks. We tend to hear a lot about the amazing turnaround stories like General Growth Properties and Pier 1 Imports. And the ultra-rare companies that go from penny stock to billion-dollar buyout, such as Kuerig maker Green Mountain Coffee Roasters, stand as evidence that at least some penny stocks do actually survive and thrive.

But for every company that goes from $0.10 per share to $10, there are perhaps thousands of other penny stocks that go to zero -- companies you'll never hear about because failure is the normal outcome for the vast majority of penny stock issuers.

Rather than try to pick the rare winners from a sea of losers, investors would be better off investing in companies that have already proven their mettle as businesses worth owning for the long haul. In the article below, three Motley Fool investors lay the case for investing in Visa (V -0.03%), Berkshire Hathaway (BRK.A -1.47%) (BRK.B -1.48%), and Synchrony Financial (SYF -1.28%) as stocks worth buying, even if their shares cost more than pocket change.

Sean Williams (Visa): Though penny stocks might appear alluring at times, I believe your money would be better spent buying into a time-tested megacap like Visa. Despite having virtually no downtrends since 2010, Visa remains a top-tier financial services company thanks to a host of competitive advantages.

To begin with, it's a monster in the United States. WalletHub data from 2016 showed that Visa controlled close to 51% of all network purchasing volume in the U.S., which was almost 28 percentage points higher than American Express, the next-closest competitor. It also had 328 million credit cards in circulation in 2016, which was more than MasterCard, American Express, and Discover Financial Services combined!

To boot, the barrier to entry in the payment processing industry is exceptionally high. Not only does it take a small fortune to set up the infrastructure to process payments, but it also takes a long time for payment facilitators like Visa to build rapport with merchants and consumers. These intangibles are tough to quantify, but it makes Visa a name that's very difficult to supplant.

Looking abroad, Visa expanded its geographic reach in June 2016 when it acquired Visa Europe. This deal was an immediate boost to its merchant network, and adds to its global plans to move beyond the U.S. borders in order to drive purchase volume growth. Years ago, MasterCard CFO Martina Hund-Mejean noted that 85% of global transactions are still conducted in cash, leaving Visa and its peers with a massive moat to grow in places like Africa, Southeast Asia, and the Middle East.

But my favorite thing about Visa is that it's relatively unaffected by economic swings. Though the company does rely on purchasing to drive the processing fees it collects, it's not a lender, which means it doesn't have to worry about credit delinquencies.

With geographic diversification and a currently low-yielding, but nonetheless quick growing, dividend, Visa looks to be a much smarter investment idea than a penny stock. 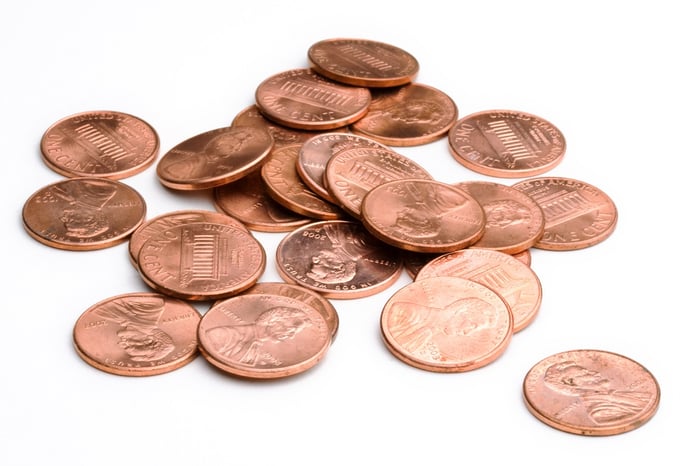 Dan Caplinger (Berkshire Hathaway): If there's one stock that's just about the complete opposite of a penny stock, it's Warren Buffett's Berkshire Hathaway. The company's Class A shares are the most expensive investment in the stock market, currently fetching in the neighborhood of $300,000 for a single share.

Berkshire Hathaway doesn't pretend to offer the outsized get-rich-quick gains that penny stock promoters typically tout, but those who've held onto shares for the long haul have been richly rewarded. Berkshire's own core insurance business has generated strong, reliable profits over the years thanks in large part to the company's underwriting prowess and financial strength, while the conglomerate also has an impressive lineup of wholly owned subsidiaries and substantial positions in publicly traded stocks in its portfolio.

Investors of more modest means can use Class B shares to buy Berkshire. At around $200 per share, penny stock investors might initially balk at the idea of betting their money on Warren Buffett. Yet with a long history of success and dozens of profitable businesses under its corporate umbrella, Berkshire Hathaway is the perfect answer for those who are smart enough to avoid penny stocks.

A bank with a niche

Jordan Wathen (Synchrony Financial): I'm a big believer in the idea that one way individual investors can have an edge is through "time arbitrage," or being able to take the long view with a stock when every professional investor is worried about the next twelve months.

Synchrony Financial makes its money by being a financial partner to retailers who are eager to put store-branded credit cards in the hands of their customers. Retailers like store cards because they help them collect valuable data about their customers, avoid costly credit card processing fees, and generate incremental income from interest charges when customers carry a balance. But few retailers have the balance sheet capacity or the skill set necessary to manage a credit card portfolio. That's where Synchrony Financial steps in as an "outsourced" solution for retailers who want to give their loyal customers a credit line.

Synchrony Financial is unlikely to have a blowout year in 2018. That's because later this year it will close on a deal to acquire a $6.8 billion credit card portfolio from PayPal, requiring it to set aside more money as a placeholder for expected losses, weighing on its reported earnings. I consider this short-term pain for long-term gain, as Synchrony will have to take charges for more than a year of loan losses in a timeframe that spans roughly six months.

At about ten times the consensus earnings estimate in 2018, I think long-term investors could be handsomely rewarded by placing a bet on this private-label card issuer. By 2019, its true earnings power should be evident as its provisions for loan losses fall off, at which point I believe the market will be willing to pay a higher multiple of higher earnings to get in -- a win-win for investors who score their investment performance over years rather than months.