Please ensure Javascript is enabled for purposes of website accessibility
Log In Help Join The Motley Fool
Free Article Join Over 1 Million Premium Members And Get More In-Depth Stock Guidance and Research
By Ashraf Eassa – Apr 30, 2018 at 7:23AM

When the pie stops growing, try to take a bigger piece of the pie.

MacRumors recently observed  that Apple (AAPL -1.33%) has started running advertisements in which it seems to aggressively court current Android smartphone users to buy an Apple iPhone. 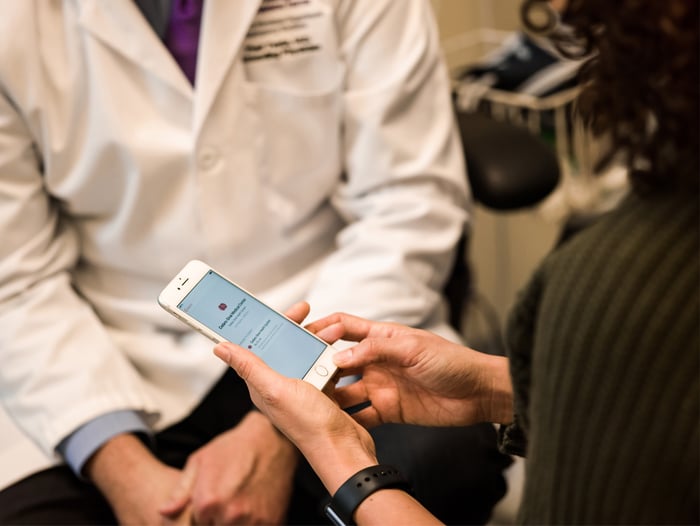 Note that while Apple doesn't explicitly call out Google/Android in these videos, Google's Android is the only other real alternative to Apple's iOS in the smartphone market.

The ads, in my view, are well done -- they're short, clever, and communicate the points that Apple is trying to make effectively. A question that investors might want to ask, though, is why Apple feels the need to explicitly compare the quality of its products/ecosystem with Android-based smartphones in video advertisements.

Well, here's what I think.

As the overall smartphone market matures (market research company IDC claims  that worldwide smartphone shipments slipped 6.3% in the fourth quarter of 2017), companies that depend heavily on the smartphone market will naturally turn to other means of growing their smartphone-related revenue.

One thing that smartphone makers, including Apple, have pursued is average selling price growth -- something that's worked well so far in Apple's current iPhone product cycle -- but that's probably not a sustainable growth vector over the long term.

Will this strategy succeed?

The key for Apple to gain share, in my view, will be to strengthen the competitiveness of its product portfolio. Clever marketing, like the advertisements that MacRumors commented on, can help to some degree, but the smartphone market is replete with aggressive players that continually push the feature/technology envelope.

Apple, in some respects, has fallen behind the competition in terms of technology (e.g. camera quality) as well as in form factor (e.g. smartphones with greater than six-inch displays).

It's unsurprising, then, that Apple's market share, per IDC, grew just 100 basis points in 2017 compared to 2016 -- the products that Apple offered throughout most of calendar year 2017 just weren't exciting enough to drive a large share shift.

The company's upcoming iPhone lineup, however, looks to remedy many of the competitive deficiencies that the current lineup has. That, coupled with good marketing toward Android-based smartphone users, could help the company start growing its market share.

Fundamentally, though, Apple needs to deliver impressive, unequivocal leadership products at each of the price points it offers if it wants to see a significant share shift in its favor. The company's performance over the next few years will tell us if Apple has what it takes to deliver a multi-year share gain story or if it'll ultimately stagnate.