The Avengers' latest outing is off to a massive start and illustrates the brilliance of Disney's long-term franchise film model.

When Disney (DIS -0.75%) laid out plans for a Marvel movie universe that would introduce heroes like Iron Man, Captain America, and Thor with solo movies that would set up event-style team-up films, the risk of failure was high. Making a good superhero movie is hard enough, but putting the burden of a connected universe on the individual releases -- which must forge the path for a decadelong franchise -- is another matter entirely.

The gamble has paid off spectacularly. If any doubts remained about the significance of the Marvel Cinematic Universe (MCU), the record $640.9 million opening-weekend global ticket sales for Avengers: Infinity War should make it clear that Disney and Marvel have masterminded one of the most successful film franchises ever. 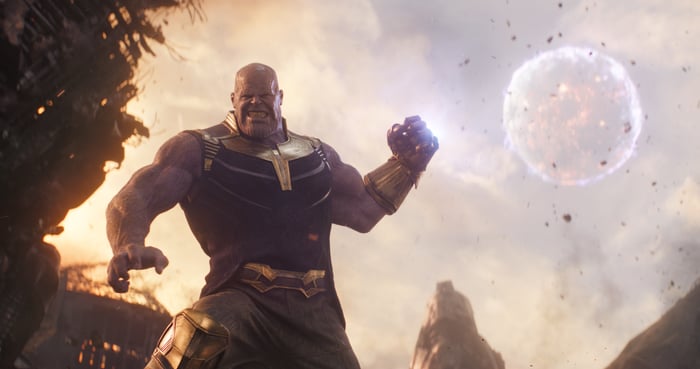 The Avengers are back with a vengance

For reference, The Force Awakens went on to gross nearly $2.1 billion in global ticket sales. Infinity War will need strong legs to reach that figure, but its explosive debut, strong word of mouth, and better-than-expected international performance suggest that the picture will at least set a box office record for the Avengers series.

Outside the U.S., the film accumulated a $382.7 million opening -- second only to the $440 million international debut posted by Comcast's Fate of the Furious last year. Infinity War set records in India and South Korea, dramatically outperformed expectations in Mexico, and has yet to open in major markets including China and Russia.

The power of the universe

The consistently high quality of MCU films and the promotional benefits of the connected-universe model have created a halo effect that touches each new series entry. Performance for the franchise's recent releases has been nothing short of spectacular.

Black Panther was released in February and has gone on to gross more than $1.3 billion worldwide. It also set a record for a solo superhero film in the American market, with roughly $690 million in ticket sales. Thor: Ragnarok was released in November 2017 and set a series record with roughly $854 million in worldwide sales across its theatrical run. That gross was $200 million more than the tally for the previous Thor film. Even the co-production with Sony to bring Spider-Man under the Marvel cinematic umbrella was a resounding success, with Spider-Man: Homecoming grossing roughly $880 million globally and winning approval from audiences and critics.

At present, it looks as if the MCU can do no wrong.

The Marvel Cinematic Universe kicked off with the release of Iron Man in 2008, but it wasn't until 2009 that Disney purchased the comic book company and its characters for roughly $4 billion. The deal has been an unquestionable win for the House of Mouse that has shaped the box office over the last decade.

Under the guidance of studio head Kevin Feige, the Marvel production team has put together one of the most impressive streaks in entertainment industry history. Marvel Studios meticulously charted a trajectory of solo films and crossovers, assembling a star-studded cast for the franchise and regularly finding ways to push the broader property to new heights.

In fact, the only direct sequel within the MCU that didn't manage to eclipse the ticket sales of its immediate series predecessor was Avengers: Age of Ultron -- with the 2015 film's $1.4 billion in ticket sales falling short of the $1.5 billion that The Avengers managed in 2012.

The 19 MCU films have now grossed a combined $15.4 billion in global ticket sales, and the franchise looks like it will continue racking up successes. Using ticket sales that haven't been adjusted for inflation, the series accounts for three of the top-10 highest-grossing movies ever. Five of its films have grossed more than $1 billion at the box office, and Infinity War should easily become the sixth. No series save for Star Wars has evinced comparable box office staying power.

Standing out from a crowded field

Most big movie studios have jumped into the superhero game, but none have come close to the success built by Disney and Marvel. The MCU films, almost without exception, have played well with critics and audiences. Thor: The Dark World stands as the franchise's worst-reviewed entry -- with a favorable score from 66% of professional reviewers on Rotten Tomatoes. And 13 movies in the series have managed to score at least an 80% positive score on that popular review-aggregating website. For contrast, of Time Warner's five DC Comics Extended Universe films, only Wonder Woman has managed to notch above a 60% favorability score among listed critics.

Compared to the MCU, the DC Extended Universe was put together in hasty fashion, and it's probably fair to say that this contributed to unevenness in the tone of Time Warner's superhero franchise, the quality of its releases, and their financial performance. Despite featuring familiar heroes like Batman, Superman, Wonder Woman, and the Flash, Justice League grossed just $658 million globally last year. Ticket receipts for Avengers: Infinity War will surpass that numerical barrier less than a week after release.

The MCU is delivering wins at a crucial time

The success of Avengers: Infinity War bodes well for the House of Mouse on multiple fronts. With Disney's media networks segment facing pressures from cord-cutting trends and declining ratings at ESPN, strong performance from the theatrical and parks sides of the business is crucial. That's even more important as the company explores new avenues to ensure it keeps pace with the changing entertainment-industry landscape.

Infinity War demonstrates the MCU's staying power, and that casts a more favorable light on Disney's move to shift its content away from Netflix in favor of starting its own streaming services. The film's monster success also increases the appeal of Disney's pending acquisition of Twenty-First Century Fox's film assets. Securing the movie rights to the X-Men and other Marvel characters that are owned by Fox is a key part of the deal for Disney, and the evidence offered by Infinity War that the MCU still has room to expand increases the value of the assets it stands to absorb.

What's next for Marvel and Disney?

With Infinity War now on track to be the highest grossing film in the Avengers line, it's no stretch to say that the MCU is stronger than ever. The film's ticket sales could climb north of $1.8 billion, and it's very likely that the follow-up movie set to release in May 2019 will also be a huge hit.

Next year's Infinity War sequel will wrap up cliff-hangers and plot threads from the series' recent release, but it's far from an end for the franchise. In keeping with Marvel's long-term development outlook, the studio already has more than 20 additional films planned.

With the MCU, Star Wars, and its wealth of other popular properties, Disney is dominating at the box office. If the company can manage to keep audiences enthralled with its tales of superheroes, that trend seems likely to continue throughout the next decade.