First Solar's (NASDAQ:FSLR) gains over the past year were driven almost entirely by the threat, and then realization, of tariffs on solar imports. Luckily, First Solar's cadmium-telluride based thin-film solar panel wasn't included in the tariff decision, giving the company a wide-open U.S. market in which to sell solar panels with very little price competition.

Management took full advantage of the opening, booking 9,000 megawatts (MW), or nearly $8 billion of potential sales, to be realized over the next four or five years. First Solar even went so far as to increase planned manufacturing capacity in 2020 from 4,000 MW to 7,600 MW just so it could take full advantage of the U.S. market. It seemed nothing was going to stop First Solar's tariff-free ride in the U.S., until now. 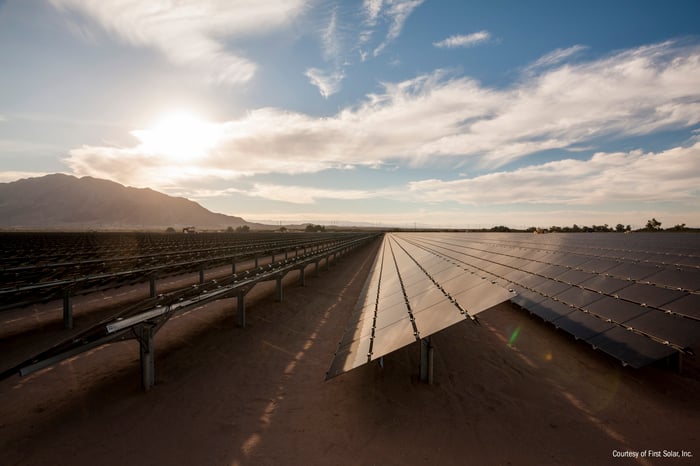 An end to solar tariffs could be in sight

This past Thursday, U.S. Representative Jacky Rosen of Nevada filed a bill that would eliminate the tariff President Trump put on solar cell and panel imports. Tariffs are currently set at 30% for solar panels and will decline 5% per year before phasing out in four years.

The legislation has bipartisan support with two Representatives from California and South Carolina each backing the bill. It's not clear if it would have support of either house of Congress, but the fact that it's circulating is enough for investors to worry about the potential consequences for First Solar and its stock.

Since April 26, 2017, the day Suniva filed its Section 201 trade case that eventually led to solar tariffs, First Solar's stock is up 156.5% and is easily outpacing rivals. Tariffs are of critical importance in keeping First Solar's stock where it is. 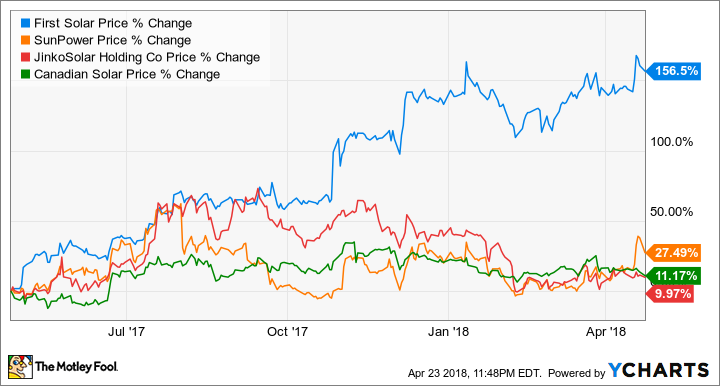 From a financial perspective, the tariffs have been critical to keeping First Solar profitable. The chart below shows the gross margins First Solar expects from contracted sales and from incremental new sales in the future. You can see that Series 6 solar panels, which is the newest solar panel from First Solar, expect to sell with a gross margin of over 20%. If the 30% import tariff were eliminated, it could lead to solar panel price reductions of 20% to 25%, based only on the added cost of the tariff for competitors. I don't think First Solar's gross margins would fall to 0% if tariffs were eliminated, but a sharp reduction in gross margins to the low-teens isn't out of the question, which would make it tough to make a profit on solar manufacturing. 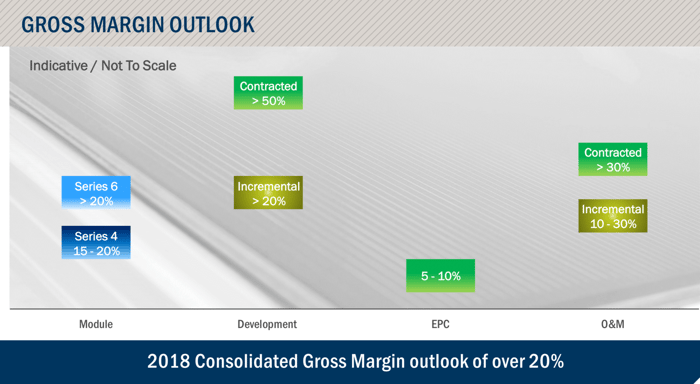 We also know that First Solar is highly dependent on the U.S. market for sales. The company doesn't break out results or bookings by region, but we know that First Solar has publicly announced 1,195 MW of specific solar panel supply deals announced since September 2017 and 1,095 MW of those contracts are in the U.S. In addition, an unnamed U.S. customer has accounted for 1,200 MW of bookings in the past year.

First Solar also has a late-stage pipeline of booking opportunities of 8,300 MW and nearly three-quarters of that is in North America. Since First Solar hasn't been a significant player in Canadian or Mexican markets it's safe to say a majority of that pipeline is in the U.S.

First Solar has done a great job booking as many U.S. sales as it can thru early 2022 when tariffs are set to expire. But we need to keep an eye on booking pace through the rest of the year, especially considering the recent expansion in U.S. manufacturing capacity. Management said during the first quarter 2018 conference call that it has 3,000 MW of production yet to book to be sold out through 2020. Given the 7,600 MW annualized production rate exiting 2020, there would be an additional ~9,000 MW of production in 2021 and before tariffs expire in February 2022. In total, there's still about 12,000 MW of solar panel production that First Solar needs to book before tariffs expire. That exceeds the 10,600 MW in currently contracted bookings, so there's still a lot riding on tariffs for First Solar.

All eyes are on Congress again

Solar stocks have traded with the whims of Washington, D.C., for the past year, and it's possible that trend will continue. If this bill to eliminate solar tariffs gets any legs, it could be very disruptive to First Solar long term. Customers won't be able to go back on the 9.0 GW of bookings made since early 2017, but future bookings will be impacted, and First Solar's tariff driven windfall could be over. Given the gains in First Solar's stock over the past year, the downside could be substantial for investors.