You've at least heard of its flagship product, and may even use it in your household or garage. Did you know you could own its stock?

The first rocket in the Atlas family, which would become the first to send American astronauts into Earth's orbit, was designed in 1953 in San Diego, CA. Rocket Chemical Company was founded the same year and in the same city to supply a single product that could ward off corrosion for the new intercontinental missiles: WD-40.

Unfortunately for Rocket Chemical Company, now WD-40 Company (WDFC -1.91%), things haven't been nearly as exciting in the 65 years since. Today the multifunctional product finds more use fixing squeaky doors in moldy basements than protecting rockets destined for space. Adding to the snoozefest, WD-40 Company still relies almost exclusively on its flagship product. No wonder this boring stock is flying under Wall Street's radar.

Then again, boring is often an investor's best friend, and that has a lot to do with what makes WD-40 Company a great buy. Here's why you shouldn't pass it up. 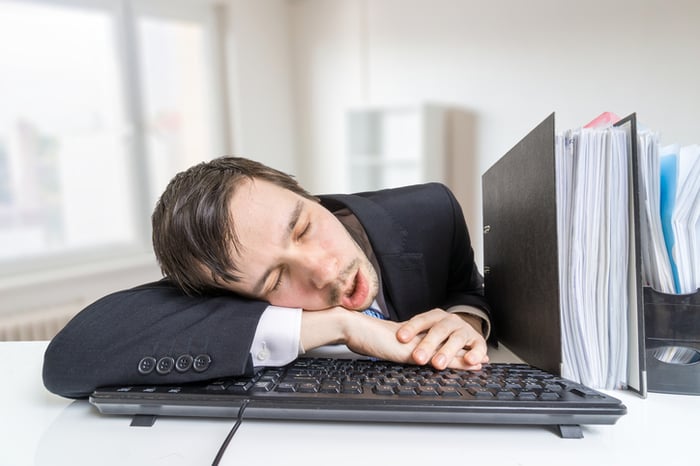 While WD-40 Company offers more than WD-40 today, the business is heavily reliant on its core group of maintenance products. The segment is dominated by formulations of WD-40, although it includes the brands 3-IN-ONE and GT85 as well. The company also sells six different brands of household and cleaning products, including 2000 Flushes, Spot Shot, and Lava. The portfolio has found itself in a slow decline in recent years, but provides strong enough margins that management has (so far) not been tempted to divest the collection of cleaning brands.

Say what you want about going from selling anti-corrosion products for rockets to selling toilet bowl cleaners, but shareholders certainly haven't had any reason to complain -- the stock has delivered total returns of 168% in the last five years, nearly double that of the S&P 500.

The nearly linear growth continued through the first six months of fiscal 2018, which ends in August.

What doesn't stand out in the table above is the fact that maintenance products are growing at a healthy clip in all global regions, while cleaning products are seeing sales decline in North and South America (segment revenue increased 15% in Europe and 6% in Asia in the year-over-year comparison).

Another interesting data point from SEC filings: While new WD-40 product formulations and spray types are helping to boost maintenance products sales in all regions, WD-40 Company is also exploiting growing do-it-yourself (DIY) movements with its marketing campaigns in Europe. Maintenance segment sales grew 12% year-over-year in the region, accounting for 60% of companywide sales growth during the period. While a little over half of that is due to currency fluctuations, even the constant currency growth of 5% reported in the first half of the current fiscal year is well ahead of anemic GDP increases in slow-growing European countries.

Meanwhile, total maintenance segment sales growth of 8% in the comparison periods hints that the 65-year-old wonder product has plenty of room to run. That may be needed given management's goal of growing total annual revenue from $380 million last year to $700 million by 2025. 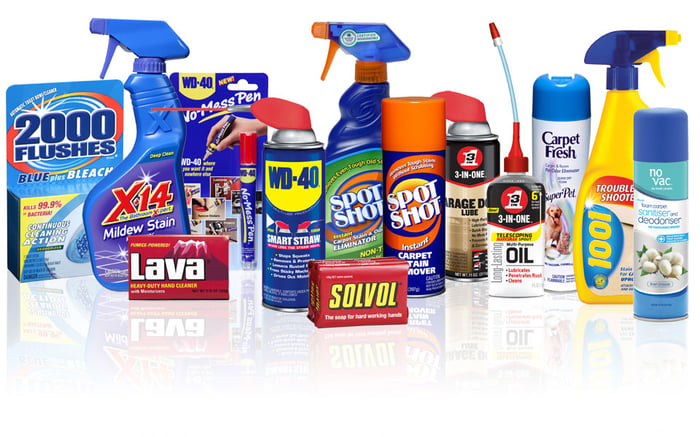 Despite being around since 1953 and owning one of the most identifiable brands in the United States, WD-40 Company has a market cap of just $1.9 billion. Management wants to change that by delivering some eye-popping growth in the years ahead, broken down as follows:

One thing stands out: The company's 2025 growth targets are pretty ambitious. WD-40 Company will get a slight boost from the new corporate tax rates in the United States, but has relatively little room for error when it comes to international sales growth. European sales for both segments grew at double-digit clips in the first half of fiscal 2018 compared to the year-ago period, but that may be difficult to keep up. Making things more difficult is the fact that sales in Asia, specifically China, have been relatively flat on a constant currency basis. That's likely due to fierce competition from China's home-grown chemical manufacturing industries.

While ambitious, the growth plan is achievable. Then again, even if the company fails to hit its lofty targets, there's only upside for shareholders (it's not like Wall Street is covering the stock anyway). Growing revenue at an average annual rate of 6% would still get WD-40 Company to $600 million in annual sales by 2025. For a low-overhead and mature business that's shown itself capable of converting 15% of revenue into net income and nearly 12% into operating cash flow, that can only mean great things for long-term investors.

Keep it simple when investing

Any business that makes it nearly 65 years relying almost exclusively on a single product is probably doing something right. That's definitely the case when it comes to the WD-40 Company. While the relatively small yet healthy business has only managed to earn a $1.9 billion market cap over the decades, that will change as management embarks on a path to meeting its ambitious 2025 growth targets.

And even if WD-40 Company falls short, there's not much downside for investors, who can collect a steady 1.7% dividend  yield along the way. Given the stock's history of easily beating the market, I think investors can expect to do quite a bit better than that with this boring stock.