2018's financial results are starting off with a bang for the gaming industry. Wynn Resorts, Limited (NASDAQ:WYNN) reported an outstanding quarter early last week, and Las Vegas Sands Corp. (NYSE:LVS) followed with its own impressive report on Apr. 25.

It's no surprise that results in Macau were up given the gaming growth of 19.1% in the region in the first quarter. But the amount of growth and where it occurred should please Las Vegas Sands' investors right now. 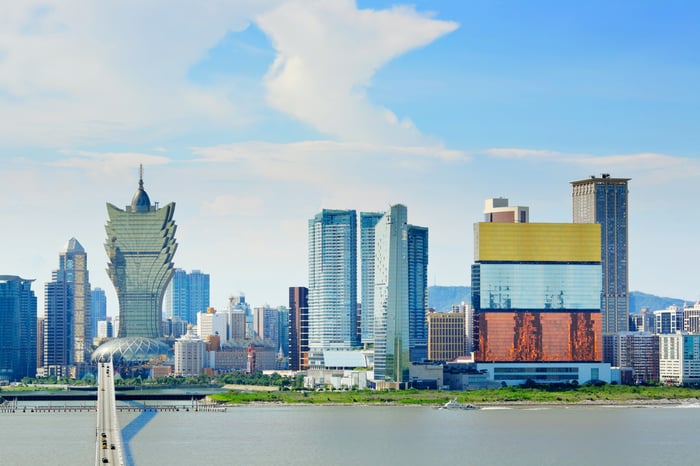 Adjusted property EBITDA, which we use as a proxy for cash flow coming from the resort and casino, was up 30.7% to $1.50 billion, helped by a little good luck in the quarter. Adjusting for what the company expects to be "normal" luck, EBITDA would have been $1.37 billion.

Beneath the headline numbers, there are some clear trends emerging in Macau, the company's biggest market with over half of total EBITDA. The big one is that the Cotai region is pulling gamblers away from the Macau peninsula, which generally has older resorts. The pull in the first quarter likely came from the opening of MGM Cotai and fewer construction projects around Cotai as finishing touches are put on new resorts.

To illustrate these trends, I've included the table below of gaming volume and EBITDA from Las Vegas Sands' key resorts. VIP gaming volume (rolling chip volume) and mass market play (nonrolling chip volume) are an indicator of the amount of gambling at each resort and don't include the luck factor that can swing results quarter to quarter. You can see that most Cotai resorts are outperforming the 19.1% in gaming growth for Macau overall, indicating that Las Vegas Sands is taking market share.

The one resort performing significantly worse last quarter was Sands Macau. This is the company's oldest resort and is on the Macau peninsula, so it's not surprising the property is losing share to bigger, newer resorts on Cotai.

In Singapore, Marina Bay Sands is Las Vegas Sands' most profitable resort and a key to the company's profitability long-term. But you can see above that VIP gaming volume dropped 17.3% in the first quarter, offset by a 9.6% rise in mass market play.

Despite the decline in VIP play, you can see that property EBITDA jumped 48.6% in the quarter, which was due in large part to a very lucky quarter in VIP rooms. Table game hold, or win percentage, was 4.77% in the quarter compared to the expected range of 2.7% to 3%. If luck had been at a more normal level, the company would have generated about $430 million in EBITDA.

Still the king of gaming

Las Vegas Sands is riding the wave of growth in the regions it has been investing in for over a decade. Company CEO Sheldon Adelson saw the integrated resort as a way to draw Asian consumers and gamblers to Macau and Singapore, and built resorts that have come to define the region. In the first quarter of 2018, the company outperformed the market as a whole by simply being located in the right places and serving customers what they wanted from the casino floor to entertainment halls. That's why Las Vegas Sands is so profitable, and why it's still the king of gaming worldwide.