Please ensure Javascript is enabled for purposes of website accessibility
Log In Help Join The Motley Fool
Free Article Join Over 1 Million Premium Members And Get More In-Depth Stock Guidance and Research
By Daniel Miller - May 1, 2018 at 1:09PM

Production issues weighed on the company's Stuart Weitzman brand and will continue through the fourth quarter.

Shares of Tapestry, Inc. (TPR 1.24%), a designer and retailer of handbags, apparel, and footwear under well-known brands such as Coach, Kate Spade, and Stuart Weitzman, are down 12% as of 11:20 a.m. EDT after the company released fiscal 2018 third-quarter results.

Net sales jumped 33% to $1.32 billion, fueled by its Kate Spade acquisition and 3% comparable sales growth at Coach. Adjusted earnings per share checked in at $0.54, topping analysts' estimates calling for $0.50, per Thomson Reuters.

"Kate Spade contributed to our overall performance, as we made continued progress on our integration efforts including the realization of synergies and the execution of strategic initiatives. Most importantly, we were delighted to announce the appointment of Anna Bakst as CEO and Brand President, Kate Spade who officially joined us in late March. Together with Creative Director Nicola Glass, we now have the leadership team in place to drive the brand forward globally." Victor Luis, chief executive officer of Tapestry, Inc., said in a press release. 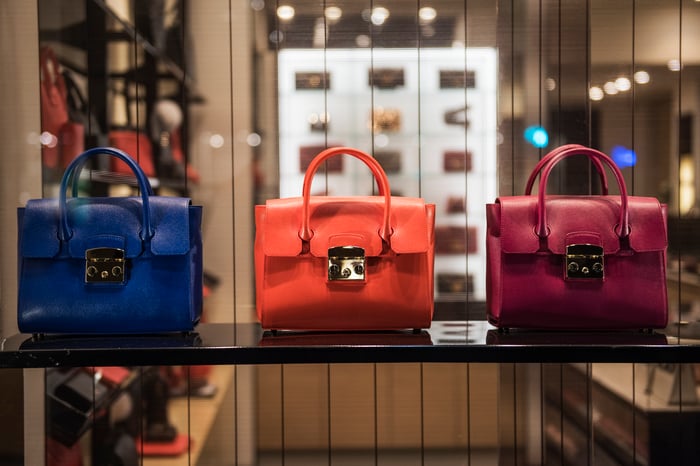 Despite reporting a sound quarter that topped estimates on the top and bottom line, investors appear to have concern about the company's Stuart Weitzman brand. Stuart Weitzman results were negatively impacted by production issues and poor sell-through of carryover styles, which weighed on sales and margins. Management noted the issues are likely to continue through the fall and winter. For long-term investors who believe in the company's ability to continue generating high-margin sales through its well-known brands, this is a short-term speed bump.