Kate Spade, part of the Tapestry (NYSE:TPR) family of fashion brands, showed off a new smartwatch for women at the recent Consumer Electronics Show. While the device isn't likely to make a big impact on the company all by itself, it's part of a strategy to expand the Tapestry lineup into a wider array of clothing and accessories. Here's what investors and tech-savvy fashionistas need to know.

The Kate Spade New York smartwatch is the first from the company featuring a touchscreen. The company first made its foray into the world of tech-enabled wearables with a hybrid watch, adding features like phone notifications, and activity and sleep tracking, but the latest design completely eliminates the traditional watch from its design and goes all digital.

As for the technology, the Kate Spade wearable uses Alphabet's (NASDAQ: GOOG)(NASDAQ: GOOGL) Android Wear platform. The watch is compatible with other Android devices as well as Apple (NASDAQ: AAPL) iOS, and relies on focused, consumer-oriented "micro apps" to make the device thoroughly Kate Spade. For instance, customized watch faces designed by the company allow the wearer to coordinate the accessory with clothing.

Beyond that, the software isn't much different than that of any other Android-powered watch. The real sell is an increased focus on style, as some have complained that the typical smartwatch is ugly. That isn't too surprising, considering wearable devices are a newer idea thought up by tech companies. Thus Kate Spade has tapped traditional watchmaker Fossil Group (NASDAQ:FOSL) for this and its other hybrid watches to offer a higher-pedigree alternative. 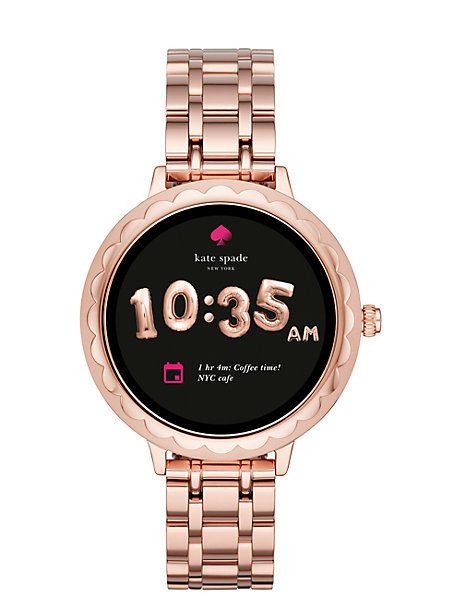 The Tapestry "house of fashion"

However, the wearable-device industry has become crowded, so the Kate Spade device is unlikely to make big waves in the marketplace. While it may hold appeal for the more fashion-conscious woman who doesn't want to sacrifice having connected features and activity tracking, this isn't the first or only attempt at improving the looks of the smartwatch.

The maker of Kate Spade's devices, Fossil Group, has its own line of "better looking" watches, some using the hybrid model and others with an all-digital approach. The company also builds watches under a license agreement for other fashion companies like Emporio Armani and Michael Kors (NYSE: KORS). That doesn't include leading wearable companies like Apple and Fitbit (NYSE: FIT) selling fashion-forward wristbands to elevate the style of their watches, too.

Kate Spade is expanding its lineup nonetheless. The company became a part of Tapestry over the summer of 2017. Tapestry is also the parent of leather goods maker Coach and shoe designer Stuart Weitzman. The company changed its name from Coach to Tapestry a few months after completing the Kate Spade acquisition to reflect its brand diversity.

CEO Victor Luis has been at the helm during a period of transition during which the focused handbag maker has transformed itself into a "house of fashion." The company's reach now extends beyond its roots to encompass all aspects of fashion, from clothing to fragrance to accessories, and the burgeoning world of wearables is next.

What does the new device mean for Kate Spade and Tapestry? Not much, other than the company has one more canvas on which to paint its style. The implications are bigger for tech companies like Apple and Fitbit, as myriad new options on the market could erode their market share over time. It thus behooves them to continue developing new features and health-tracking abilities to stay ahead of the pack and provide a reason for consumers to choose them.

The biggest winner? I think that's Alphabet, as the company is more than happy to continue licensing its operating system upon which a growing number of smartwatch makers are basing their hardware. Kate Spade and Tapestry are the latest to do just that.