Please ensure Javascript is enabled for purposes of website accessibility
Log In Help Join The Motley Fool
Free Article Join Over 1 Million Premium Members And Get More In-Depth Stock Guidance and Research
By Anders Bylund - May 2, 2018 at 7:11PM

The well-known electronics and office equipment name serves as a fantastic weather vane for a couple of important investing sectors.

It's been six months since I wondered why nobody wants to talk about electronics and office-products giant Canon (CAJ 1.58%). With the company's fresh earnings report on the table, let's break that uncomfortable radio silence again.

Here's a look at Canon's first quarter of 2018. As befits a mature industry giant with a household name and a $37 billion market cap, this quarter was a rock-solid effort packed with insight on Canon's target markets on a global level.

Canon's first quarter by the numbers

Data source: Canon. The company reports its results in Japanese Yen, which strengthened by 4.6% against the U.S. dollar between the first quarters of 2017 and 2018. The conversion to dollars here is based on the average exchange rate per quarter.

Canon's sales actually fell 1.2% year over year in the yen-based report, but a stronger yen still resulted in dollar-denominated revenue growth. Further down the income statement, the company reduced its operating expenses by 7%, resulting in stronger operating margins and a juicier bottom-line result.

What's going on below the glossy surface?

The key to Canon's first-quarter performance is found in the industrial segment. Here, high demand for semiconductor lithography equipment drove yen-based sales 16% above the year-ago period, while the division's operating profits more than doubled. Canon's management expects double-digit sales growth in the second quarter thanks to healthy market activity.

This can be read as good news for the semiconductor industry as a whole, since manufacturers in that space are doubling down on their own infrastructure investments. No business manager worth his salt would do that in the face of a weak market.

Canon also is a leading supplier of vacuum deposition equipment used in the manufacturing process for organic light-emitting diode (OLED) screens. Citing "an expanding customer base" in the OLED space, Canon saw this product category's revenues rise by double-digit percentages, with no signs of a slowdown. Investors in OLED-technology specialist Universal Display (OLED 1.07%) should embrace that detail, though the rosy writing has been on the wall for some time. 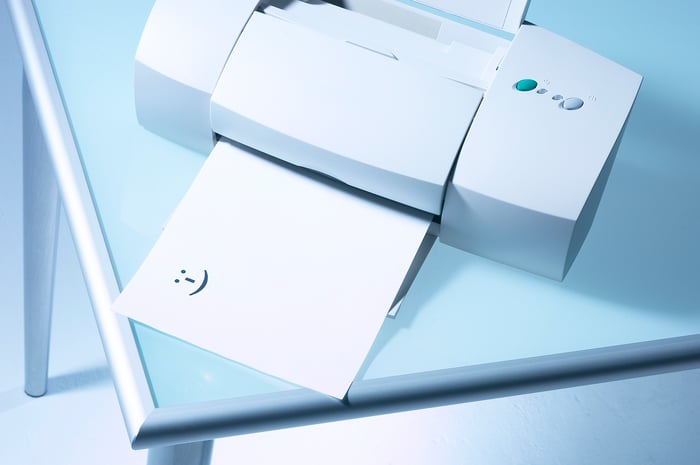 The upshot: Canon is a great barometer for several markets

None of this quarter's numbers came as a huge surprise to Canon's management, who held full-year revenue and profit targets steady across the board. The company still is aiming for approximately 5% sales growth and 25% higher operating profits in 2018, currency exchange effects not included.

To achieve these targets, Canon is building cloud-computing support into many of its office printers and copiers. The company aims to ship 126 lithography systems into the semiconductor sector this year, up from 70 systems in 2017. In the digital-camera market, Canon is planning to launch several new products in the back half of the year, including a series of lightweight mirrorless cameras aimed at the video-production sector.

The company is executing a solid business plan with solid profit growth squarely in its sights. At the same time, the stock is trading at an affordable 17 times trailing earnings and nine times free cash flows. If nothing else, a small investment in this well-known company could motivate you to keep a closer eye on Canon's results -- which will give you a better understanding of the semiconductor and OLED markets, too.