Please ensure Javascript is enabled for purposes of website accessibility
Log In Help Join The Motley Fool
Free Article Join Over 1 Million Premium Members And Get More In-Depth Stock Guidance and Research
By Keith Speights - May 2, 2018 at 2:32PM

The pharmacy services giant usually sees faster growth from its PBM instead of its retail segment -- but not this time around.

That wasn't the end of the good news from tax reform, though. CVS Health announced its first-quarter results before the market opened on Wednesday. Uncle Sam helped out again, but there were also other factors serving as tailwinds for the company. Here are the highlights from CVS Health's first quarter. 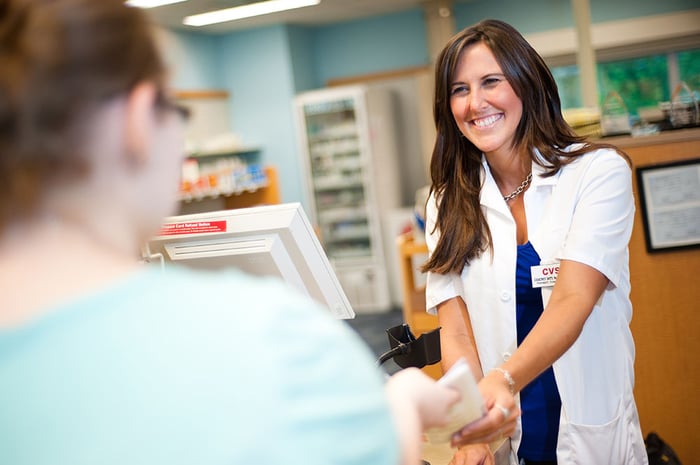 In CVS Health's fourth quarter, the company's pharmacy services segment, which includes its pharmacy benefits management (PBM) operations, contributed the fastest revenue growth. The tables were turned in the first quarter, though, with the retail/long-term care (LTC) segment claiming the highest growth rate.

First-quarter retail/LTC sales increased 5.6% year over year to $20.4 billion. There were several drivers of this growth. A nasty flu, cough, and cold season resulted in higher front-store sales. This was expected since CVS Health's sales were boosted by a higher volume of flu cases in the fourth quarter also.

The retail/LTC segment also received help from the calendar. The Easter holiday, which usually generates heavier customer traffic, occurred in the first quarter of 2018 but was in the second quarter last year. Other factors contributing to higher sales in the retail/LTC segment included increased adoption of the company's patient care programs, new partnerships with other PBMs and health plans, inclusion in more Medicare Part D networks, and higher brand prices.

Some headwinds from 2017 carried over into the first quarter of 2018, though. Pharmacy services continued to see price compression. Retail/LTC continued to experience reimbursement pressure. Both segments' sales were dented somewhat by recent generic drug launches.

We generated solid results in the quarter, benefiting from higher prescription volumes within our retail pharmacy business and a lower effective income tax rate. At the same time, we continue to focus on long-term growth initiatives and to invest in process improvements and technology enhancements that will position us well to expand our reach in providing access to high-quality and more affordable care.

We continue to innovate in the healthcare market. Recently, we introduced "Real-time Benefits," a process to share plan design in real-time at the point of prescribing with the physician. During the first quarter, we also launched an initiative, "Rx Savings Finder," to combat rising drug prices. This initiative provides improved visibility into drug costs at the pharmacy counter. These initiatives have benefited consumers by improving transparency and lowering costs.

CVS Health revised its full-year 2018 revenue guidance to reflect its good first-quarter results. The company now expects revenue growth in 2018 between 1.5% and 3%. CVS had previously projected full-year revenue growth between 0.75% and 2.5%. Full-year adjusted EPS is expected to be between $6.87 and $7.08, reflecting 18% year-over-year growth at the mid-point of the range.

The biggest thing for investors to look forward to in the coming months is CVS Health's planned acquisition of Aetna (AET). CVS Health is in the process of responding to its second request from the U.S. Department of Justice. The company submitted to 28 state insurance departments in January and has already begun to receive approvals in some states. CVS Health continues to think the Aetna deal will close in the second half of 2018.