Please ensure Javascript is enabled for purposes of website accessibility
Log In Help Join The Motley Fool
Free Article Join Over 1 Million Premium Members And Get More In-Depth Stock Guidance and Research
By Evan Niu, CFA - May 2, 2018 at 5:08PM

No, it's not a boatload of unsold HomePods or iPads waiting to be written down.

Apple (AAPL 0.88%) CEO Tim Cook has always considered inventory to be "fundamentally evil." When companies overbuild inventory, it just sits around losing value -- typically 1% to 2% per week, in Cook's estimation. If it sits around too long, it will need to be written down, with the company eating a charge in the process. On the other hand, having too little inventory can leave money on the table if the company isn't sufficiently meeting demand. Keeping lean inventory is the key to enjoying strong inventory turnover, a metric that many investors keep a close eye on. It's very much a balancing act.

One thing that jumped out to me during last night's fiscal second-quarter earnings release was a huge sequential spike in the company's inventory. Apple's inventory has just skyrocketed to the highest level it's ever been -- by far. 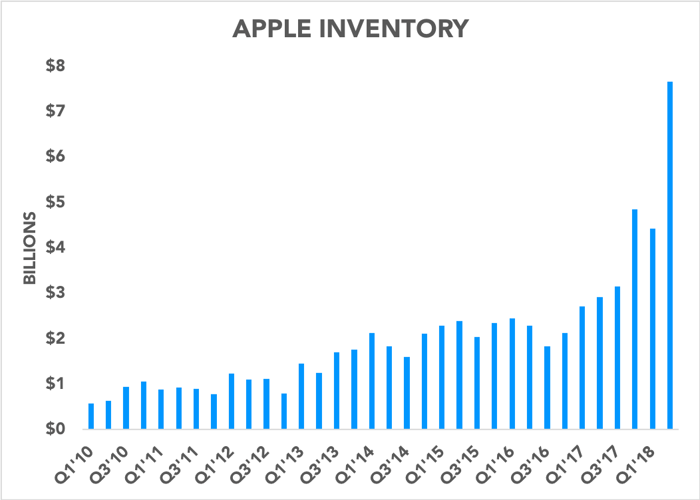 For a company that prides itself on lean inventory management thanks in part to Cook's reputation as an operations mastermind, the jump initially looked like a yellow flag. Did Apple build way too much of some product that was collecting dust on Apple Store shelves? Surely it didn't build that many HomePods, which aren't selling well. It also seemed unlikely that Apple ordered too many of the new iPads in preparation for launch within the last days of the quarter after hosting an education-oriented event in Chicago. 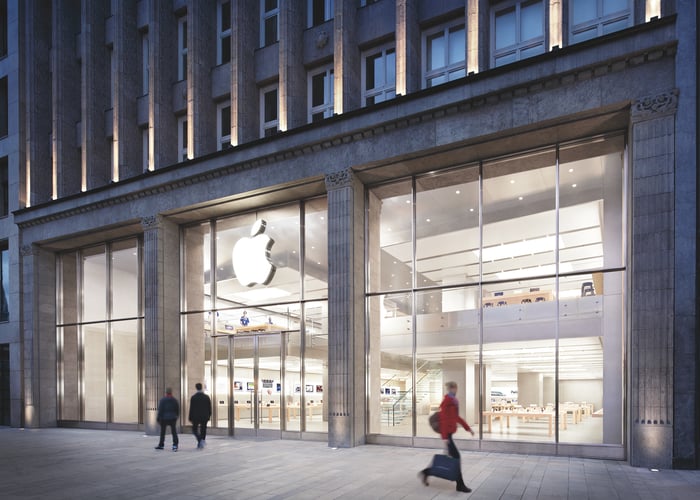 Before you get too concerned, remember that there are different broad categories of inventory: raw materials, work in process, and finished goods. Specifically, Cook is usually worried about the latter. Analyst Shannon Cross was able to get to the bottom of it, with CFO Luca Maestri confirming that Apple is essentially stocking up on components.

Maestri: Yes. Shannon, you know that we've always generated significant amount of cash through working capital. We've got a negative cash conversion cycle, and we plan to continue to have that. Our inventory level has gone up. It's just a temporary event. We have decided to make some purchasing decisions given current market conditions, and that should unwind over time.

Cross: So that was essentially component purchases?

That inventory is not the type that is sitting around unsold.

Relief is on the horizon

As far as which type of component we're talking about, it's almost certainly related to memory. Apple is the largest buyer of memory in the world, making it particularly sensitive to changes in memory pricing, which have been steadily marching higher for the past two years. Just last quarter, Maestri said that memory pricing adversely impacted gross margin by 70 basis points. That translates into a hit of nearly $430 million.

In other words, Apple is anticipating memory pricing to continue rising, in which case it's better to stock up now ahead of those price increases. The good news is that there's light at the end of the tunnel: Pricing is expected to hopefully peak later this year. Maestri concluded, "And so that should provide some level of stability."