Please ensure Javascript is enabled for purposes of website accessibility
Log In Help Join The Motley Fool
Free Article Join Over 1 Million Premium Members And Get More In-Depth Stock Guidance and Research
By Rick Munarriz - May 2, 2018 at 1:25PM

The controversial theme park operator is offering complimentary beers at Busch Gardens Tampa while SeaWorld Orlando sets its sights on a kid-friendly addition for 2019.

One of SeaWorld Entertainment's (SEAS 8.21%) most visited theme parks is going old school as a way to drum up turnstile clicks in lieu of a major new attraction this year, just as the operator's most popular attraction will be turning to classic Sesame Street characters to win back young families come 2019.

Busch Gardens Tampa -- SeaWorld's second most visited park, attracting nearly 4.2 million guests in 2016 according to industry watcher Themed Entertainment Association -- started offering drinking-age adults free beers on Tuesday, a promotion that harkens back to a time when the park was owned by Anheuser-Busch and offered complimentary brews at his Hospitality House. An hour's drive away, at SeaWorld Orlando -- the chain's most visited attraction with 4.4 million guests in 2016 -- the park is announcing that the Sesame Street-themed makeover of its Shamu's Happy Harbor kid area will be ready by next year. 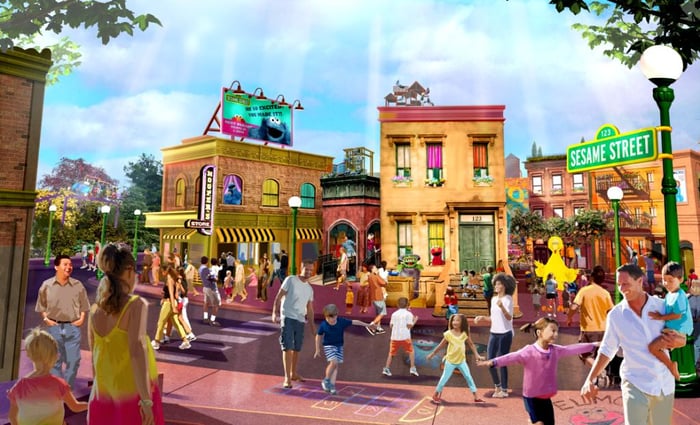 Swimming back to shore

SeaWorld Entertainment is in a tough spot. Attendance at its SeaWorld-branded parks has fallen sharply since 2013's Blackfish documentary turned a critical eye to parks that keep killer whales in captivity. It's now on its third CEO since being called out by the documentary, and efforts to restore its brand have fallen short.

The stock has started to bounce back. SeaWorld shares have soared by more than 50% since bottoming out in November, but the fundamentals aren't coming along for the ride. SeaWorld reports financial results next week, and analysts are bracing for another rough showing. Wall Street pros see a widening deficit for the first quarter on a modest 6.5% increase in revenue.

An actual top-line uptick may seem encouraging, and this would sadly be SeaWorld's strongest quarterly revenue growth in five years. Unfortunately, it's only the timing of the Easter holiday -- moving from April last year to March this time around -- that will drive the improvement. Revenue will still be short of where it was two years ago, as SeaWorld posted a brutal 15.4% decline during last year's first quarter.

SeaWorld Entertainment has yet to crack the code on what will keep guests coming back for more, bringing us back to the free beers at Busch Gardens Tampa. From now through Aug. 5, adult visitors can claim up two complimentary beers a day at the Garden Gate Cafe restaurant that once used to house Anheuser-Busch's Hospitality House. The beers will rotate every two weeks, a clever ploy to keep brew-seekers close. It's also a way to drum up interest without spending on a new ride. Busch Gardens Tampa hasn't added a major new attraction since the Cobra's Curse roller coaster opened in 2016. The park's once-classic Gwazi dueling wood coaster remains embarrassingly on-site despite having closed more than three years ago. The beer promotion is clever nostalgic tug, but the park will need to come back with an even bigger draw in 2019.

Next year is going to be a big year for SeaWorld's biggest rival on both coasts. Disney (DIS 3.69%) is introducing Star Wars: Galaxy's Edge, a highly anticipated 14-acre expansion to Disneyland in California as well as Disney's Hollywood Studios in Florida. It's going to draw a lot of tourists to Central Florida as well as Southern California, where SeaWorld's original San Diego park resides, but these visitors aren't going to stray to neighboring attractions unless there's something fresh coming in 2019.

SeaWorld Orlando probably won't be able to do enough to make the most of the spike in tourism. When Sesame Street Land was initially announced last year, it was set to open as late as the fall of 2022. SeaWorld pushing the opening up to next year suggests that SeaWorld Orlando may not have a major new game changer of a ride to unveil in 2019.

Sesame Street Land won't be a bad addition. The new area will have more appeal to young families than Shamu's Happy Harbor. It will certainly be less controversial. However, all indications suggest that it will be a modest makeover, and certainly not the kind of attraction that will pull guests away for a day when they spend a week at Disney World next summer. SeaWorld Entertainment is doing some things to shake up a day at its parks, but it's not doing enough of the right things.