Please ensure Javascript is enabled for purposes of website accessibility
Log In Help Join The Motley Fool
Free Article Join Over 1 Million Premium Members And Get More In-Depth Stock Guidance and Research
By Asit Sharma - May 3, 2018 at 6:45PM

Management discussed retail partner bankruptcies, customer credit quality, its receivables deal with PayPal, and other key topics on its most recent earnings call.

In the earnings conference call Synchrony Financial (SYF 4.68%) conducted with analysts on April 20, management touched on areas of immediate investor concern, as well as broader strategic themes. Below, let's briefly review five key points made by executives during the call that shareholders shouldn't miss this quarter.

1. We can manage adverse partner events

Recently, the hhgregg bankruptcy provided an opportunity for us to accelerate the launch of another successful network card called Synchrony HOME. This card is accepted by retailers at nearly 18,000 locations in verticals such as home furnishings, flooring, and electronics. -- CEO Margaret Keane

The current fierce disruption in the retail industry has exposed one of the pitfalls for a credit issuer like Synchrony in dealing with retail partners: an increasing possibility that a household name may declare bankruptcy.

In such cases, Synchrony seeks to maintain the relationship with the cardholder. It's a multistage process, and the company first reaches out to remind customers that they're still responsible for their revolving credit accounts, regardless of the retailer's bankruptcy.

CEO Keane also cited the bankruptcy of Toys R Us to illustrate the organization's approach to controlling credit delinquencies and avoiding charge-offs. Synchrony has offered to transition Toys R Us cardholders to the Synchrony Mastercard, adding an attractive 2% cash-back feature on all purchases to incentivize conversions.

2. Our reserve build came in below expectations

And the reserve build in the quarter was $164 million, lower than the $200 million to $225 million range we had expected and substantially lower than the $332 million reserve build in the first quarter of last year. Both reflect the moderating trends in credit normalization and slightly lower loan receivables growth as well as the impact from our underwriting refinements. -- CFO Brian Doubles

As I wrote recently, Synchrony has seen slight deterioration in its credit quality metrics in the last few quarters due to what it terms "credit normalization." Credit normalization is shorthand for higher default risk in consumer credit relationships, as the cycle of economic growth we've enjoyed since the great recession begins to show its age.

If credit normalization trends are moderating (expressed above as a lower quarterly reserve against bad debt), that's positive for shareholders, as it implies that future provisions for loan losses may be smaller, thus increasing net income.

On the other hand, a smaller reserve due primarily to slimmer growth in credit receivables is a less desirable outcome. In the first quarter of 2018, Synchrony's credit receivables expanded at a healthy rate of 6%, but the quote above indicates that shareholders should monitor receivables growth in the coming quarters. 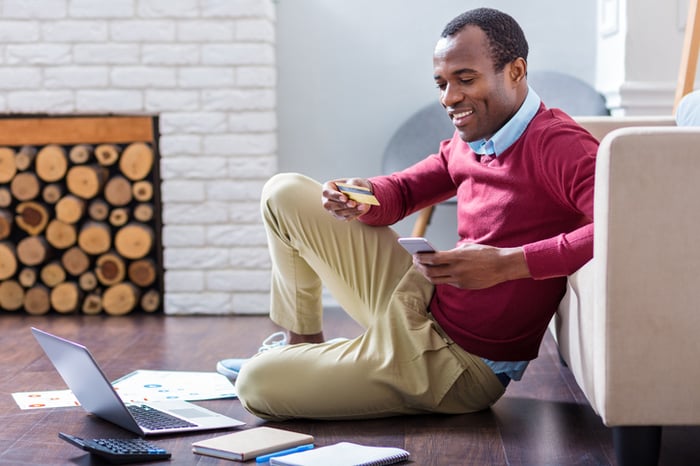 If you look at purchase volume by FICO stratification, we continue to grow at a fairly strong pace in accounts with a FICO score greater than 721, which increased 8% over the same quarter last year, while purchase volume for the below 660 FICO range actually declined 15%, reflecting the actions we have been taking. -- CFO Brian Doubles

Synchrony has made a gradual, years-long effort to shift its underwriting along the FICO score scale in favor of consumers with near-spotless credit. Since 2008, the company has cut the percentage of its cardholders with FICO scores at 660 and below from nearly 40% to 24%. Similarly, Synchrony has increased the proportion of cardholders boasting FICO scores of 661 or higher from 61% to 73% over the same period.

Of course, lending to lower-credit customers helps margin via higher interest charges on balances, and late fee assessments. But these advantages can be negated by delinquencies and write-offs, and it appears that over the long run, Synchrony would rather build volume with a slightly more creditworthy customer than attempt to manage revenue further down the FICO scale.

We expect to continue to drive growth in our direct deposit program by continuing to offer attractive rates and great customer service as well as building out our digital capabilities. Longer term, we continue to expect to grow deposits in line with our receivables growth. -- CFO Brian Doubles

As of its most recent balance sheet date of March 31, 2018, Synchrony Financial had $12.4 billion in securitized debt outstanding, and another $8.0 billion in senior unsecured notes, for a total of $20.4 billion in borrowings used to finance its credit activities.

But the company's biggest, cheapest, and most effective funding source comes from the customers of its wholly owned banking subsidiary, Synchrony Bank. At the end of the first quarter of 2018, the bank held $56.3 billion in customer deposits, at an aggregate interest rate payable of just 1.8%.

Synchrony attracts customers through online programs, as well as through third-party brokered accounts. Customer deposits comprise 72% of Synchrony's total credit activities funding. As you can see in the quote above by CFO Brian Doubles, the company is seeking to widen this competitive advantage by luring in new direct-deposit customers through an enhanced online presence.

... we don't just look at the loss rate when we're evaluating one of our programs. We look at the overall return that we're earning on the program; we look at the resiliency of those earnings in various scenarios, including stress scenarios. -- CFO Brian Doubles

As I discussed in April, Synchrony's upcoming $6.8 billion purchase of PayPal's credit receivables portfolio (PayPal Credit) is an attractive proposition for both companies. But there's a slight catch in that PayPal's consumer credit portfolio has a somewhat riskier profile than the typical Synchrony program.

This disparity makes sense when you consider that consumer credit has existed as simply a minor revenue stream for PayPal. PayPal has approached underwriting from a different perspective than a credit specialist might.

CFO Doubles explained during the call that a purchased program like PayPal Credit doesn't have to fit perfectly within Synchrony's typical credit criteria. Though highly important, risk and credit quality are simply two of many characteristics used to evaluate a program. The bottom line is that the potential for an attractive return from the PayPal portfolio outweighs mild risks associated with a slightly weaker aggregate credit profile.