Please ensure Javascript is enabled for purposes of website accessibility
Log In Help Join The Motley Fool
Free Article Join Over 1 Million Premium Members And Get More In-Depth Stock Guidance and Research
By Keith Speights – May 3, 2018 at 5:34AM

The delay of a major contract contributed to the healthcare technology leader missing its first-quarter revenue forecast.

Cerner Corporation's (CERN) sales growth was unimpressive when the company reported its 2017 fourth-quarter results in February. There was a hint of better growth ahead, though, with Cerner posting record-high bookings.

That better growth appears to be still in the future, however. Cerner announced its 2018 first-quarter results after the market closed on Wednesday. Here are the highlights. 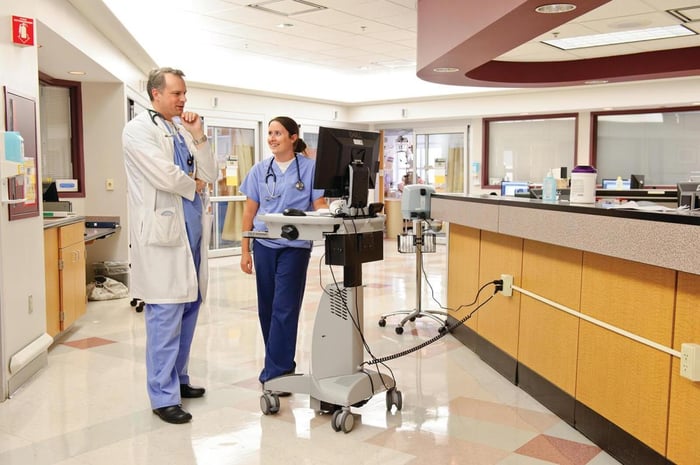 However, Cerner also posted sales declines in other categories. Sales of licensed software fell 5% from the prior-year period to $134.8 million. Revenue from subscriptions plunged 32% year over year to $76.6 million. Technology resale revenue slipped 1% from the first quarter of 2017 to $63.4 million. In total, Cerner's first-quarter revenue fell below its previous guidance of $1.315 billion to $1.365 billion.

Cerner's GAAP net income was helped by U.S. corporate tax reform. The company paid nearly $30 million less in taxes than it did in the same quarter of last year. However, that wasn't enough to offset significant spending increases. Operating expenses grew 6% year over year to $866.4 million. Still, Cerner's adjusted EPS in the first quarter matched the mid-point of the guidance range the company gave in February.

Once again, Cerner recorded solid bookings, which represent the amount of prospective revenue from contracts signed but not yet implemented. First-quarter bookings were just under $1.4 billion, bringing Cerner's total backlog to $14.6 billion.

Cerner president Zane Burke said, "Our results in the first quarter included strong bookings and cash flow and in-line earnings, but our revenue was below expected levels." He added, "Our mixed results and revised outlook reflect the delay of a large contract and a less predictable end market. However, we remain optimistic about our long-term growth opportunities due to our strong market position and portfolio of solutions and tech-enabled services that align with the pressures healthcare stakeholders are facing."

Cerner expects revenue to pick up a bit in the second quarter. The company projects second-quarter revenue between $1.31 billion and $1.36 billion. However, because of the weaker-than-expected first quarter, Cerner lowered its full-year 2018 revenue outlook. The company now expects full-year revenue between $5.325 billion and $5.45 billion, down from $5.45 billion to $5.65 billion.

Some of Cerner's weakness should only be temporary. As Zane Burke mentioned, the delay of a large contract weighed on the company's performance in the first quarter. The challenge for Cerner will be to convert its bookings backlog into implementations that generate solid revenue. Overall, though, the company's business continues to look sound.