Please ensure Javascript is enabled for purposes of website accessibility
Log In Help Join The Motley Fool
Free Article Join Over 1 Million Premium Members And Get More In-Depth Stock Guidance and Research
By Dan Caplinger – May 3, 2018 at 7:15PM

Simplification could result in higher valuations.

The tax reform bill has had a huge impact on corporate America, with lower corporate taxes helping to boost profits across nearly the entire spectrum of businesses during first-quarter earnings season. For private equity specialist KKR (KKR -2.71%), tax reform also provided the extra incentive to take a big step toward simplifying its business in an effort to squeeze better results from it.

Coming into Thursday's first-quarter financial report, KKR investors were generally prepared to see some headwinds emerge from the turbulence in financial markets during the first quarter. Rather than its results, most investors focused on KKR's decision to pull the trigger on a long-considered move to convert from partnership to corporation status, trading double taxation for greater simplicity and willingness among investors to put their money into the private equity company's shares. 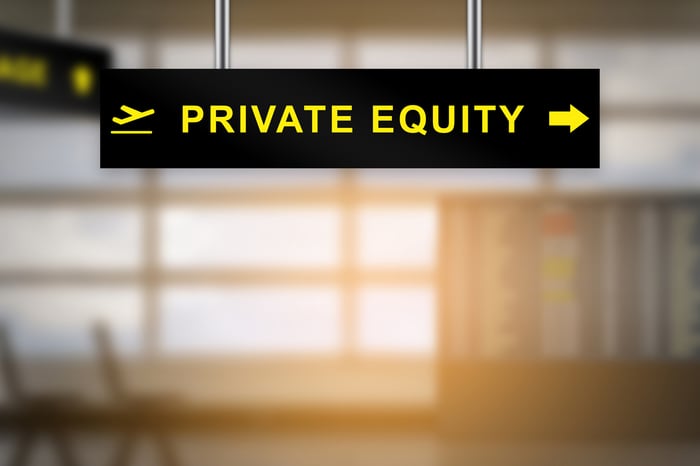 How KKR handled a tough quarter for the markets

KKR's first-quarter results showed the impact of the market swoon. Total reportable segment revenue plunged almost 30% to $727.5 million, with GAAP top-line numbers seeing similar declines on an absolute basis. After-tax economic net income also dropped 30% to $465.3 million, and that worked out to $0.42 per adjusted unit, down by roughly a third from year-ago levels.

Even with the tough market, KKR managed to sustain growth in some key areas. Assets under management were higher by 28% to $176 billion, although gains over the past three months slowed to just $8 billion. Book value rose about 3% to $11.98 billion, and the resulting $14.56 per unit represented a $0.36-per-unit boost from the end of 2017. Fee-paying assets under management were higher by almost $5 billion from year-ago levels, although they eased slightly lower in the quarter, and uncalled capital commitments rose to $58.8 billion, up from $41.2 billion 12 months ago.

Investors will get a nice payoff from their investment in KKR. The partnership announced after-tax distributable earnings of $0.37 per adjusted unit that are eligible for distribution. That will help to support a distribution yield of between 6% and 7%, although amounts have changed each quarter to reflect economic performance.

However, the big news from KKR came from its board of directors, which unanimously approved a plan to convert the entity from a partnership to a corporation effective July 1, 2018. In conjunction with that decision, KKR predicted that it expects to pay about $0.50 per share in annual dividends following the conversion. It will also boost the amount of stock it buys back, immediately implementing a full $500 million authorization for repurchases.

KKR co-CEOs Henry Kravis and George Roberts explained the thinking behind the incorporation move. "KKR's conversion from a partnership to a corporation is designed to broaden our investor base, simplify our structure and make it easier to invest in our shares," the two co-CEOs said. Currently, investors receive special K-1 tax forms that require them to do some complex accounting in order to prepare taxes effectively. Moreover, with some restrictions on holding partnership units in tax-deferred accounts like IRAs, the partnership form has been a deterrent for some would-be investors in KKR. Companies in other fields, such as oil and gas master limited partnerships, have already been converting to corporations even before tax reform took hold, but the lower corporate tax rates make the double-taxation that results from incorporating less onerous than it was in the past.

That said, KKR still has a business to run, and the private equity company seems optimistic about how things are going. Despite declining global markets, the various components of KKR's business performed reasonably well given the circumstances. The biggest hits to the company came from carried interest declines, but if the markets rebound, those numbers should climb with them.

KKR shareholders were generally happy with the results, and KKR unit prices rose 3% on Thursday following the announcement. With a key decision behind it, KKR can go back to focusing on making the most of market conditions to find superior investment performance for its clients.