Please ensure Javascript is enabled for purposes of website accessibility
Log In Help Join The Motley Fool
Free Article Join Over 1 Million Premium Members And Get More In-Depth Stock Guidance and Research
By Daniel Miller – Updated May 3, 2018 at 7:08AM

Ford's April sales told us something we already knew: Car sales are struggling. They also told us that a recent decision isn't as crazy as we thought.

Ford Motor Company (F -0.67%) investors had plenty to digest after management announced it would stop selling all of its passenger cars in the U.S. market, except for the Mustang and new version of the Focus. Whether you agree with the decision or are apprehensive about the new strategy, Ford's April sales results reinforce what we should already know: Fewer and fewer people want cars. But it might also tell us something more.

Ford sold more than 204,000 units in the U.S. last month, a 4.7% decline compared to the prior year, thanks to another plunge in its car segment. Ford brand car sales dropped nearly 14% last month, to just under 40,000 units.

Ford's best-selling passenger car year to date, the Fusion, dropped a significant 22.9% compared to the prior year, and only one Ford brand car posted a year-over-year gain -- and that was the GT, which sold a grand total of 10 units. To put Ford's dwindling car sales in another light, the F-Series trucks alone sold more than 73,000 units.

The industry continues to operate at historically strong levels. We are seeing this with our F-Series trucks, which have now posted 12 consecutive months of year-over-year gains. The market continues to strongly favor well-equipped SUVs and trucks and our F-Series and new Expedition and Lincoln Navigator are capitalizing on this generational shift.

If Ford is going to pin its future vehicle portfolio on anything, it might as well be SUVs and trucks. That's what the company does best, and those products are healthier for the top and bottom lines. In fact, as passenger-car sales shrink and consumers move to bigger vehicles, Ford's overall transaction prices were nearly $4,000 higher than the industry average in April. 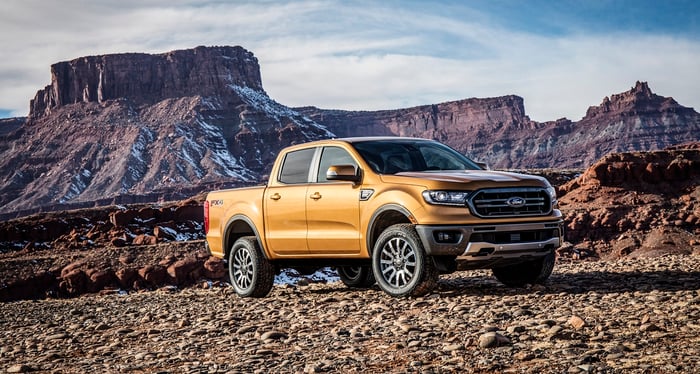 Management expects the move away from cars will enable light trucks to generate roughly 90% of its North American sales as soon as 2020. When you combine that sales mix with the $25.5 billion in cost savings Ford plans to create by 2022, it's an intriguing story to hand Wall Street -- the same Wall Street that has long loathed the capital intensive and cyclical nature of the automotive industry.

Further, UBS analyst Colin Langan estimates that the folks at the Blue Oval lose $800 million annually selling small cars in North America. And while passenger cars certainly are less lucrative for Ford, if not downright value destroying, some investors are worried that dropping so many cars could be a mistake.

It's possible consumers won't remain as loyal to the Ford brand as it drops lower-priced options. It's also possible the removal of so many cars opens the door for new competitors, perhaps Chinese automakers that have been eyeballing an entry into the U.S. market.

In April, as Ford's car sales slumped again, the F-Series posted its best April result in 18 years, the EcoSport had its best monthly sales to date, retail sales of the Lincoln Navigator exploded 135% higher, and retail sales of the Expedition increased nearly 26%. But for all the risks Ford faces dropping most of its cars in the U.S., April results told us the decision might not be as crazy as people think.