Please ensure Javascript is enabled for purposes of website accessibility
Log In Help Join The Motley Fool
Free Article Join Over 1 Million Premium Members And Get More In-Depth Stock Guidance and Research
By Isaac Pino, CPA - Updated May 4, 2018 at 4:06PM

Here's what to make of Autodesk's makeover.

It's odd what's happening at Autodesk (ADSK -3.43%). Since the beginning of 2015, sales and earnings at the the design-software maker have steadily declined, and yet its stock price has surged. Shares have more than doubled, up 121% over that time frame.

All the while, sales have trended down. From 2015 to 2018, sales declined by 18.4%. And profits have been nonexistent in that time frame, declining from a loss of $282 million to a loss of $567 million. If it sounds inconsistent with what you might expect, well, it looks that way, too: 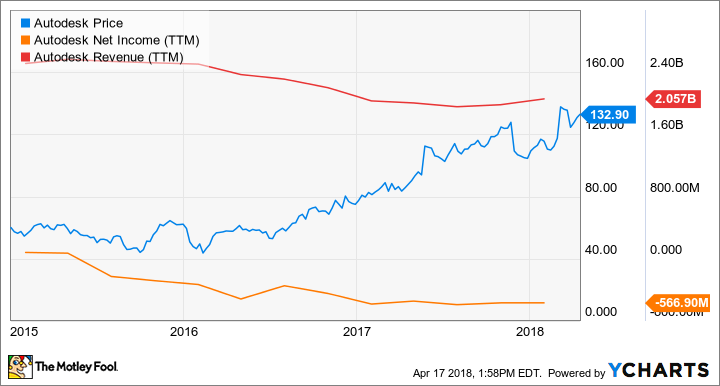 So what's going on? Why are investors willing to pay up as sales and earnings slip?

The answer boils down to Autodesk's business model. Behind the scenes, the company is undergoing a transformation that's only evident when you dig into the 10-K, listen in on conference calls, and sort through its changing revenue mix. All three sources reveal dramatic changes to the way it sells and delivers products to customers. And this transformation is having a profound effect on how the market views the company. A switch to subscriptions

Back in 2014, Autodesk suggested that the following few years would be less fruitful for the company from a financial perspective. It wasn't something that was splashed on the front page of the annual letter to shareholders. Instead, the note appeared on page 40 of the annual report. It read as follows:

Autodesk's business model is evolving. We continue to assess current business offerings including introducing more flexible license and service offerings that have ratable revenue streams. The accounting impact of these offerings and other business decisions are expected to result in an increase in the percentage of our ratable revenue, making for a more predictable business over time, while correspondingly reducing our upfront perpetual revenue stream. Over time, we expect our business model transition to expand our customer base by eliminating higher up-front licensing costs and providing more flexibility with how customers use our products. However, we expect the business model transition to cause our traditional upfront perpetual license revenue to decline without a corresponding decrease in expenses. In the future, we expect this business model transition will increase our long-term revenue growth rate by increasing the annual value per subscription and increasing our subscription base over time.

This all meant big changes for the company.

This brief disclosure, as you can see, would have significant implications.

In 2014, Autodesk started accelerating the shift. First, it rethought how it delivered licenses to make them more flexible for project-based users and small businesses. This was a stopgap that accommodated the new "on-demand" mindset and reduced the sticker price for customers. But it didn't stop there.

The company started marketing and persuading large design companies to switch to a new contract and method of product delivery. By 2016, Autodesk was disclosing sales of subscriptions versus license and maintenance revenue. Subscriptions stood at $228 million in 2016, and they more than quadrupled to $989 million over the next two years. Meanwhile, maintenance and licensing revenues have decreased by 16% and 551%, respectively, during the same time period.

On the investor relations front, management increased transparency around the changes. In its annual reports, for instance, Autodesk went from mentioning the word "subscription" three times in 2013 to 41 times in 2015 to a staggering 99 times by 2016. The revenue shift was evident, and the company was going all in on messaging to the market.

Meanwhile, outside the company, investors were starting to grasp the effects of this transition, which was also happening at other software companies, like design competitor Adobe and accounting software maker Intuit. The slowdown in sales, though disappointing, could actually indicate rosier prospects for the long run. After Autodesk's stock stumbled in 2015 (as shown above), it started to reverse course in a big way in 2016.

Ultimately, the market has embraced the business model. As befuddling as it may sound, sales were sliding, but each dollar of sales is demanding a greater premium with each passing year.

The price-to-sales ratio is the best indicator of the premium that Autodesk stock fetches. In 2013, every dollar of Autodesk's sales was valued at $3.60 by the market. That figure increased by 53% through 2016 and by 283% through the most recent 12 months: 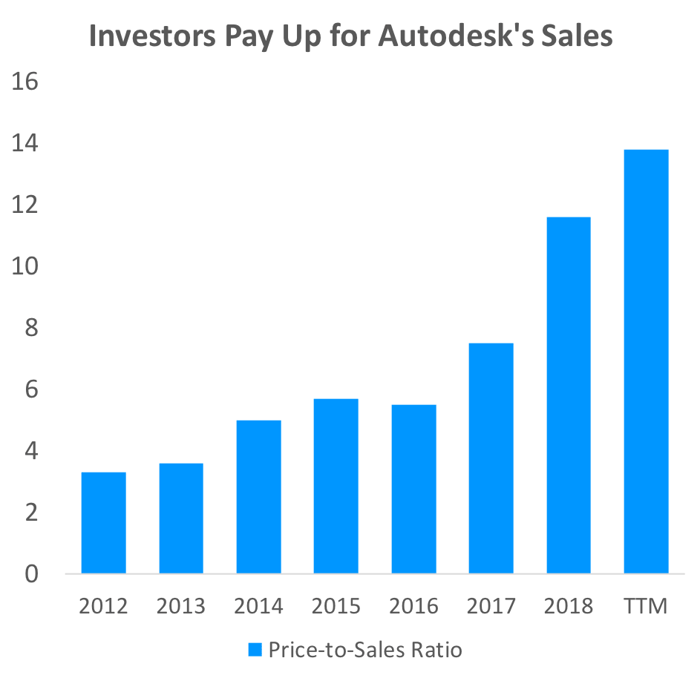 Growth of that magnitude cannot be attributed solely to an overall pricey market. This feat is unique to Autodesk, and it's propelled by the market's embrace of this new business model.

Recurring revenue, as you may guess, means Autodesk has greater visibility into its sales cycle than if it started from scratch each quarter selling new licenses. The market appreciates this predictability. It also appreciates that customers tend to be more "sticky" in this model because their switching costs increase. Once customers have adopted Autodesk to suit their needs, they're less inclined to go through the headaches of moving to another provider.

And, finally, Autodesk's product -- software -- has the potential to become easier to deliver and to create a shorter feedback loop via the cloud between the end user and the company. This means the company can save on costs and get better at satisfying the desires of its customers.

These are the reasons the market's bidding up shares: more predictability, "stickier" customer relationships, and a more direct model of distribution.

Sales didn't slide due to declining demand or an inferior product. Autodesk has a unique product in industries that are embracing technology more and more, like construction, manufacturing, and engineering. Sales slid because Autodesk overhauled its approach to selling its software, and therefore recognized less of the revenue at the outset of the sale. In the long run, this change in business model will be better for investors.

Meanwhile, Autodesk showed signs the sales trend is reversing just last month. Sales were up from $1.98 billion to $2.06 billion year over year. This transformation could very well be at the tipping point.