Please ensure Javascript is enabled for purposes of website accessibility
Log In Help Join The Motley Fool
Free Article Join Over 1 Million Premium Members And Get More In-Depth Stock Guidance and Research
By Steve Symington - May 3, 2018 at 2:29PM

The wearable tech company delivered as promised in the first quarter, but guidance left the market underwhelmed.

Shares of Fitbit Inc. (FIT) were down 10.2% as of 2 p.m. EDT Thursday after the wearable technology specialist delivered slightly better-than-expected first-quarter 2018 results, but followed with disappointing forward guidance.

Fitbit's quarterly revenue declined 17.1% year over year to $247.9 million, which translated to an adjusted (non-GAAP) net loss of $41 million, or $0.17 per share. For perspective, those results compare favorably to Fitbit's latest guidance, which called for a slightly wider quarterly net loss of $0.18 to $0.21 per share on revenue in the range of $240 million to $255 million. 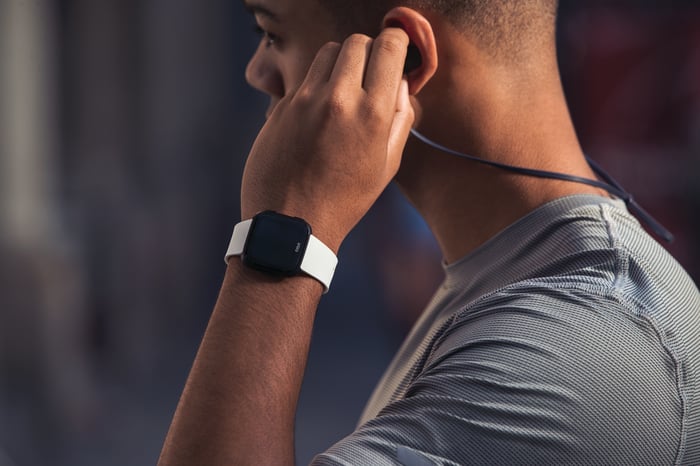 "We made important progress in the transformation of our business in the first quarter as we continue to adapt to the changing wearables market," stated Fitbit co-founder and CEO, James Park. "Early sell through of Fitbit Versa, our first true mass appeal smartwatch, has been the best in our company's history, positioning us to expand our user base and capture greater share of the fast-growing smartwatch market," said Park.

Park also highlighted Fitbit's investments in new software and services to help its customers "achieve better health outcomes," including the company's acquisition of Twine Health during the quarter, as well as a long-term collaboration with Google aimed at accelerating innovation in the space.

For the second quarter, however, Fitbit expects revenue will fall 19% year over year to a range of $275 million to $295 million, which should translate to an adjusted net loss per share of $0.23 to $0.27. Both figures sit well below consensus estimates, which had predicted a narrower loss of $0.10 per share on revenue of $314.2 million.

Even so, Fitbit reiterated its guidance for full-year 2018 revenue of roughly $1.5 billion, assuming smartwatch sales comprise the majority of revenue by the second half of the year. But given Fitbit's persistent losses as it struggles to return to sustained, profitable growth, it's obvious the market wanted more. And it's no surprise to see Wall Street taking a step back today.