Please ensure Javascript is enabled for purposes of website accessibility
Log In Help Join The Motley Fool
Free Article Join Over 1 Million Premium Members And Get More In-Depth Stock Guidance and Research
By Brian Stoffel - May 4, 2018 at 10:52AM

Investors need to understand the changes coming as Grand Canyon University splits off a non-profit entity.

To say that Grand Canyon Education (LOPE) is an enigma is an understatement. Over the past 10 years, for-profit colleges and universities have been lambasted, and shares in the industry have suffered mightily. It all started with an undercover Government Accountability Office investigation that demonstrated predatory behaviors among recruiters and snowballed from there.

But Grand Canyon has forged a very different path. The school -- which started out as a non-profit and only made the switch to for-profit in 2004 to help with financial troubles -- has spent a ton of money on its physical campus to go along with online offerings. It also has a very popular Division I athletics program -- the first of its kind for for-profit schools.

Perhaps that helps explain why, in this age when for-profits seem to be flailing, Grand Canyon is adding students and cash to its bottom line. This week's earnings report indicated more of the same for the school, though enormous changes are on the horizon. 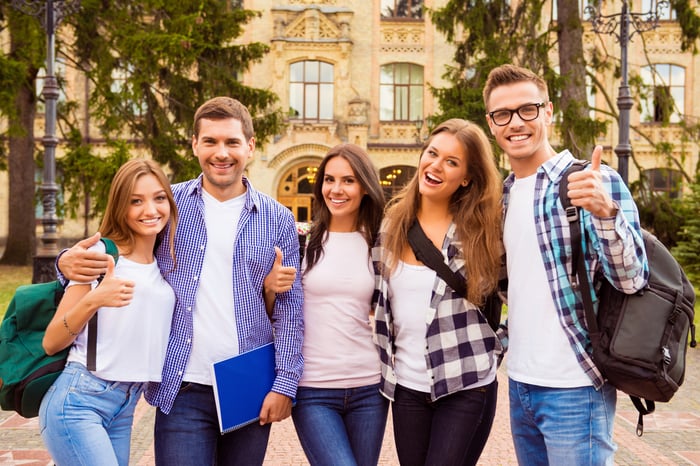 Before we dig into those huge changes, let's take a look at how the school performed on the headline metrics.

It's worth pointing out that the fall in free cash flow was to be expected. Grand Canyon is still investing heavily in on-campus projects. This quarter, that included money put toward two new residence halls, one classroom building, a parking garage, and computer equipment and software costs for the online section of the school.

The real story is the impressive growth in profitability. While revenue was up 11%, operational expenses jumped just 8%. The company spent less of its revenue on instructional costs, admissions, advertising, and marketing than it did last year. That's important, because all but the first of those divisions will be part of the new Grand Canyon Education -- which will not include the actual university -- after the split occurs in the near future (more on that below).

Just as important, enrollment numbers remained strong across the board.

The coming change to non-profit status

But while all this is good news for the current state of the company, it's important to understand the coming split between Grand Canyon Education (GCE, a for-profit services company) and Grand Canyon University (GCU, a non-profit school). While current shareholders have access to the former, they will no longer hold a direct stake in the latter.

The details are being hammered out, but the school expects to receive guidance or approval from the U.S. Department of Education by the end of May, and plans on sharing exactly how the split will occur within the next two months. Thus far, the details are as follows.

It is expected that the two entities will sign a 15-year contract with hefty fees if it is exited early. The contract will allow GCE to earn about 60% of revenues from GCU for providing the above-mentioned services.

But, as CEO Brian Mueller pointed out in the company's conference call, GCE will be allowed to provide services for other schools as well. When asked how quickly GCE would expand its role beyond just providing services for GCU, here's what he had to say:

... what we want to figure out is what our role should be in that whole market. It's going to be very different than most because we have a customer already that has 90,000 students. And so the role that we play in the marketplace is going to reflect a positioning that takes that into account. And so when the thing gets done, we'll take 3 to 6 months and talk to people and figure out what our position should be, and then we'll move in to it on a gradual basis. But we have a tremendous advantage because we've got a customer that's got 90,000 students, it's producing 30-plus percent of margins, which is going to put us in a lead role in this thing right away and allow us to be very selective in terms of who we bring on.

Based on stronger-than-expected results from the first quarter, management also updated its guidance for the rest of the year. Revenue is expected to now come in at $1.055 billion with earnings of $4.82 per share. That represents healthy growth of 8% and 21%, respectively.