Please ensure Javascript is enabled for purposes of website accessibility
Log In Help Join The Motley Fool
Free Article Join Over 1 Million Premium Members And Get More In-Depth Stock Guidance and Research
By Anders Bylund – May 4, 2018 at 4:03PM

The ticket wrangler and event organizer is firing on all cylinders, with nearly 20% year-over-year growth in each of its three business segments.

In a seasonally slow period, Live Nation grew its first-quarter concert list 22% year over year to land nearly 7,000 shows. The Ticketmaster division reached nearly 60 million fans between January and April, a 30% increase over the year-ago period's 46 million ticket-buying customers. The growth was broad-based, as all three of Live Nation's reportable business segments landed revenue and operating income growth within a range of 16% to 20%.

A redesigned ticket-buying process helped Live Nation increase its mobile ticket orders by 36%, and this platform now accounts for nearly 40% of total ticket sales. A year ago, the company didn't even mention its mobile app in that first-quarter report.

The company managed $8.2 billion of global gross value through its ticketing services, a 12% year-over-year boost. The gross value continued to rise faster than the raw number of ticket sales, as Ticketmaster aims to increase its take-home share of each ticket sold. 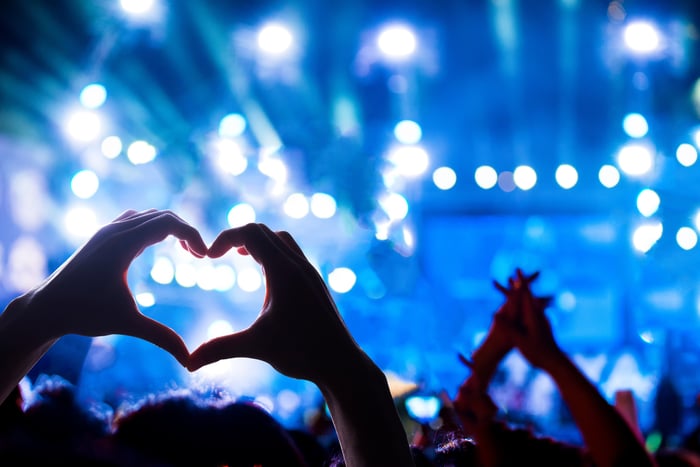 On a conference call with financial analysts, Live Nation CEO Michael Rapino explained how the hot-off-the-presses acquisition of rights to the Rock in Rio festival should form the starting point for a growth strategy in South America:

We tend to find an access point, either a promoter, existing promoting business or a historic festival which is attached to usually a great operator. Rock in Rio, one of the greatest festivals in the world, so good credible jump to our Brazilian business. And that will now be a real beacon for building around our Brazil and into the other South American markets. ... Over the last couple of years, we've been putting lots of Metallica and Coldplay, U2 stadium tours throughout the region. So we've got great partners, great experience. Now we're going to turn that, with Rock in Rio, turn it into actual Live Nation businesses down there.

This will be the start.

The next Rock in Rio Lisboa event is slated for the end of June. Headliners Bruno Mars, Katy Perry, Muse, and The Killers will hit the stage in Portugal, and that event sold out in March. The next Rio-based extravaganza is planned for the summer of 2019, giving Live Nation its first taste of running this marquee event that typically attracts more than a million attendees.

Going forward, festivals and amphitheater events form the core of Live Nation's overall strategy. These shows tend to support better marketing and higher sales of on-site products such as food and band-related souvenirs, which lead to higher profit margins for Live Nation. Therefore, expanding this show category should lead to higher profit margins overall. Of course, amphitheaters and festivals are also more exposed to seasons and weather effects, so Live Nation's seasonality swings should be amplified as this strategy matures.

Live Nation has plenty of irons in the fire right now. The sponsorship and advertising division has already booked 80% of the available inventory for the full year. Ticketmaster's verified fan program, where concertgoers can sign up for presale codes for their favorite artists, is expanding and boosting the company's customer loyalty. This fall, a new partnership with the NFL begins.

For the rest of 2018, management expects year-over-year growth in adjusted operating income to stay fairly consistent. That metric stood at 24% in this first-quarter report.