Please ensure Javascript is enabled for purposes of website accessibility
Log In Help Join The Motley Fool
Free Article Join Over 1 Million Premium Members And Get More In-Depth Stock Guidance and Research
By Rich Smith - May 4, 2018 at 11:56AM

But this investor disagrees.

Pandora Media (P) stock is on a tear.

After reporting earnings Thursday, Pandora shares soared 20% in early trading Friday. Wall Street bankers are scrambling to jump on the bandwagon, with at least two analysts so far rushing out new buy ratings on the stock, and a third doubling down, according to reports on TheFly.com.

What's got the Street so excited about Pandora -- and are the bankers right to recommend it? Read on and find out. 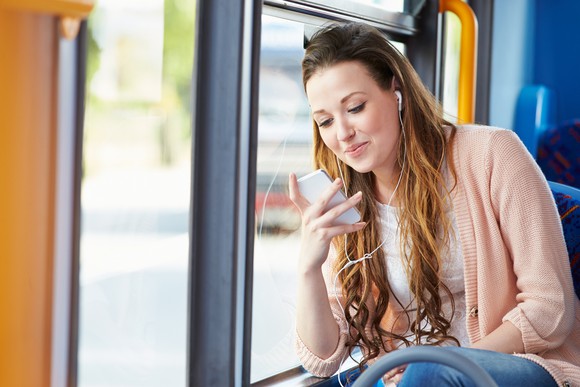 Let's first give you a quick rundown of the results. Yesterday, Pandora Media reported its financial results for fiscal Q1 2018. Pandora reported $0.55 per share in GAAP losses for the quarter on a mere 1% increase in revenue. (Pandora shut down its service in Australia and New Zealand, and sold its TicketFly unit, which hurt sales in the quarter. Its continuing operations grew 12% year over year.)

Non-GAAP EPS was $0.11 better than Wall Street had expected, and Pandora's sales -- $319.2 million -- were $15 million ahead of estimates. Pandora's per-share GAAP loss was also $0.01 slimmer than what it lost in the year-ago quarter.

So far, TheFly.com reports that three analysts have chimed in on Pandora's results: B.Riley/FBR and SunTrust, both of which upgraded the stock to buy, and Canaccord Genuity, which reiterated its existing buy rating and raised its price target on the stock to $8 a share.

Here's what they had to say:

Speaking of that slide, though, let's address it. Pandora reported that "total listener hours" on its service "were 4.96 billion for the first quarter of 2018, compared to 5.21 billion for the same period of the prior year." That's a 5% decline in listenership. "Active listeners" declined even faster, down 6% year over year to 72.3 million.

(The number of paid Pandora Plus and Premium subscribers was 5.63 million -- about 7.8% of all active listeners on the service. Management says it grew in the quarter, but did not detail how much.)

Nor did management give guidance in its earnings report as it did last year. Instead, it revealed this news only on its post-earnings conference call, advising that it is aiming to book $360 million to $375 million in Q2 revenue this quarter. (At the midpoint, that's below Wall Street estimates.) Management also admitted that its EBITDA will probably run negative this quarter, and its cash reserves will decline -- suggesting a reversion to negative free cash flow.

Analysts may be right about Pandora earning positive EBITDA in 2019, or analysts may be wrong. The only thing that seems certain is that Pandora is not there yet, and won't be next quarter, either. Also, although Pandora stopped its cash burn in Q1, it looks like cash will resume smoldering in Q2.

Over the past 12 months, by the way, Pandora has consumed a total of $174.5 million in cash burn, according to data from S&P Global Market Intelligence. And despite the positive mentions on Wall Street today, most analysts still predict that Pandora will post negative GAAP earnings at least through 2022, and remain free-cash-flow negative through 2020.

If you ask me, that's a long time to wait to see if Pandora can turn profitable -- especially since all along the way, it must contend with rivals such as Sirius XM, Spotify, and Apple as they fine-tune their own music services and try to drive Pandora into the ground.

Wall Street may think Pandora is a buy today. Some investors may be optimistic about the company's prospects -- but I am not one of them.