Please ensure Javascript is enabled for purposes of website accessibility
Log In Help Join The Motley Fool
Free Article Join Over 1 Million Premium Members And Get More In-Depth Stock Guidance and Research
By Matthew DiLallo - Updated May 4, 2018 at 3:55PM

While Crestwood Equity Partners (CEQP -2.65%) isn't a well-known name, it should be, especially by income-seeking investors. That's because the high-yielding master limited partnership (MLP) offers an increasingly compelling combination of current income and future upside backed by strong financial metrics and clearly visible growth prospects. The company's strong core and upside potential was on full display during the first quarter, which once again showed that this is an excellent income stock to own for the long haul.

Crestwood Equity Partners worked hard to turn around its business over the past few years after finding itself in a tight spot when oil prices started crashing. Those efforts are beginning to pay off, as evidenced by its first-quarter results: 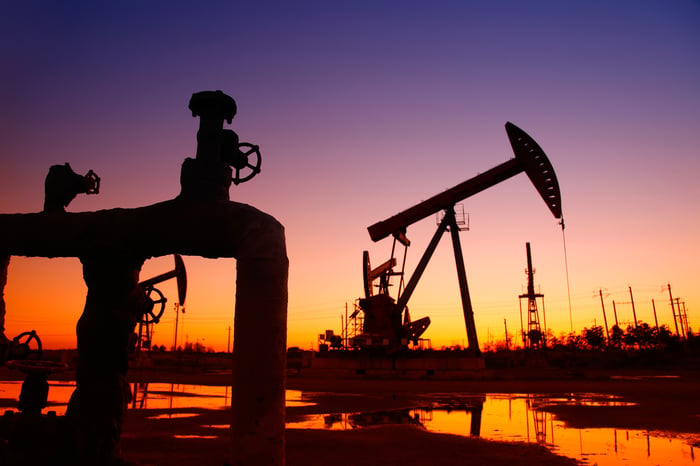 As that chart shows, Crestwood's underlying earnings improved nearly 12% versus the year-ago period, which is impressive considering that the company recently sold its U.S. Salt business to give it more cash to finance additional growth projects. The company more than made up for that lost income by capturing higher volumes on its legacy systems and benefiting from recently completed expansion projects.

While distributable cash flow declined during the quarter, that's a bit deceiving. That's because Crestwood issued preferred units last year to help finance some of its expansion projects. As a result, the company paid those investors out of its cash flow, which cut into the money it could have distributed to common unitholders, though it still generated enough to cover its 8.5%-yielding payout by a comfortable 1.25 times. Further, if we adjust for the payments to preferred investors, distributable cash flow would have increased 13.4% year over year.

Driving the improvement in earnings was Crestwood's gathering and processing (G&P) segment. 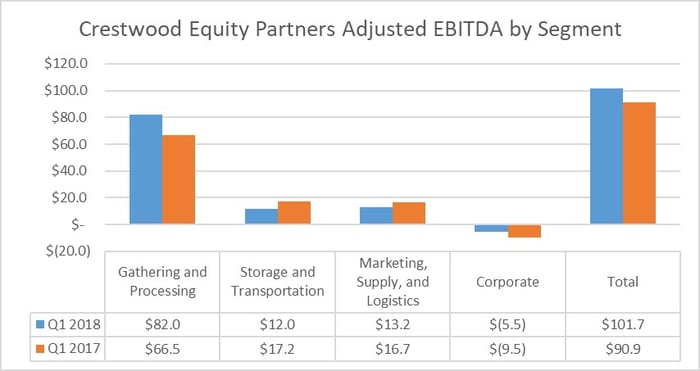 Data source: Crestwood Equity Partners. Chart by the author. In millions of dollars.

Overall, G&P earnings leaped 23% versus the year-ago quarter thanks to a big uptick in volumes across Crestwood's systems in the Bakken, Delaware Basin, Powder River Basin, and southwest Marcellus. The company saw a 32% improvement in gas processing volumes, and 17% increases in both oil and natural gas volumes gathered. Expansion projects helped drive this growth, including finishing the Nautilus gathering system in the Delaware Basin last June and recent growth projects on the Arrowhead system in the Bakken.

Partially offsetting this growth were weaker results in the company's storage and transportation (S&T) business as well as its marketing, supply, and logistics segment. S&T declined mainly because of lower oil volumes by rail at its COLT Hub, which more than offset a 10% increase in gas volumes flowing through its Stagecoach joint venture with Consolidated Edison (ED -4.68%). Meanwhile, earnings from marketing, supply, and logistics declined mostly because of the sale of the U.S. Salt business.

While Crestwood's first-quarter results were good, the future looks even better because the company has several expansion projects under way that should enter service in the coming quarters. CEO Robert Phillips ran through the list, stating:

By the end of the second quarter we expect to place our Orla Express Pipeline and Orla Processing Plant in-service in the Delaware Basin, where Willow Lake volumes have been running near capacity and six rigs are currently active on our Nautilus system. By the end of the third quarter, we will be completing the 2018 Arrow debottlenecking projects increasing oil, gas and water capacity in the Bakken. By the end of the fourth quarter, we anticipate completing the next phase of Jackalope processing and system expansions to support near-term rising volume forecasts in the Powder River Basin.

In addition to the cash flow growth from these projects, the company's S&T segment will benefit from a 5% cash distribution step-up from its Stagecoach joint venture with Consolidated Edison in the third quarter. Because of these factors, Phillips stated the company "will begin to materially grow Adjusted EBITDA and distributable cash flow in the second half of 2018 and full-year 2019."

That high-octane growth will provide even more support for the company's lucrative distribution while further improving a balance sheet that already boasts a comfortable 3.9 times leverage ratio. The upcoming improvement in cash flow gives the company several options for creating additional value for investors in the coming years, including investing in more high-return expansions, increasing its distribution, paying down debt, or even repurchasing some of its common or preferred equity. Those options position the company to "drive meaningful total returns for our unitholders over the next few years," according to Phillips, which makes Crestwood a very compelling income stock for investors to consider buying.