Please ensure Javascript is enabled for purposes of website accessibility
Log In Help Join The Motley Fool
Free Article Join Over 1 Million Premium Members And Get More In-Depth Stock Guidance and Research
By Jeremy Bowman – May 5, 2018 at 6:17AM

Shares are down double-digits for the year, but fears are overblown.

It's not so easy to size up Walmart (WMT -2.50%) these days. For decades, the retailer's strategy was as reliable as the sunrise: Open up hundreds of supercenters every year, keep costs low, and offer customers "everyday low prices."

For a long time, that strategy drove consistent profit growth and propelled the big-box chain to retail dominance, but like many things in business, it worked until it didn't. The rise of Amazon (AMZN -3.01%) and e-commerce disrupted Walmart's leadership and undermined the strength of both its pricing strategy and brick-and-mortar expansion.

Under CEO Doug McMillon, who took the helm in 2014, Walmart has reinvented itself. The retailer has essentially stopped opening new stores, instead investing that capital into paying employees better, providing more training, cleaning up stores, and eliminating out-of-stockages -- all in an effort to improve the in-store experience. The company has also aggressively pivoted to e-commerce, quickly adding grocery pickup stations at its stores, expecting to have more than 2,000 of them by the end of this year. It boosted its exposure to e-commerce by acquiring Jet.com for $3.3 billion and followed that up with smaller e-commerce acquisitions like Bonobos and Modcloth.

In other words, Walmart is staking its future on e-commerce, omnichannel, and better-run stores. That strategy paid off last year as the stock jumped 43%, but after a weak fourth-quarter earnings report in February and slowing e-commerce growth, the stock plunged as investor fears about the competitive landscape returned. Walmart stock has remained down since then, off 12% year to date, indicating that the bears' fears remain. However, there are still a number of factors working in the company's favor. Let's take a look at a few of them. 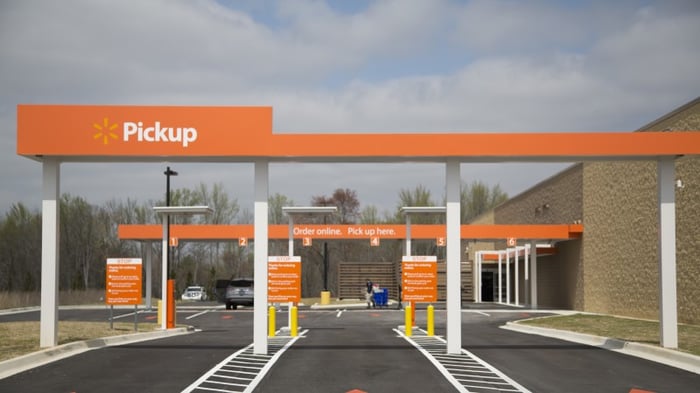 1. Growth is still on track

Walmart stock plunged on its fourth-quarter earnings report as U.S. e-commerce growth suddenly slowed to 23% from 50% in the previous quarter. That deceleration took investors by surprise, and the company blamed it in part on lapping the acquisition of Jet.com and on operational problems. However, there were plenty of positive signs in the quarter. Two-year comparable sales improved to 4.4%, the company's best mark in eight years, as one-year comps were up 2.6% in the quarter, following 1.8% growth the year before. Sam's Club was also seeing impressive growth, with comps up 2.8%.

Both results show that Walmart's investments in its stores have paid off. Looking ahead, the company still expects U.S. e-commerce growth of 40% in the current year, driven by the expansion of its online grocery program. It also sees earnings-per-share growth returning with the help of tax reform, eyeing a range of $4.75 to $5.00 this year, up from $4.42. For the current fiscal year, it's calling for 2% comparable sales growth at Walmart U.S. stores. Assuming the company can hit those targets, there is little reason to question its growth strategy. The stock also looks cheap, trading at a P/E ratio of less than 18 based on the high end of that range.

Optionality is the potential of companies to deliver growth in unexpected ways, through things like acquisitions, new technologies, or new business lines. While the concept is generally applied to growth companies like Amazon, more mature companies like Walmart can also take advantage of it, much as it did with its acquisition of Jet.com. Walmart appears set to strike such a deal again as it's reported to be in talks to acquire health insurer Humana and to take a majority stake in Flipkart, the leading e-commerce operator in India.

While we don't know yet if either of these deals will go through, it shows that Walmart is focused on expanding its business outside of its traditional base in brick-and-mortar U.S. retail. As one of the world's largest employers, Walmart could likely add scale and efficiency to an insurer like Humana as well as bundle its services into its stores, as Walmart already has pharmacies in many of its stores. India is one of the fastest-growing e-commerce markets where rival Amazon has invested billions. Taking a majority stake in Flipkart, which would cost Walmart around $10 billion, would give it a valuable position in the growth market, and again, Walmart's scale and retail expertise would benefit Flipkart's growth.

The company has made similar moves to partner with e-commerce companies in foreign markets, investing in China's JD.com and forming a strategic alliance with Rakuten in Japan.

Walmart rose to prominence by blanketing rural and suburban America with superstores and offering low prices and a wide selection. While competitors like Costco Wholesale and Amazon have taken share from Walmart with similar strategies, Walmart is still in a better position than most retailers to compete in the changing retail landscape. The chain claims to have a store within ten miles of 90% of the U.S. population, giving it an edge for fast delivery, or to beckon customers to stores to pick up goods they've ordered online. It also has one of the biggest private trucking fleets in the country, which should help aid deliveries. Last year, the company introduced free two-day delivery for orders over $35, a program designed to counter Amazon Prime.

Similarly, Walmart's massive size gives it a cost advantage and sway with brands as it's often the biggest customer for many of its vendors. As other retailers like Bed, Bath & Beyond and Sears Holding struggle and lose customers, Walmart, with its ubiquity, wide selection, and low prices, is in an excellent position to grab those sales. Even with intense competition from Amazon, the chain is still one of the strongest brick-and-mortar retailers out there.

Investors may be nervous after the most recent quarterly report, but I'd bet it was probably just a blip. Management is making smart strategic moves for the long term, and e-commerce sales should bounce back with the expansion of the online grocery program. I'd expect shares to recover over the course of the year.