Please ensure Javascript is enabled for purposes of website accessibility
Log In Help Join The Motley Fool
Free Article Join Over 1 Million Premium Members And Get More In-Depth Stock Guidance and Research
By Dan Caplinger - May 7, 2018 at 3:11PM

Find out what you give up when you ignore small companies.

Investing in the stock market is risky, and investors who aren't comfortable with that risk often choose the big-name corporate giants that they know and love in their daily lives. The 30 stocks in the Dow Jones Industrial Average are all behemoths that have been successful for years, and although even the longest-lived companies go through challenges, it's a lot rarer for them to go out of business than smaller companies that you might never even have heard of before.

Yet when it comes to investing, reward often comes from being willing to take on risk. Over the past 10 years, investors who've been willing to look at smaller companies have seen much stronger returns than those who've stuck with the tried-and-true big names that are more familiar to them. When you look at exchange-traded funds tracking indexes composed of companies of different sizes -- SPDR S&P 500 (SPY 3.18%) for large companies, SPDR S&P Midcap 400 (MDY 3.50%) for midsize companies, and SPDR S&P SmallCap 600 (SLY 2.96%) for small companies -- you can put a number on just how much better smaller stocks have done: 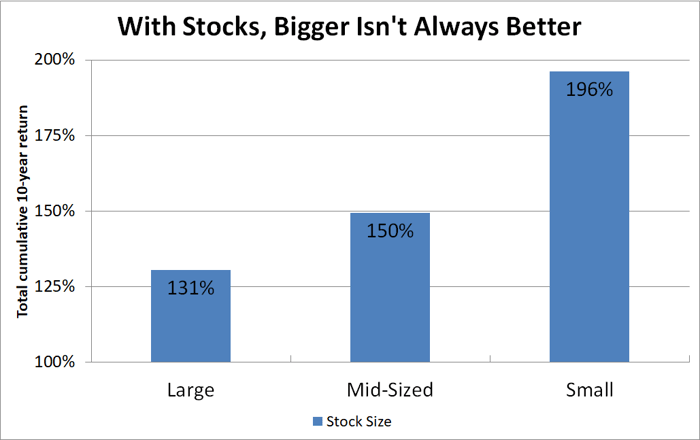 Over shorter periods of time, these relationships don't always hold true. The stocks of large companies go in and out of favor compared to their smaller rivals, and there are times when big companies have an edge. For instance, smaller companies are less likely to have international operations than the giants of industry with multinational scope, and so when the U.S. economy is underperforming compared to the rest of the world, large companies that can take advantage of foreign markets more easily do better.

The long-term value proposition of the stocks of small companies, however, has borne itself out over time. Yet many investors largely ignore smaller companies when they think about investing. Putting all your money in them can involve too much risk, but the right balance of big, midsize, and smaller companies can help you enhance your overall returns while still leaving you comfortable with your portfolio as a whole.