Please ensure Javascript is enabled for purposes of website accessibility
Log In Help Join The Motley Fool
Free Article Join Over 1 Million Premium Members And Get More In-Depth Stock Guidance and Research
By Adam Levine-Weinberg – May 8, 2018 at 6:35AM

General Motors stock has fallen more than 20% since last October, even though the company remains on pace to produce record earnings next year.

Late last month, General Motors (GM -3.52%) reported solid first-quarter earnings. Adjusted earnings per share declined on a year-over-year basis (from $1.75 to $1.43) but still surpassed the average analyst estimate of $1.24. Moreover, management confirmed that earnings trends are set to improve later this year and into 2019.

Nonetheless, General Motors stock -- which had already been struggling in 2018 -- continued to decline following the earnings report. The stock is now more than 20% below its 52-week high and trades for less than six times earnings. 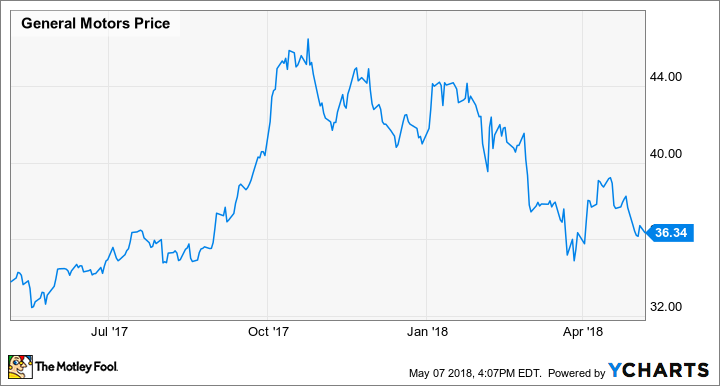 Investors and analysts seem to be overreacting to the potential headwinds GM may face from global trade tensions, while underestimating the benefits from the company's profit growth initiatives. As a result, General Motors stock has lots of upside if management can execute on its strategic initiatives.

GM's earnings decline last quarter was driven entirely by lower profitability in North America. Adjusted operating profit in that region fell by more than a third on a year-over-year basis, from $3.5 billion to $2.2 billion, on a 5.2% revenue decline.

Crucially, this sales decline wasn't driven by weak demand. For all of North America, GM's total sales to end customers reached approximately 827,000 units, up from 816,000 a year earlier. However, automakers report revenue (and earnings) based on wholesale results (sales to dealers).

Vehicle wholesales for North America fell to approximately 893,000 units last quarter from 940,000 in the prior-year period. In other words, there was a much smaller seasonal increase in dealer inventory this year compared to the first quarter of 2017.

This change was planned. Last year, GM was deliberately increasing dealer inventory during the first quarter to support new crossover models it was launching, particularly the Chevy Equinox. By contrast, it produced fewer full-size trucks last quarter because of downtime related to the launch of its next-generation truck models later this year. This downtime had a particularly big impact on profitability, because full-size trucks are so lucrative. 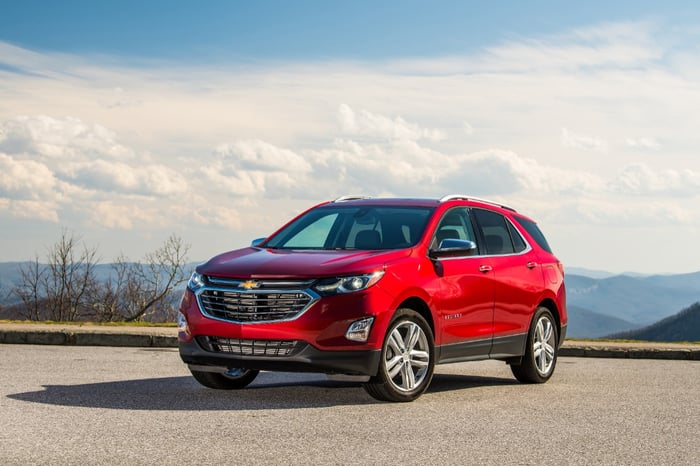 Looking ahead, the next big chunk of planned downtime for GM's truck plants will come in the fourth quarter. As a result, General Motors is likely to post strong earnings results in Q2 and Q3. GM expects full-year adjusted EPS to be roughly in line with last year's $6.62.

While earnings trends in North America are set to improve going forward, GM could also get an earnings boost from its international operations. In recent years, most of the General's operations outside of North America and China have been unprofitable. (For example, excluding China, GM's international region posted an operating loss of approximately $651 million in 2017.) This has hurt General Motors' stock performance.

That said, GM's performance in South America is steadily improving thanks to the company's cost cuts and better macroeconomic conditions. The biggest thing still weighing down General Motors is its GM Korea subsidiary.

Fortunately, GM recently reached a last-minute deal to save its South Korean unit. By closing its Gunsan manufacturing plant and restructuring its labor contracts, GM Korea expects to achieve annualized cost savings of $400 million to $500 million by the second half of 2018. Furthermore, new product launches will help improve utilization of the remaining factories over the next few years. As a result, management expects to earn respectable returns on its investments in South Korea going forward.

2019 could be a spectacular year

On average, Wall Street analysts expect GM's 2019 earnings per share to be roughly in line with its 2017 and 2018 results. That seems overly pessimistic.

First, General Motors will benefit from higher truck production -- and an improved product mix -- in North America during 2019. Second, it is continuing to expand its lineup of crossovers, which carry higher margins than cars. Third, GM expects a meaningful improvement in its international profitability next year. Fourth, GM's captive finance unit (GM Financial) is steadily gaining scale, which is driving improved profitability.

Thus, GM has more than enough 2019 earnings catalysts to offset potential headwinds like higher commodity costs, or another decline in U.S. auto sales. It could see further gains in 2020 as it continues refreshing its full-size truck and SUV portfolio and rolls out its new low-cost vehicle architecture for emerging markets. With EPS likely to move higher in 2019 and 2020, General Motors stock could surge to new heights.