Ever since domestic auto sales growth began to tail off a couple of years ago, many investors have been expecting U.S. automakers' profitability to plunge. To some extent, that has happened at Ford Motor (F 1.71%). Ford reported disappointing results in 2017 and doesn't expect 2018 to be any better.

Another successful month for the General

GM ended 2017 on a strong note, with retail sales up 1.8% year over year in December. (Total deliveries declined 3.3%, but that was due to a decision to cut back on lower-margin sales to rental car companies.) General Motors' four major pickup models were the main drivers of this rock-solid sales performance.

However, Chevy's new crossovers were the real stars of January. Last year, GM introduced all-new versions of its high-volume Chevy Equinox and Chevy Traverse models for the first time in nearly a decade. These new models are just hitting their stride. Domestic deliveries of the Chevy Equinox reached 26.405 units last month, up 50.3% year over year. Meanwhile, Traverse deliveries surged 41.5% to 11,627 units. 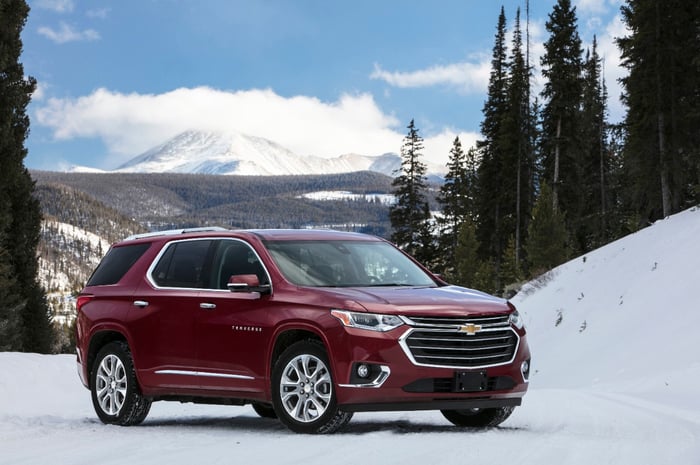 The all-new 2018 Chevy Traverse is off to a good start. Image source: General Motors.

Another mixed bag for the Blue Oval

While General Motors continued to fire on all cylinders last month, Ford came up short once again. Total deliveries declined 6.6% year over year, while retail sales were down by 4.3%.

Truck sales remained strong for Ford in January; the F-Series lineup had its best start to a year since 2004. The recently updated Ford Expedition and Lincoln Navigator full-size SUVs are also seeing strong demand. (Navigator deliveries nearly doubled, and while Expedition deliveries fell by more than 15%, this was due to supply issues.)

On the other hand, Ford's car sales plunged again, and most of its crossover models posted sales declines as well. The one bright spot was that Ford began U.S. deliveries of its EcoSport subcompact crossover last month. That's a growing segment of the domestic market that Ford hasn't been able to participate in until now.

With 500 deliveries, the EcoSport wasn't material to Ford's January sales performance. However, Ford is just starting to build inventory of this model. It ended the month with 19,000 EcoSports in transit from overseas. As those vehicles make it to dealer lots, monthly EcoSport deliveries will rise significantly.

A question of momentum

General Motors has plenty of catalysts that should help it maintain its sales momentum. Later this year, it will begin to refresh its highly profitable full-size truck and SUV lineup with new models. GM will also roll out a second crossover for its upscale Cadillac brand in 2018, which may be followed by a new midsize Chevy crossover to fill the gap between the Equinox and Traverse.

By contrast, it could take a while for Ford to regain its momentum. The arrival of the EcoSport this year should definitely help, but subcompact crossovers are still a relatively small segment of the U.S. auto market. The return of the Ford Ranger midsize pickup and the Ford Bronco SUV could have a bigger impact on Ford's trajectory, but neither will be available for a while. For 2018 at least, GM is likely to continue gaining ground on Ford.