General Motors (NYSE:GM) is coming off a strong 2017, in which its brand-new line of crossover SUVs helped drive good sales results in both the U.S. and China.

So what's in store for GM in 2018? And how will the year shape up for GM investors? Let's take a look.

The big news: New pickups -- but not until late in the year

The big news for GM in 2018 will be the launch of its all-new full-size pickups. The Chevrolet Silverado and GMC Sierra have been completely redesigned for the 2019 model year. They're based on a brand-new architecture that takes advantage of GM's latest weight-saving methods to improve performance, towing capacity, and fuel economy. 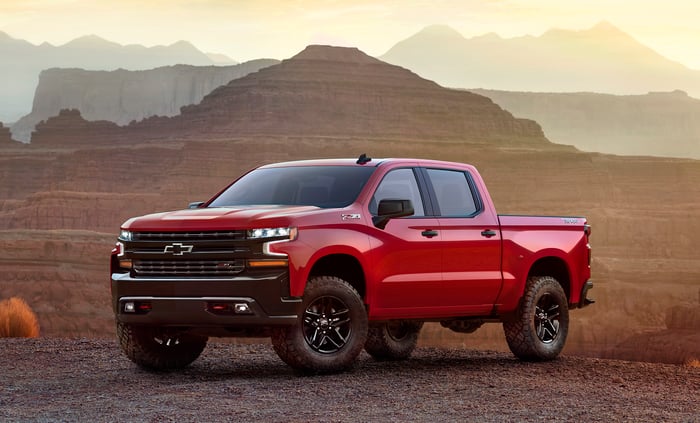 GM gave a preview of the all-new 2019 Chevrolet Silverado in December. The new Silverado will be fully revealed next week. Image source: General Motors.

There are more changes, and not just to the trucks themselves. GM is shuffling production at its U.S. factories so that it can make more of the big-selling (and mega-profitable) crew-cab versions of the trucks. And it's a safe bet that GM will follow pickup archrival Ford Motor Company's (NYSE:F) lead by adding more upscale trim lines that tempt buyers to spend more on their special trucks.

Make no mistake, these are hugely important products for GM: They sell in big numbers and generate very, very big profits. GM gave us a preview of the all-new Silverado in December, but both trucks will be fully revealed in the next few days.

They may not have a big impact on GM's bottom line this year, though: Production of the brand-new pickups isn't expected to start until the fourth quarter.

It's no secret that Cadillac's sales in the U.S. have suffered since the industrywide shift toward crossover SUVs gained momentum. The problem has been a fluke of GM's product cadence: Cadillac has several superb sedans, but it only has one crossover at the moment. That crossover, the XT5, is well-regarded -- but Cadillac needs at least two or three more to be competitive with its luxury rivals. The upshot has been a lot of lost sales, to the consternation of Cadillac's dealers.

But those dealers will have a second Cadillac crossover to sell later this year. GM officials have confirmed that an all-new Cadillac crossover called the XT4 will go into production in the third quarter, probably at GM's Fairfax Assembly Plant near Kansas City. That's a hint as to its mechanical underpinnings: Fairfax makes the well-regarded (but lately, slow-selling) Chevrolet Malibu sedan.

Another crossover for Chevrolet to challenge Ford's Edge

The Cadillac XT4 may not be the only new GM crossover this year. GM is expected to revive the Chevrolet Blazer model name for a new crossover, sized to slot in between the compact Chevy Equinox and the large Traverse.

We don't know much about the new Blazer, but it's expected to share underpinnings with the new-for-2017 GMC Acadia. It's likely to be built alongside the Acadia at GM's factory in Spring Hill, Tennessee. When will it appear? It's possible that the new Blazer won't show up until next year -- but it's also possible that it could arrive late in 2018.

GM said last fall that it would launch two new all-electric vehicles sometime between then and early 2019. We know they'll be battery-electric crossovers that use drivetrains based on the technology developed for the Chevrolet Bolt EV, that they're expected to be 2020-year models, and that one is probably a Buick.

But we don't know exactly when GM will reveal them to the public. Will we see them before the end of 2018? Maybe -- but we may not see them until early in 2019.

What about GM's self-driving car?

GM's Cruise Automation subsidiary is working hard to refine its autonomous-driving system, by racking up test miles that help the system "learn" to drive safely in more and more situations. In November, Cruise CEO Kyle Vogt said that at the current rate of development, the system will be ready to go into production in 2019. (GM defines "ready for production" as "clearly safer than a human driver." It's a high bar.) 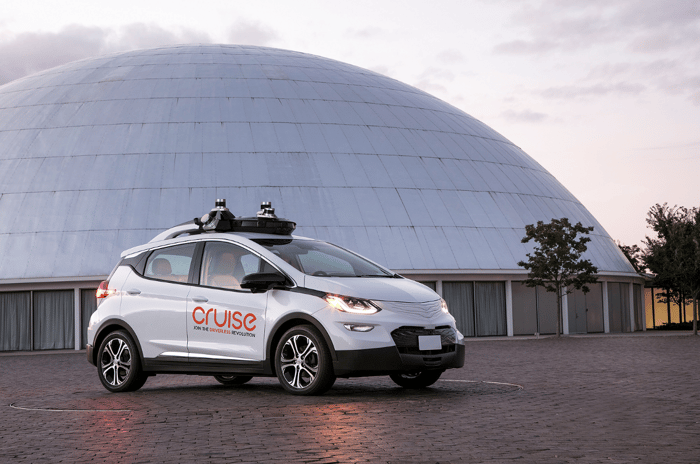 The latest iteration of GM's self-driving Chevrolet Bolt is said to be "mass-producible." It'll go into production as soon as its software is deemed safer than a human driver. Image source: General Motors.

It's certainly possible that the system could be ready ahead of schedule, before the end of this year. But whether it is or not, it's a safe bet that people in several U.S. cities will see more of GM's Chevrolet Bolt-based autonomous test vehicles running around in 2018.

GM will release its full-year 2018 guidance next week. I expect the high points will go something like this:

The upshot will probably be an expectation that GM's profits will be close to 2017 levels, maybe a bit lower. But we'll know for sure next week.