Higher prices for steel and aluminum have hurt Ford's margins. But its CFO acknowledges that there's more to the story.

If an automaker's operating profit margin is a key indicator of how well it's doing -- and it usually is -- then it's time to have some concerns about Ford Motor Company (F -1.91%).

But Ford's automotive operating margin fell to just 5% in 2017, and its pre-tax profit was down 19% from 2016. That raises some questions, starting with this one: What's going on?

To hear Ford tell it, the answer starts with steel and aluminum prices -- but it doesn't end there. 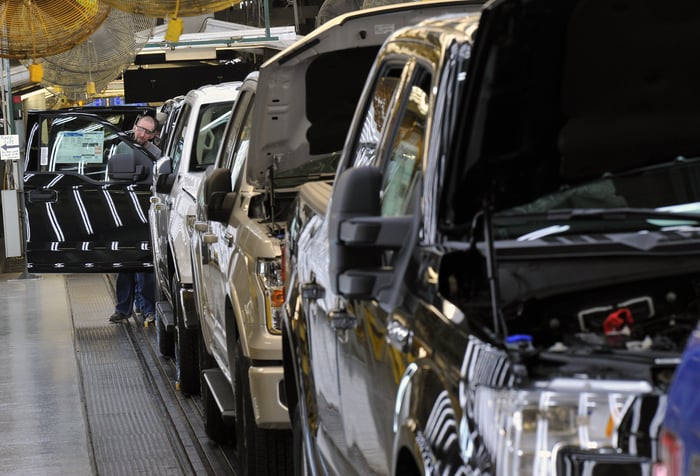 Ford executives argue that rising prices for key commodities like steel and aluminum have been a big factor in its shrinking profit margins. Given that, I asked Ford's chief financial officer, Bob Shanks, if the lower margin we saw in 2017 is the "new normal" -- something that investors should expect to live with for a while. 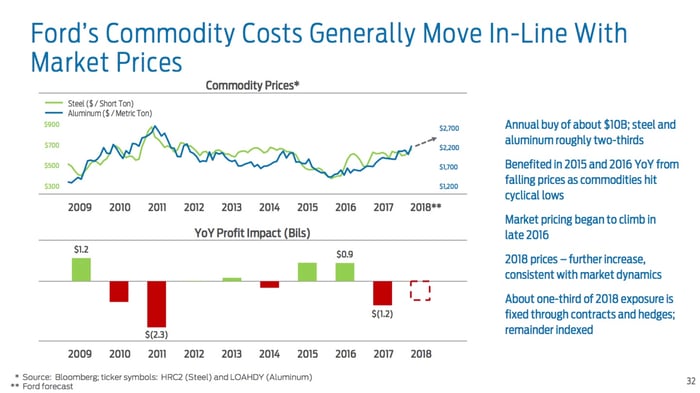 That wasn't a comforting answer: Ford's automotive operating margin in 2014 was a relatively dismal 3.4%. Is that what Ford shareholders should be expecting from now on?

But Ford knows there's more to the story

Ford knows that low margins like that won't fly in today's world. Shanks said the rising costs of key commodities is one reason why CEO Jim Hackett is so focused on improving the "fitness" of Ford's business.

Everyone is going to be affected by commodities. Their exposures may be a bit different -- I can't talk to other companies -- but what it highlights is, if you will, the overall fitness of the business. Because overall, we came in for the year at 5% in terms of automotive operating margin.

If we had a fitter business, and we were at let's say 8% [automotive operating margin], and within that we still had the kind of impact that we saw from commodities, commodities and exchange, you'd still be concerned. But you wouldn't have been as concerned because the overall business was still performing at a really strong level.

That is what we recognize as being the real issue, and what we're working to address. [Emphasis added.]

Ford's fitness-improvement plan, outlined in a presentation by Hackett last fall, targets a sustainable automotive operating margin of at least 8%. Ford will get there, Hackett has said, via a combination of cost cuts and product-line shifts that aim to reduce manufacturing complexity and boost the average profitability of Ford's vehicles.

But the improvements won't happen any time soon. Ford's guidance calls for declines in operating profit and margin in 2018, in part -- but only in part because of those higher commodities costs. As Shanks sees it, Hackett's plan won't produce meaningful improvements until 2019 or 2020 at the earliest.

Will Ford's long-suffering investors be willing to wait? We'll find out.