Ford Motor Company (NYSE:F) released its guidance for 2018 at a conference for investment analysts last week, and added some details during its fourth-quarter earnings report on Wednesday evening.

Simply put, the Blue Oval expects its 2018 profit to be lower than 2017's, largely -- but not entirely -- due to factors beyond its control. Let's take a closer look. 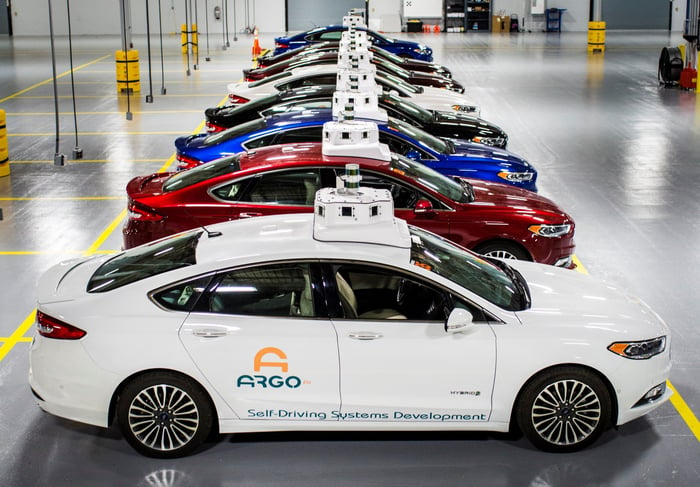 Several factors will put pressure on Ford's profits and margins in 2018, including its plan to increase spending on autonomous-vehicle development. Image source: Ford Motor Company.

Ford thinks its revenue will be strong in 2018

First and foremost, Ford expects its 2018 revenue to be flat or slightly higher than its 2017 result. On the one hand, CFO Bob Shanks said at last week's conference, Ford expects slowing sales in the U.S. to be a headwind. That's a real concern: The U.S. new-vehicle market is likely past its cyclical peak, and while sales are still strong, competitive pressures on Ford's pricing are rising.

On the other hand, Shanks said, Ford expects to largely offset those headwinds with some new products, the ongoing shift in consumer preference away from (lower-profit) sedans toward (higher-profit) SUVs, and with better results from growing markets in Brazil, Europe, and China.

But despite the possible increase in revenue, Ford expects its profit to fall in 2018.

But Ford's earnings are coming under pressure

On the other hand, Shanks said, Ford is likely to sell a larger percentage of SUVs and trucks in 2018, thus improving its "mix" and net pricing. But on balance, it expects its adjusted EPS and profit margin to be lower in 2018 than they were in 2017. 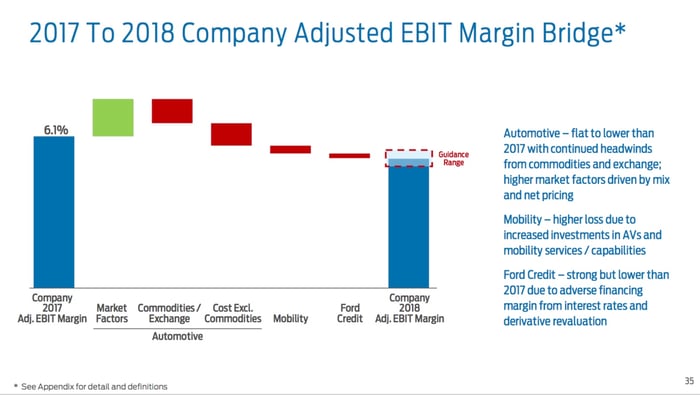 Shanks said that Ford thinks it can offset at least some of the effects of exchange-rate movements and rising commodity costs. But it isn't sure if it will be able to offset all of them, hence the range in its adjusted-EPS guidance. And he emphasized that these cost pressures aren't new.

"The changes in commodity prices and exchange rates that we've seen over the last several years have had a material effect on the business," Shanks said. 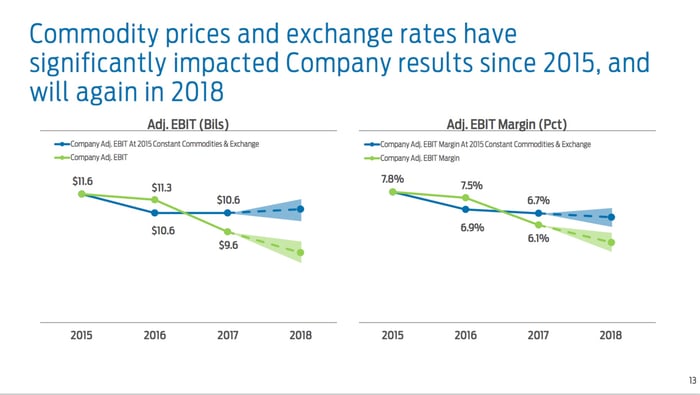 While presenting that slide, Shanks emphasized that Ford's management team isn't using these factors to make excuses for Ford's lackluster bottom-line performance since 2015. Ford's 2015 profit was a record, but it declined in 2016 and again in 2017 despite strong sales in a market that seemed to favor Ford's most profitable products.

It's also helpful, I think, in understanding the trend of the results and to the extent to which we've been able to deliver what are effectively flattish results while also absorbing increasing investments in all the areas of transformation that we've been working on.

These ongoing cost pressures serve to underscore the urgency of Ford's effort to contain rising costs and improve its financial "fitness," Shanks said.

A few more details, and the big takeaway

Shanks emphasized that Ford does expect to return to a profit-growth trajectory in a couple of years, but the company has a lot of work to do to get there.

Long story short, the takeaway for Ford investors is this: 2018 won't be great, but -- assuming the economy cooperates -- it should set Ford up for some nice improvements in the years to follow.