You've probably heard the old adage, "Sell in May and go away." This saying assumes that it's best for investors to avoid stocks beginning in late spring and not buy again until November. It's not advice you should follow, though, since investors would have missed out on nice profits selling in May and going away in four out of the last five years.

I think that investors instead should look for stocks to "buy in May and go away." In other words, find stocks that you can buy now and not worry about, knowing that their chances for generating solid gains over the next several years are really good. There are plenty of stocks that would be great choices, but in my view, one stands out. Here's why Vertex Pharmaceuticals (NASDAQ:VRTX) is my top stock to buy in May -- and then go away. 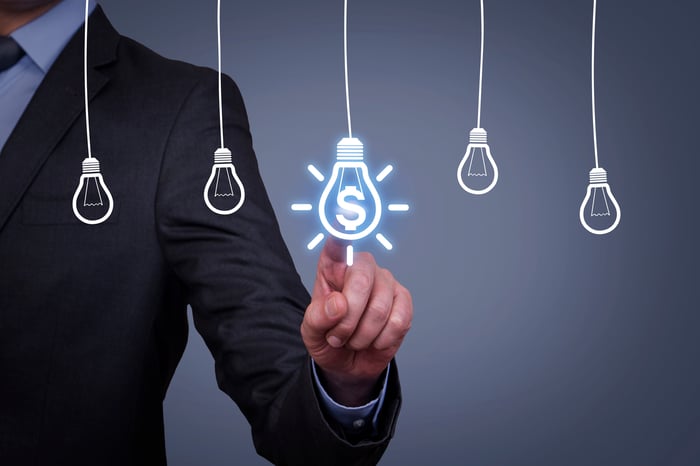 Warren Buffett and Elon Musk engaged in something of a verbal tussle in recent days over the value of moats. Buffett is a big fan of companies that are like a castle with a moat around it to protect it; the analogy refers to a strong competitive advantage. Elon Musk, on the other hand, thinks that the "pace of innovation" is more important than a moat.

What's my take? I like companies to have moats, with a fast pace of innovation being part of that moat. Vertex falls into this category. The biotech currently enjoys a near monopoly in treating cystic fibrosis (CF). Around 75,000 people across the world have CF, a genetic disease that can cause breathing problems.

Vertex has three CF drugs on the market: Kalydeco, Orkambi, and Symdeko. The drugs are called CFTR modulators because they help ensure that CFTR proteins are produced correctly instead of being misfolded. An estimated 44,000 CF patients have specific gene mutations that can be treated by these three drugs.

There are other CF treatments available to patients, including antibiotics to fight bacterial infections in the lungs and mucus thinners that help clear airways in the lungs. However, there aren't any other CFTR modulators approved for treating the underlying cause of CF. That gives Vertex pretty close to a monopoly in treating the disease.

Plenty of options for growth

Vertex still has a nice runway for growth ahead of it in treating CF. The biotech has three phase 3 clinical studies in progress evaluating triple-drug combinations in treating the disease. These triple-drug combos have the potential for addressing another 24,000 CF patients in addition to the patients that can be treated with Kalydeco, Orkambi, and Symdeko, leaving only 7,000 CF patients without a treatment for the underlying cause of the disease.

The company doesn't plan on leaving those remaining patients without an effective treatment, though. Vertex has partnered with CRISPR Therapeutics (NASDAQ:CRSP) to develop gene-editing therapies to address the CF mutations that CFTR modulators can't treat.

But CF isn't the only disease that Vertex is targeting. It's moving ahead with CRISPR Therapeutics on clinical studies of gene-editing therapies for blood disorders beta-thalassemia and sickle cell disease. Vertex also expects to report data from phase 2 clinical studies of experimental pain drug VX-150 later this year.

In addition, Vertex has programs targeting several other indications. CEO Jeff Leiden stated earlier this year that the biotech wants to develop treatments for diseases that "smell and look a lot like CF." He added that Vertex doesn't have to be successful in all of its efforts or even half of them. All the company needs is one or two successes in addition to its CF program to generate significant growth for a long time to come.

Some risks -- but none to lose sleep over

Like every other stock, Vertex has some risks. I think that there are three primary types of risk for the biotech.

One is that Vertex could experience clinical setbacks. As a case in point, the Food and Drug Administration (FDA) is requiring that the company conduct more studies of one of its triple-drug combos because the agency considers VX-561 as a new chemical entity. Vertex had hoped the combo could move into phase 3 studies since VX-561 is a deuterated version of already-approved Kalydeco. Deuterated versions, by the way, are where one or more of the hydrogen atoms contained in the drug have been replaced by its heavier stable isotope deuterium.

This isn't a huge issue for Vertex, though, because the biotech has several other triple-drug combos that are now in phase 3 testing. However, it does underscore that problems can arise in advancing candidates through the pipeline.

Another potential issue for Vertex is that it might not have its near monopoly for too much longer. Galapagos recently began its first clinical study of a triple-drug combination for treating CF. AbbVie partnered with Galapagos on its CF program.

How concerning is the threat of competition to Vertex? Not as much as you might think. The biotech should be in good position to launch one or more of its triple-drug combos first. This first-mover advantage could be significant. CF patients aren't likely to switch from a therapy that works for them, so AbbVie and Galapagos could find it difficult to take patients away from Vertex.

Probably the biggest risk for Vertex is that its growth could be less steady than investors would like. High growth expectations are already baked into the stock price, which means any blip could cause the stock to fall. Many CF patients are in Europe, where reimbursement for new drugs has to be negotiated on a country-by-country basis. Delays in finalizing reimbursement deals could negatively impact Vertex's growth.

Again, though, I don't think this is a risk to lose any sleep over. Sure, Vertex might have a quarter or two along the way that doesn't meet Wall Street expectations. However, over the long run, CF patients will be able to access the company's drugs.

I don't own shares in Vertex right now, but I plan to put my money where my mouth is. The biotech stock truly is my top stock to buy in May -- and that's exactly what I'm going to do. While I'll definitely keep tabs on Vertex, I plan on holding on to it for quite a while. My hunch is that "buy in May and go away" will work out a lot better than "sell in May and go away."