Please ensure Javascript is enabled for purposes of website accessibility
Log In Help Join The Motley Fool
Free Article Join Over 1 Million Premium Members And Get More In-Depth Stock Guidance and Research
By Ashraf Eassa - May 8, 2018 at 7:17AM

Intel was quiet about this, but it's a huge deal.

Chip giant Intel (INTC -2.20%) is what is known as an integrated device manufacturer, or IDM, meaning the company both designs its own chips and manufactures them. Most chip companies don't manufacture their own chips but instead outsource their designs to third-party contract chip manufacturers.

Intel's chip manufacturing organization was long known as the Technology and Manufacturing Group (TMG). Historically, TMG was the superstar within Intel, as its relentless pace of execution was a key enabling factor in Intel's success in the marketplace.

In recent years, though, Intel's manufacturing group has gone from the crown jewel of the company to a millstone around the neck of the product development groups. TMG has struggled to migrate to next-generation chip manufacturing technologies on time, which has led to multiyear product delays and a subsequent erosion in the company's competitive positioning in critical markets.

Back in February, a trusted source told me that Intel's TMG was set to report to Murthy Renduchintala, Intel's chief engineering officer and the group president of the company's Client, Internet of Things, and System Architecture (CISA) organization. In April's announcement of the hiring of chip industry veteran Jim Keller to lead the company's Silicon Engineering efforts, Intel also publicly confirmed what my source told me, revealing a new title for Renduchintala. Let's go over that confirmation, why Intel made this change, and what it means for Intel's future. 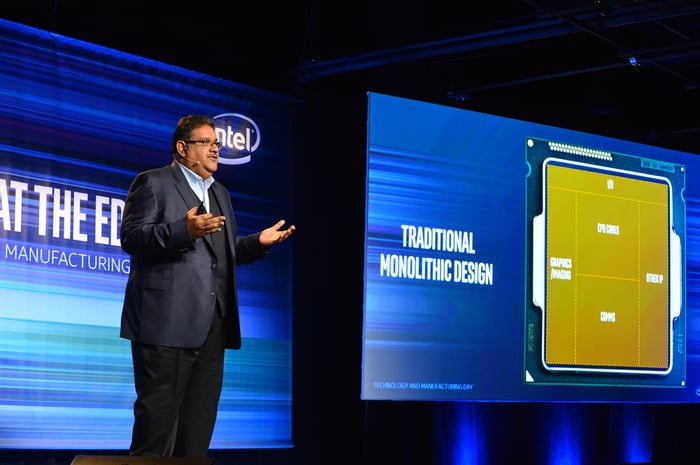 What we see here is that CISA has now become TSCG. This suggests two things. The first is that Renduchintala's group isn't in charge of Intel's Internet of Things organization any longer -- a sensible move considering that Intel hired Arm veteran Tom Lantzch to run that group.

The second and more important bit is that Renduchintala's group is now responsible for "Technology," which includes the company's chip manufacturing technology development.

Renduchintala hasn't replaced the general managers of what was formerly TMG -- that organization is co-run by Sohail U. Ahmed and Dr. Ann B. Kelleher -- but as I understand it, those two report directly to Renduchintala instead of directly to Intel CEO Brian Krzanich.

Why make this change?

I believe that this change represents a fundamental shift in mindset at Intel. When TMG was a stand-alone entity, it was on equal footing with Renduchintala's organization -- they worked together to ensure that Intel's manufacturing technology and product development groups were synchronized to ensure that Intel got competitive products out on time.

Ultimately, though, it seems that the change was due to the recent struggles that TMG faced, particularly with yield issues leading to yet another delay of the company's 10nm technology and all of the products intended to be built on it. My guess is that Renduchintala was extremely unhappy that his group's efforts were being derailed by TMG's poor execution, which led Krzanich to put TMG under Renduchintala's watch.

The fundamental change is likely to be this: Intel's manufacturing group will exist to serve the product development groups -- not the other way around as it has been in the past.

This organizational change is unlikely to have any near-term impact. Intel's 10nm issues are likely the result of an overly aggressive technology definition, and it's far too late for Intel to change that technology definition. The company needs to bite the bullet and make 10nm work, and do so in a reasonable time frame.

I suspect that Renduchintala's influence on the company's manufacturing road map will be felt beginning with the 7nm technology generation, which could go into mass production as early as 2020, and beyond. My hope is that Renduchintala's push to focus on products first and manufacturing technology as just one key ingredient to support those products will lead to a healthier, more competitive Intel in the years to come.