Please ensure Javascript is enabled for purposes of website accessibility
Log In Help Join The Motley Fool
Free Article Join Over 1 Million Premium Members And Get More In-Depth Stock Guidance and Research
By Nicholas Rossolillo – Updated May 10, 2018 at 11:41AM

The first-quarter numbers were good, but the future looks even better.

A progress report on Iridium NEXT

Iridium NEXT, the company's next-generation satellites, are almost complete. Confirmation was made that the next launch -- number two of four slated for 2018 that will complete the constellation -- is scheduled for May 2018 via SpaceX.

CEO Matt Desch commented that there have been some start-ups entering the satellite-based telecom space as of late. Despite that development, Iridium feels its competitive environment is actually improving. Many of the new start-up's services are complementary to what Iridium offers, but some of Iridium's peers are getting impacted and have no path for updating their satellites. As a result, management sees a clear runway ahead in delivering 10% to 12% service revenue growth in 2018, and 26% service revenue growth for 2019. 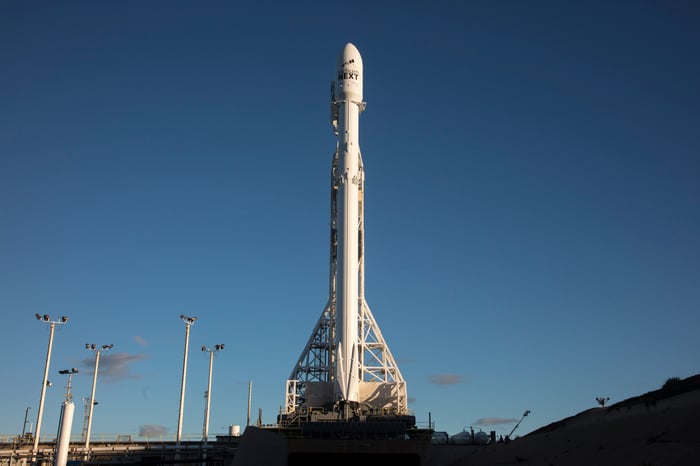 Though the $3 billion NEXT hardware upgrade isn't finished, Iridium is already seeing benefits. Most of the company's telecom traffic has migrated to the satellites already deployed -- giving a bump to performance and quality for existing customers -- and the company's new CERTUS multi-service platform underpinned by NEXT launched in the first quarter. The service is the only one that covers the whole surface of the globe and combines voice, messaging, data, and safety services into one package. Network speeds will continue to increase as the satellite constellation finishes deployment through this year.

Total subscribers also increased as the new services slowly come online. Billable subscribers in the quarter increased 15% year over year to just shy of 1 million. Commercial Internet of Things (IoT) data connections led the way higher. Average revenue per unit also stabilized, with voice and data increasing 5% and IoT coming in at 0%. In 2017, revenue per unit was 0% for voice and data and fell 7% for IoT.

A quarterly beat wasn't bad either

All of the above added up to top- and bottom-line numbers that exceeded investor expectations. Total revenue was $119.1 million, a 14% year-over-year increase. Earnings per share were $0.10, down from $0.30 a year ago, but that was good news considering the elevated expenses the company is paying as it finishes deploying its NEXT satellites. Service revenue guidance for 2018 (mentioned earlier) remained unchanged with a 10% to 12% increase.

All said, this was a solid report that Iridium turned in. The telecom continues to attract new enterprises to its platform even before its next-gen technology is fully deployed. That bodes well for the company and keeps it on track toward hitting its revenue goals for 2019.