It wasn't that long ago that concerns about a downturn in the truck trailer business had investors concerned that Wabash National's (NYSE:WNC) best days were behind it. Those concerns seem to have been overblown, though, as demand for Wabash's products were high enough for management to raise its sales guidance for the year.

Nowadays, another question has popped up that Wabash needs to address. Can it reverse the trend of declining margins? Let's take a look at the company's most recent earnings report to see what's going on with the company's operating profits and what it will take to turn them around.

Wabash's first quarter results were the kind of results that make it difficult to determine if they were good or bad. On the one hand, revenue grew considerably from this time last year thanks to strong demand for trailers -- 13,700 vs. 11,000 last year -- as well as the addition of its Supreme Industries acquisition. Conversely, margins continue to decline as raw material prices and additional labor costs eat into those profits. The only thing that allowed Wabash to produce a higher earnings per share result was a lower corporate income tax rate.

Management said in its press release that this was the low point of margins as it passes along price increases on products and some higher than usual R&D spending rates decline as it introduces some new products to market. Those are all encouraging things to hear, but it would be even more encouraging if we were to see some of these things happen and lead to higher margins.

The other peculiar thing in Wabash's most recent results was the absence of free cash flow in the quarter. This is probably not that big of a deal as the company had a large build in working capital this past quarter. As that working capital gets drawn down throughout the year, it should lead to better cash flow. 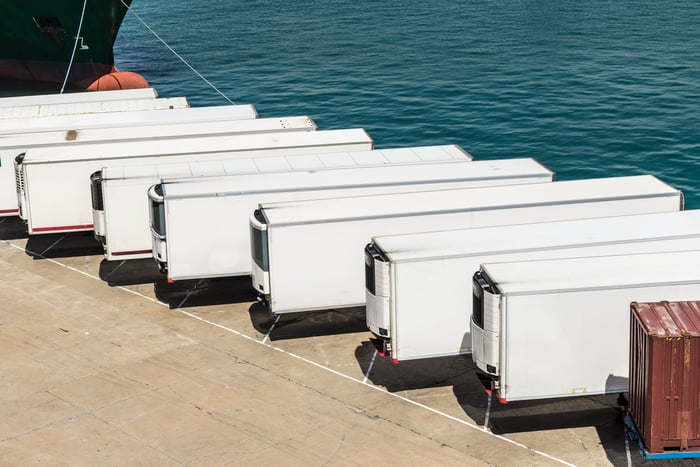 The manufacture and sale of truck trailers, tanks, and truck mounted bodies is a cyclical business that tends to follow regular replacement cycles. Years 2014-2016 were excellent for this business and there were a lot of signs that it was the peak of the most recent replacement cycle. That may not be the case, though, as the trucking business is absolutely booming right now and there is both demand to replace and add capacity. Here's CEO Dick Giromini describing the industry backdrop in 2018 and how that is translating to Wabash's business.

At the macro level, GDP remains strong, consumer confidence is high and housing starts continued to climb. Just to highlight a few key indicators. At a more micro level, carrier profitability is strong, spot rates are at elevated levels, truck tonnage, load availability and truck utilization are off the charts and quote and order activity are on a path to set all-time records.

ACT and FTR [two freight and trucking research groups] are both extremely bullish in their views of the overall demand for trailer equipment, with FTR to forecast 305,000 units of production while ACT is now forecast all-time time record of 320,000 units to be produced this year. The one caveat to all this will be the ability for the supplier community to support this elevated level of demand for the industry.

Here at home, we now sit on record backlog levels, supporting an improved pricing environment and allowing for more clarity in our prospects for the balance of the year. When taking in all of the above factors, including the expected process and productivity improvements throughout the operations, we would now expect to see Wabash National shipments in the 58,000 to 62,000 unit range or an increase of 2,000 units from our prior guidance. 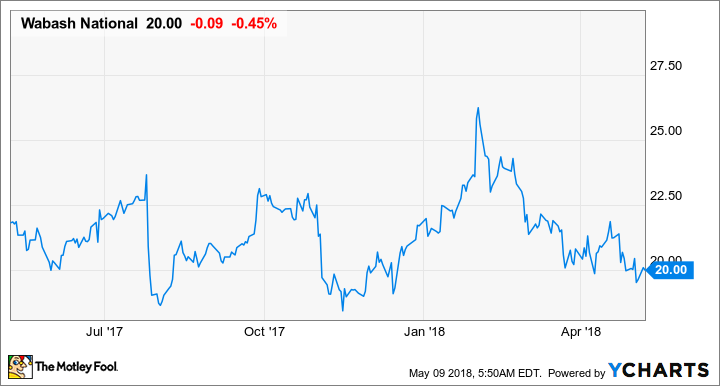 All eyes on margins

This replacement cycle in the trailer business is a golden opportunity for Wabash if it can seize it. The company's backlog is looking great and it's looking likely that we could see that grow even more as many trucking and logistics companies are ramping up capital spending to add capacity. The question for investors is whether Wabash will have the ability to translate this revenue opportunity into bottom line results. While management has said this is the nadir of its margins as it passes along pricing increases to customers and integrates its Supreme acquisition, this was the fifth straight quarter of margin declines.

Wabash's stock currently trades at a reasonable enterprise value to EBITDA ratio of 8.7 times and the fears of a downturn in the trailer manufacturing business seem overblown. If the company really can deliver on margin improvement, then it is an interesting stock to consider.