Please ensure Javascript is enabled for purposes of website accessibility
Log In Help Join The Motley Fool
Free Article Join Over 1 Million Premium Members And Get More In-Depth Stock Guidance and Research
By Keith Speights – May 10, 2018 at 6:32AM

This beaten-down biotech stock should still be a solid winner for patient investors.

Nine years. That's how long the current bull market has been going. As you might expect, the stock market is now priced at a historic premium by several commonly used metrics. But even in a rich market, there are individual stocks that offer investors significant value.

I think that Celgene (CELG) is definitely one of them. The stock has plunged 40% since Celgene reported disappointing results in October for once-promising Crohn's disease drug GED-0301. But that drop has made this big biotech stock a big bargain. 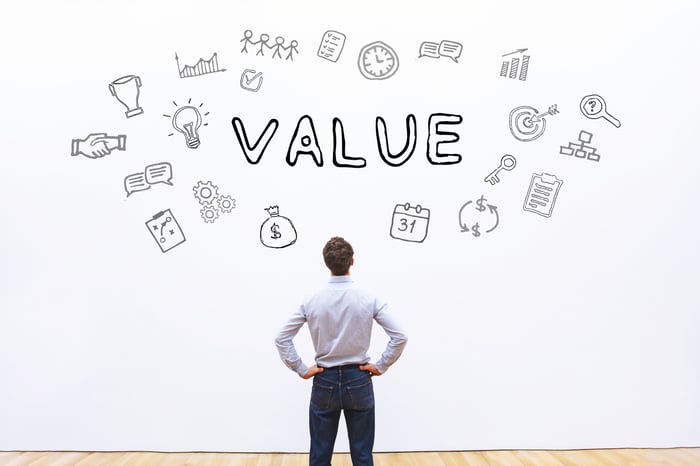 Celgene's trailing-12-month earnings multiple of more than 22 might not seem inexpensive. However, the problem with using valuation metrics based on past financial results is that they reveal nothing about what's really important: how well the company should perform going forward.

That's why I like to look at valuation numbers that incorporate growth projections. Sure, those projections could miss the mark. Growth-based valuation metrics can still be pretty useful, though.

Celgene stock currently trades at less than eight times expected earnings over the next year, according to Thomson Reuters. This kind of low valuation is rare for a biotech with a market cap the size of Celgene's.

Attempting to project growth further into the future is trickier. Still, many investors like to use price-to-earnings-to-growth (PEG) ratios that incorporate five-year earnings growth estimates. A PEG ratio of less than one indicates a relative bargain. Celgene claims a PEG ratio of 0.5 -- lower than nearly every biotech stock on the market.

Why Celgene stock is so cheap

There are three primary reasons why Celgene stock is trading at such a bargain-bin price right now. One reason relates to the major late-stage clinical flop for GED-0301. Prior to the disappointing results from the phase 3 clinical study for the drug, Celgene had projected peak annual sales for GED-0301 of more than $2 billion.

But the GED-0301 clinical failure isn't the only big setback for Celgene. On Feb. 27, the biotech announced that it had received a Refusal to File letter from the U.S. Food and Drug Administration (FDA) for the submission of ozanimod in treating multiple sclerosis (MS). It's very rare for a big drugmaker to receive a Refusal to File letter. Celgene simply didn't have its act together.

Ozanimod is viewed as one of the crown jewels in Celgene's pipeline. The company expects peak sales for the drug between $4 billion and $6 billion, assuming it wins approval in treating MS and two other inflammatory bowel disease indications. Celgene now must gather more data for the FDA. The biotech won't be able to submit ozanimod for approval in treating MS until the first quarter of 2019.

The third reason behind Celgene's low valuation is a potential threat to the biotech's top drug Revlimid. Celgene is fighting a patent challenge over Revlimid from Dr. Reddy's Laboratories (RDY -0.04%). The hematology drug currently generates 63% of Celgene's total revenue.

How reliable are those growth projections?

All three of these reasons behind Celgene's low valuation point to one overriding concern: The company won't grow nearly as much as expected. Celgene remains highly dependent on Revlimid, so any threat to the drug is scary. The company's missteps with GED-0301 and ozanimod raise doubts about whether or not Celgene's pipeline will deliver as hoped.

So how reliable are those growth projections on which Celgene's low valuation metrics are based? I think the one-year estimates of earnings growth in the ballpark of 20% should be attainable. Celgene reported year-over-year revenue growth of 20% in the first quarter and adjusted earnings per share (EPS) growth of 23%. The company's key products continue to perform very well, with no signs of slowing down anytime soon.

Both Celgene and Wall Street analysts project five-year EPS growth of nearly 20%. Again, I think that the biotech will be able to meet that level. In my view, worries about Celgene's pipeline risks are overblown. Ozanimod is delayed, but the drug should still have a really good shot at winning approval. Despite the GED-0301 loss, Celgene still has several promising candidates with blockbuster sales potential, including fedratinib, luspatercept, and JCAR017.

But what about the threat to Revlimid? Celgene has already settled with Natco Pharma in an agreement that allows Natco to market a generic version of Revlimid in the U.S. at limited volumes beginning in March 2022. Those volume limitations would be lifted after Jan. 31, 2026. I think it's likely that Celgene will ultimately strike a similar deal with Dr. Reddy's.

Neither the GED-0301 failure nor the ozanimod delay justifies Celgene's current dirt-cheap share price. If Revlimid was truly in danger, the low price would be understandable. But investors knew about the patent challenges to Celgene's top drug well before the stock tanked. I think that the market is focusing primarily on the short-term issues. That presents a great opportunity for investors with a long-term perspective.

Celgene continues to enjoy strong sales and earnings growth, thanks to a stable of blockbusters. The company is generating solid cash flow. Its pipeline is loaded with potential winners. Over the long run, Celgene should provide attractive returns to patient investors. This biotech stock probably won't remain such a bargain for too much longer.