Please ensure Javascript is enabled for purposes of website accessibility
Free Article Join Over 1 Million Premium Members And Get More In-Depth Stock Guidance and Research
By Maxx Chatsko - May 10, 2018 at 6:32AM

This utility is retiring coal plants ahead of schedule and investing billions in renewables, which could supply 45% of its power by 2027.

Things are moving fast in renewable energy. Really fast. Consider that in 2008 wind farms supplied just 1.5% of all electricity in the United States. But by 2019 wind power is expected to contribute 6.9% of American electricity and overtake hydropower as the top renewable energy source.

The rise of wind power wouldn't have been possible without two companies in particular, which combine to own 20.7 gigawatts of wind capacity, or about 24% of the country's total. Investors wouldn't be surprised to learn that clean energy provider NextEra Energy is one of the renewable energy stocks most important to American wind power. However, the relatively unheard of natural gas and electric utility Xcel Energy ( XEL 0.66% ) doesn't seem to garner nearly the same level of attention. Overlooking it could be a mistake.

With 10-year total returns of 226% and plans to grow its dividend and EPS at annual clips of 5% to 7% -- all while investing billions in new wind and solar capacity -- it could be the best renewable energy stock you've never heard of.

One look at Xcel Energy's geographic footprint shows why it's a leading player in wind power. All of its operations are located in the American wind corridor from the Dakotas to West Texas. The region is home to the majority of the nation's wind capacity, including all of the company's 6.7 GW.

That will make it a lot easier to reach the long-term goals to shift its generation mix away from fossil fuels and toward renewable energy. Consider how the company's generation mix has changed and is expected to change over time:

Early retirements of coal-fired power plants and pouring billions into renewable energy have reduced Xcel's carbon emissions 35% from 2005 to 2017. Using 2005 as a baseline, Xcel Energy is targeting 50% reductions in carbon emissions by 2022 and greater than 60% by 2027. The next phase will be driven by $4.25 billion of investment into renewables between this year and 2022. Most of it will fund over 3 GW of new wholly owned wind capacity, boosting the company's total installed capacity 46%.

It's all part of the "steel for fuel" strategy. The idea is simple: Xcel Energy will replace perpetual fuel expenses from traditional power sources, such as coal, with "steel in the ground" for wind turbines, which don't require fuel inputs once installed. The company's advantageous position in the American wind corridor and the installation of highly efficient turbines have already proven the strategy. Fuel expense fell from 44% of electric revenue in 2013 to less than 39% in 2017. It was a win-win for shareholders and the company's electric utility customers: average monthly bills dropped from $83.52 to $81 in that span. 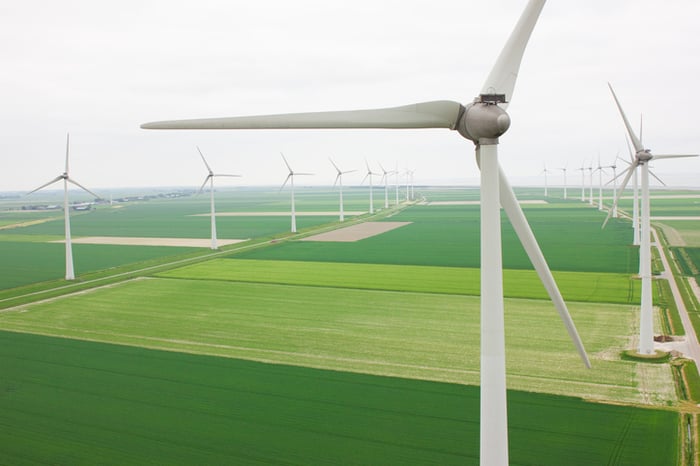 When combined with rate increases from state regulators, lower fuel expenses helped to boost Xcel Energy's net income 17% from 2013 to 2017. That's despite revenue growth of just 4.5% in the period. In fact, renewable energy investments have allowed the company to grow EPS at a compound annual growth rate of 5.9% from 2005 to 2017. The dividend has grown 6.3% annually from 2013 to 2018.

That track record should give investors confidence that the company can deliver on its goals of growing EPS 5% to 6% per year and the dividend 5% to 7% per year. And in case investors aren't convinced, fuel expenses are projected to fall to just 28% of electric revenue by 2027, freeing even more cash flow for reinvestment into the business or redistribution to shareholders.

Similarly, Xcel Energy's renewable energy leadership should provide confidence in its ability to deliver on the next phase of the growth plan, from 2022 onward, which includes a stronger focus on solar power and energy storage. Right now, however, the focus is on the nearer term.

The main focus is on an upcoming decision from state regulators in Colorado on the company's proposal to shutter 660 MW of coal and replace it with 1 GW of new wind, 700 MW of solar, and another 700 MW of natural gas or energy storage. If given the green light in summer 2018, then Xcel Energy will have no remaining question marks surrounding its current investment plan that runs through 2022. The stock could respond well to the added certainty.

Is this renewable energy stock a buy?

Xcel Energy has largely flown under the radar in discussions of renewable energy stocks, but that's no fault of the company. The predominantly electric utility is a shining example of how companies can lead the United States to a clean energy future -- and proving that it can be a profitable endeavor. A healthy 3.3% dividend (and growing), falling operating expenses, and a long-term history of beating the total returns of the S&P 500 show that this renewable energy stock is worth a closer look at the very least -- and maybe even a spot in your portfolio.