Falling costs aren't the driver of wind energy's resurgence in the U.S. -- there are two more important factors driving the installation boom.

The U.S. wind industry has had a resurgence in the last few years as utilities and companies search for new renewable energy generation. That demand could be filled by solar energy just as easily as wind, but there's a good reason wind energy is the power plant of choice in the U.S. right now. Capacity factors are up over the past decade, and subsidies favor wind over other renewables. 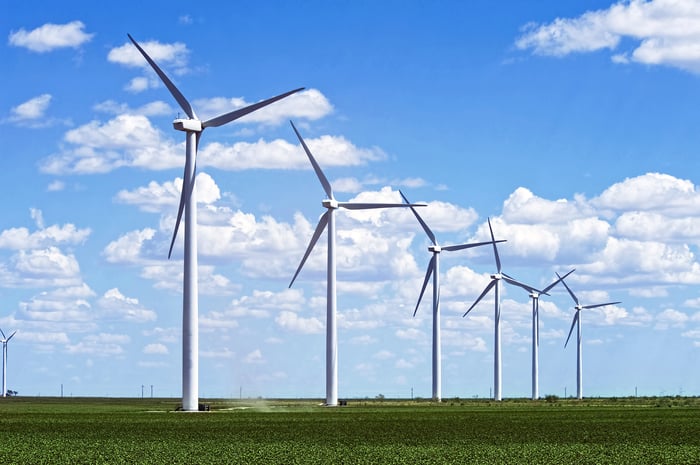 The chart below shows just how big wind energy has become in the U.S. Through the end of 2016, 82.1 GW of wind has been installed, and that figure will only grow over the next five years.

Improving technology and subsidies are working together to make wind an attractive energy source for developers today as well.

Technology is getting better fast

What's interesting about wind power is that turbines aren't actually getting cheaper on a cost-per-watt basis. The chart below shows the cost of projects since 1982; you can see that the early part of the 21st century saw projects installed for much lower cost than they are today. 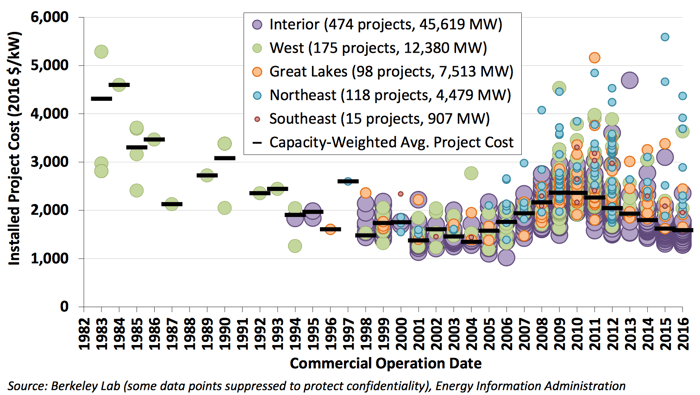 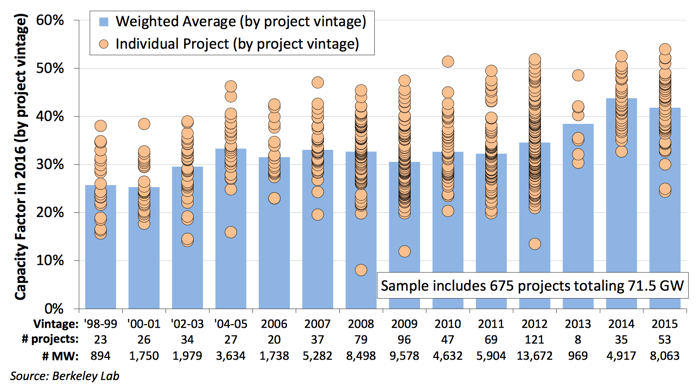 On top of the higher capacity factor, wind projects are benefiting from a more advantageous subsidy environment than competing solar projects.

Wind and solar have both seen their cost of electricity fall over the past decade, but wind has a hidden advantage right now, and it's because of the subsidy it gets from the federal government. Wind gets a production tax credit, and solar gets an investment tax credit; here's how that creates an advantage for wind energy.

If a solar system's cost is $1 per watt, has a 25% capacity factor, a 25-year useful life, and investors required a 7% rate of return, it would have a cost of 3.92 cents per kWh of electricity. A wind project with a cost of $1.80 per watt, a 45% capacity factor and the same life and return profile would have the same electricity cost of 3.92 cents per kWh.

The difference is that the solar subsidy is a 30% investment tax credit, effectively lowering the cost of a project by 30%. The result would be an electricity cost of 2.74 cents per kWh. Wind power is given a 2.4 cent credit for its production, meaning the developer would only need to charge 1.52 cents per kWh to break even.

By virtue of having a production subsidy rather than an investment subsidy, wind has a big advantage over solar in the U.S., even if their underlying unsubsidized costs for electricity are identical.

This subsidy will slowly sunset, starting with projects that began construction in 2017 when an annual 20% reduction in the subsidy begins until it's gone. But projects that began construction last year can still be built with the full subsidy, which we've seen recently at the second-biggest wind farm in the world that won't be completed until mid-2020.

The companies dominating wind in the U.S.

If wind turbine manufacturers can continue to cut costs and increase capacity factor, the industry will continue to grow. The companies with the most to gain are General Electric (GE -0.20%), Vestas (VWSY.F 2.28%), and Siemens (SIEGY -0.69%), who are top three in market share in the U.S. 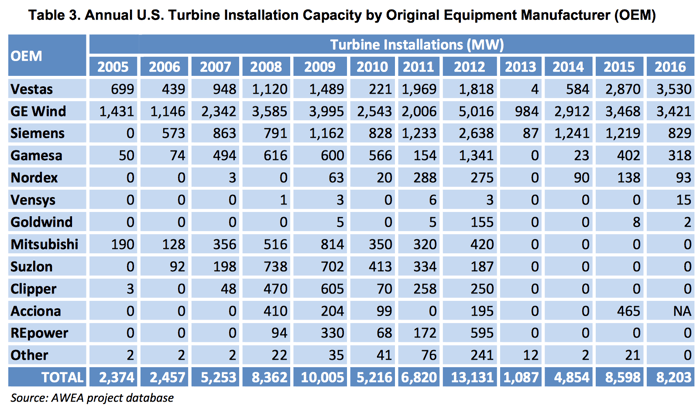 With the booming demand for renewable energy and improving technology of wind turbines themselves, I think investors should be bullish on the future of wind energy.